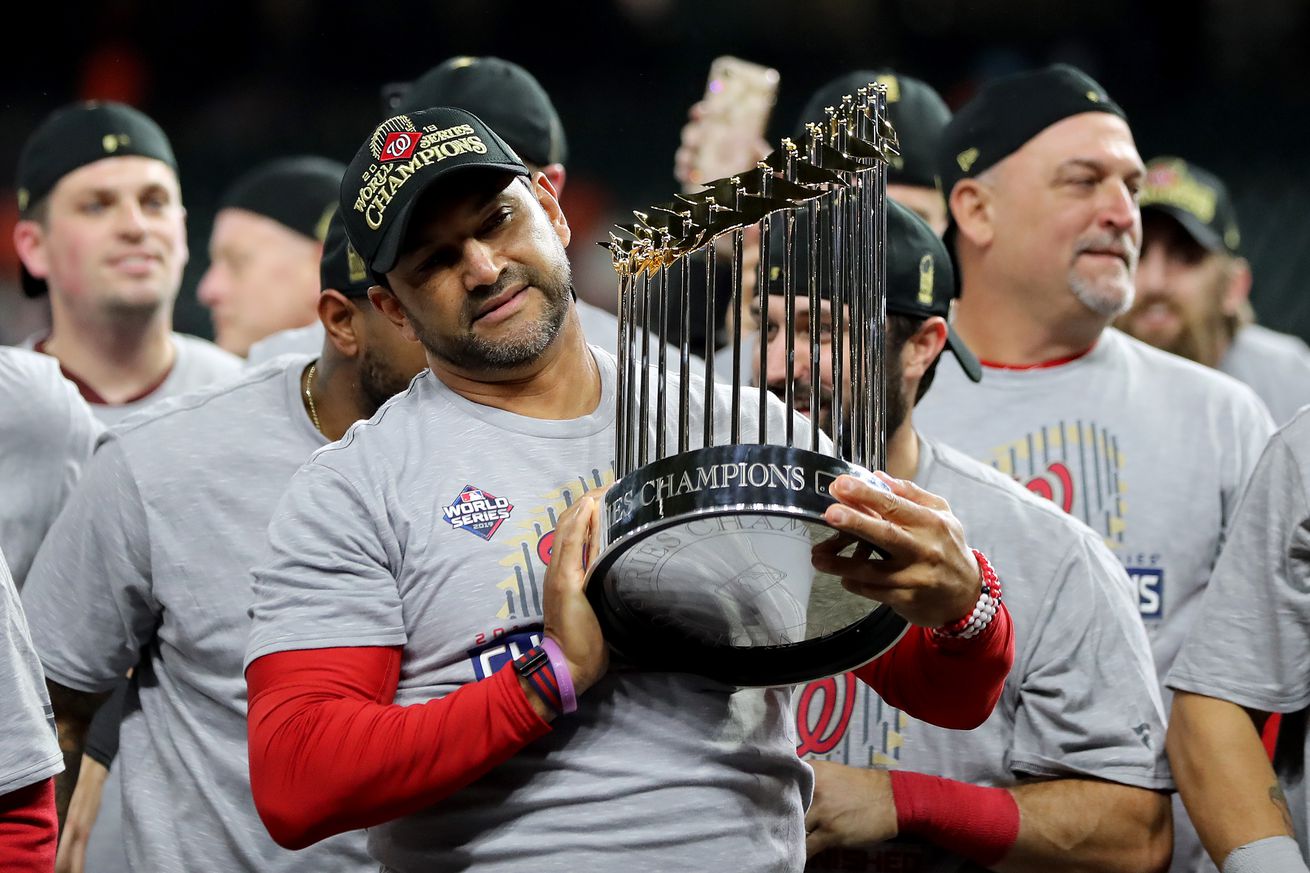 Daniel Hudson talked this week about the work Davey Martinez did to get the Nationals to the World Series.

Anthony Rendon, who is now a free agent, talked during the World Series about how he and his teammates battled back from their 19-31 start to the season to reach the postseason and ultimately win it all this year.

As he explained it, he and the rest of the Washington Nationals circled the wagons after the struggles during the first 50 games, and they were defying those who doubted the team from late May on, through the end of Game 7 of the Fall Classic.

‘I’d go back further than just the postseason, for sure, when everyone started doubting us probably the middle of the year when everyone goes back to 19-31,” Rendon said.

“But even when they were saying that, ‘We need to fire Davey,’ or ‘We need to trade so and so,’ or, ‘We need to clean house, clean the front office out,’ whatever it might be.

“I think then it was kind of where we got our attitude and said, ‘Screw everybody else, we’re not worrying about what’s going outside of our clubhouse. We have to worry about the 25 guys that are in here and that are actually grinding.’

“No offense, but nobody outside of that clubhouse knows the work that we put in each and every day and the amount of time that we’re away from our families and the sacrifices that we have to make. So that’s been our attitude for a while now.”

That attitude, and the confidence that they could turn it around, was something that Davey Martinez stressed throughout the season. How did he get the Nationals back on track? And what did the second-year manager do to keep the pressure off his players as they grinded it out and got themselves back into contention?

“I feel like he’s been the same guy for us all year,” Patrick Corbin told reporters in October.

“[He’s a] leader for us. Somebody who really has trust in his players. And we truly believe that.”

“He didn’t do anything differently. We just continued to try to get better every day.”

“He’s just kind of himself, really,” the left-hander explained.

“Every day is the same. And that’s how I think we all treat it here, we try to, at least. He doesn’t panic. He doesn’t make us do more or less. He just tries to put us in the best position to do our job well.”

Max Scherzer talked about Martinez’s mantras: “Stay in the Fight!” and “Go 1-0 every day?” What role did those oft-repeated words play in the Nationals’ run?

“1-0, I think goes back, I think that’s everybody. It’s something that he lives and dies by,” the starter said.

“But Davey and our coaching staff, I think they all deserve so much credit. And so with Davey spearheading this and understanding — pushing all the right buttons and finding ways to get creative and being a real good communicator with everything to be able to handle the pitching staff, the hitters, the bullpen, and being in constant communication with them.

“So for me, my relationship with him is really unique in the fact that — I won’t say I have a lot of say, but that he listens to different things that I bring to him and different ideas of how I want to almost kind of manage myself so that when we get in different situations in tight ball games that he’s not shocked by whatever decision that we both make.”

Daniel Hudson, who was on the mound when the final out was recorded in the Nationals’ win in Game 7 of the World Series, didn’t join the team until he was acquired at the trade deadline on July 31st, but he experienced the impact Martinez had on the team during their time together, and told MLB Network Radio hosts Casey Stern and Brad Lidge this week how the manager handled things.

“I think Davey deserves all the credit in the world, to be honest with you,” Hudson said on Tuesday.

“To have a guy in that position … expectations were high, 2018 for them, they didn’t get it done, and then they go out and spend some money in free agency and really make themselves better on paper and then they get off to the start that they had, everybody in D.C. is calling for his head and calling for his job … it’s a really tough situation for a guy to be in and to be honest with you, I don’t know another person who could handle it like he did to be honest with you. I mean, you’ve got guys — obviously he had the veteran leadership in the clubhouse to kind of reinforce everything that he was preaching, ‘Let’s go 1-0 every day,’ ‘Let’s stay in the fight,’ ‘Let’s not worry about tomorrow, let’s not worry about yesterday, let’s worry about today,’ and he just kept reinforcing, ‘Man, I promise you we’re going to be where we want to be at the end,’ and to have guys really kind of take on that mantra from him, and that cool-headedness and that level-headedness really starts with him at the top and [GM Mike] Rizzo as well, and obviously all the veteran guys in that clubhouse.”

But how did Martinez stay confident throughout it all?

“It almost seemed like a weight had been lifted off an entire fan base.” – Daniel Hudson on @MLBNetworkRadio yesterday on his interactions with #Nationals fans after the #Nats won the World Series: pic.twitter.com/a0jPwLXDoK

“To be honest with you man, I really don’t know,” Hudson admitted. “Like I said, it just takes a very special person to be able to do that. To keep that level-headedness, that cool-headedness that he has throughout all that stuff. If he was worried about something, he did not show that in the clubhouse one bit. I know that hearing from other guys throughout that whole tough stretch in April and May and even when things got weird kind in the middle of the season as well, I mean trade deadline comes and I come in and he couldn’t have been better towards me when I came in, more accepting, more welcoming, so and then every day since I showed up, like I said, he’s just the same guy every single day, no matters if he won or we lost, he’s coming in the the next day with a positive attitude and ready to go and try to win that day.”

Will Martinez be able to motivate his club, which could look a lot different come Opening Day in 2020, to do it all again?