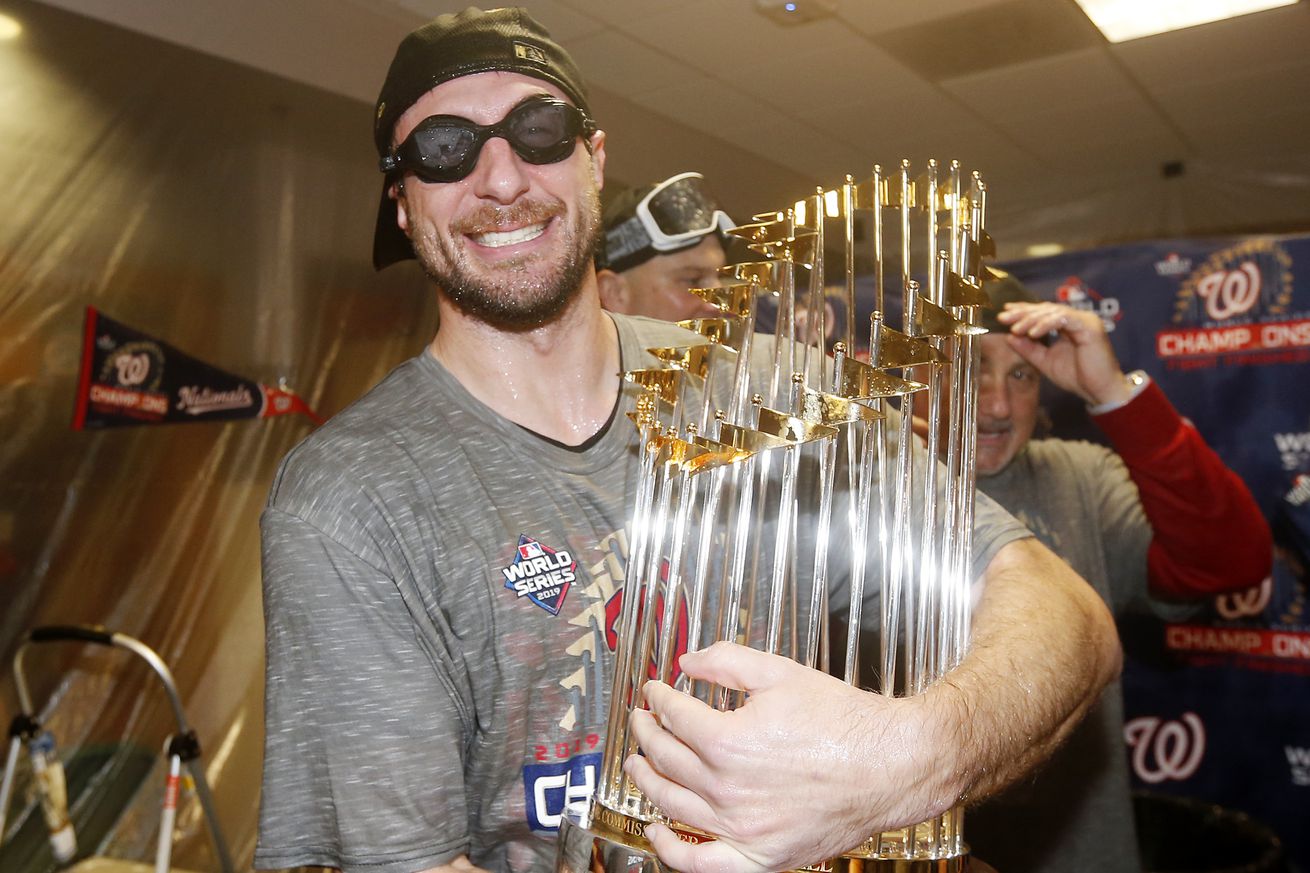 Max Scherzer landed on the Injured List twice in the regular season, then missed his Game 5 start in the World Series — before starting Game 7. How will he change things up after a frustrating, but ultimately successful 2019 campaign?

The news that Max Scherzer might not be able to go in Game 5 of the World Series made its way around the press box before it was officially confirmed by the team, and when second-year manager Davey Martinez made the announcement he said the 35-year-old starter tried everything he could to get on the mound before bowing out.

“He said he woke up like that yesterday,” Martinez explained, “and like I said, he spent all day getting treatment. And today he just locked up. Just spasm, neck’s jacked up. He was just — he was in a bad place.

“When I woke up this morning I was completely locked up,” Scherzer said.

“It’s not just a muscle spasm. In talking to the doctors here, the nerve that’s in the neck is all jammed up. Thankfully from the doctors, what they say, as long as I have no numbness coming down my arms or anything, you don’t actually deal with any serious, any long-term damage here. It’s just the sensory that’s pinching up the nerve in the neck and the trap, the whole muscles that surround your neck are just completely locked up in spasm.

“So for me it became impossible just to do any menial task whatsoever today.”

The nerve issues in his neck came at the end of a frustrating season for Scherzer, who went on the Injured List twice in July/August, as he dealt with scapulothoracic bursitis and then a mild rhomboid that limited him to four starts total between July 6th and August 28th, but he was adamant that there was no connection between the regular and postseason issues.

“The back issues are more, I’d say more like the — it’s lower back part, more the trap, lat — not trap, low trap and lat. Where it’s pinching on the bottom of the scap. That’s where a lot of those problems are coming from. This is more on the top part of the neck. It’s more the nerve irritation in the C5, C6 area where that’s pinched up and causing neck spasms.

“So I really don’t believe that the back issue I dealt with in the middle of the year really has anything to do with it. Plus I’ve dealt with other little neck spasm, little issues in the past, as well, both on the right and left side and I’ve always been able to kind of address it and keep it from really getting out of hand, unfortunately this one got out of hand.”

The Nationals lost Game 5 to the Houston Astros, falling behind 3-2 in the best-of-seven series, but Stephen Strasburg led the team to a win on the road in Game 6, so Scherzer received another opportunity to start in Game 7.

In a five-inning outing, in what ended up a 6-2 win in which he received no decision, the right-handed starter gave up seven hits, four walks, and two earned runs overall, limiting the damage in spite of the fact that the Astros put runners on against him.

“We put a lot of heat on him,” Houston’s skipper A.J. Hinch said after the Astros’ loss. “We made him work. He had almost 20 pitches an inning. We had guys on base. We hit the ball hard. We didn’t chase that much. There was a lot of good that we — almost similar to how we were in Game 1 against him where we just made him earn every out that he got.

“I’ve always been impressed by Max Scherzer from the day that I first met him back when we were both in Arizona. Congratulations to him on being a World Series Champion.”

“Max is a bulldog,” Martinez said after the decisive win.

“We saw him earlier. His location wasn’t as crisp as he wanted it to be. He fought through some unbelievable innings and he kept us in the ballgame. That’s all we can ask from Max.

“But what a fantastic job he did.”

The season as a whole, Scherzer said, after he finished third in NL Cy Young voting, was a frustrating one.

The most frustrating part, before he was forced to miss Game 5, was that the regular season issues he dealt with were something new for him, and he had to wait until he knew he could go at 100%, without causing further damage that would force him to miss more time at that crucial stage of the season, as the Nats fought their way back from 12 games under .500 in late May to make the postseason and then eventually win it all.

“That’s what the most confusing part about the whole thing [was], was knowing when I was actually, truly 100%.

“But it was something you’ve just got to take in stride, and make adjustments around it.

“There will be bigger adjustments really in the offseason programs to address that.”

How will Scherzer, who’ll turn 36 next July, change things up as he prepares for his 13th MLB campaign?