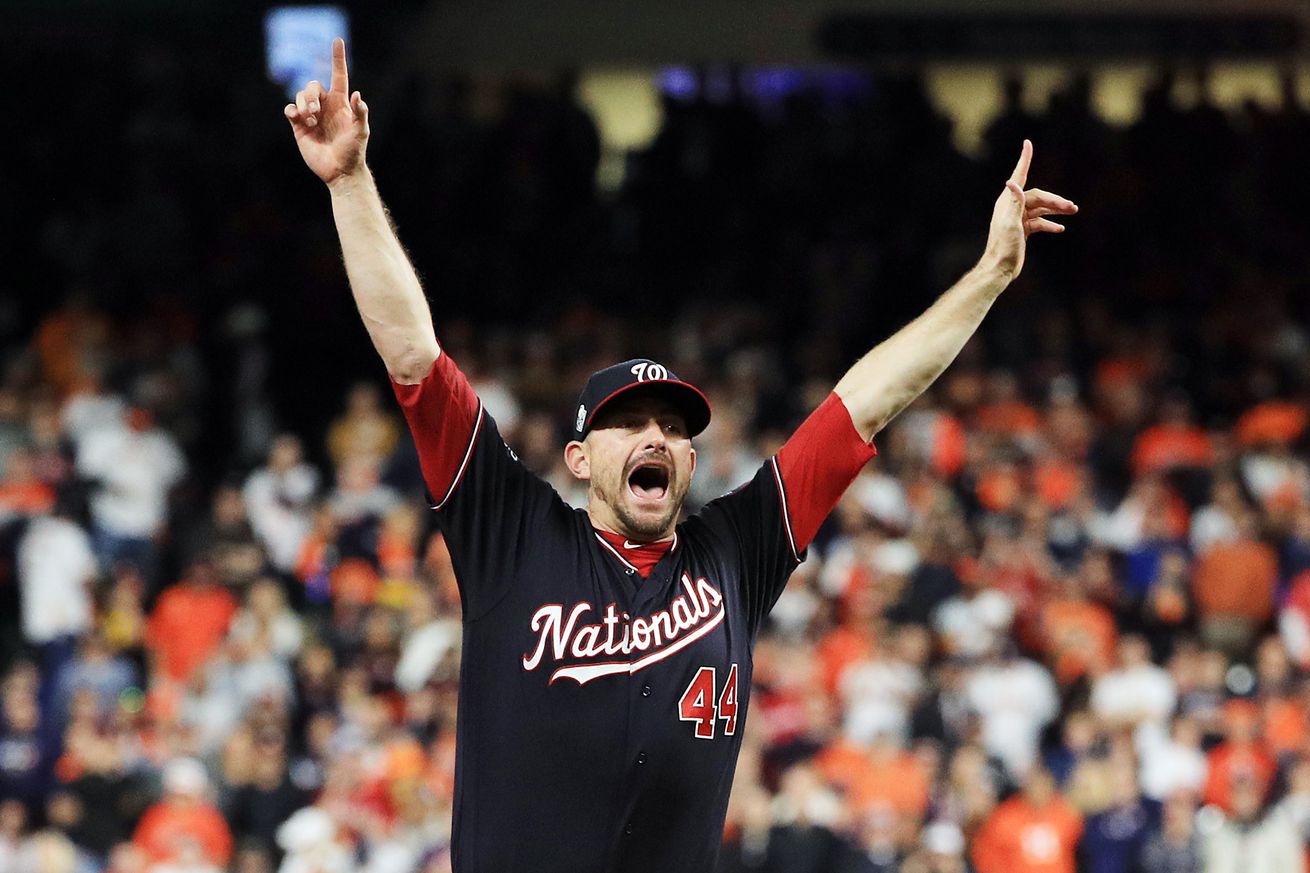 Perhaps nothing epitomized the improbability of the Washington Nationals’ World Series victory than Daniel Hudson, the man who got the final out…

Improbable. There might not be a better word to describe the run that the Washington Nationals had on their way to winning the first World Series in franchise history (2005-present).

The 19-31 start. The early-season injuries. The late-season slump. The five elimination games, trailing in all of them. All of the bumpy roads that continued to get in their way really did end up leading to a beautiful place.

Perhaps no Nationals player epitomizes the improbability of the team’s run than the man who recorded the final out in the crucial Game 7, Daniel Hudson.

Hudson has had a pretty astounding journey, not just last season, but throughout his career.

The right-hander was a top starting pitching prospect coming through the Chicago White Sox system and started his career well between the South Side and the Arizona Diamondbacks.

But adversity hit, hard. In his third season with the Diamondbacks, Hudson tore his ulnar collateral ligament, undergoing Tommy John surgery. And to rub salt in the wounds, during his rehab, he re-tore the ligament and began the arduous journey again.

The success rate of pitchers to have the surgery once has stabilized and is now seemingly a regular occurrence. But a second time? The results of those who are able to return usually crater.

It’s not been an easy road for him in the majors since coming back from the second surgery, but Hudson credits those around him for making it possible for him to get where he wanted to be.

“I’ve been through a lot of ups and a ton of downs,” Hudson told MLB Network Radio last week. “I got released a few times the last couple years, but I just think with a strong support system, your family, your friends, obviously your teammates that you play with.”

“Everybody can pick you up and help you out through all that, and you’ve just got to have the right opportunity at the right time.”

The whirlwind that was his 2019 season started by throwing yet more adversity at him. On February 13th, he was only able to secure a minor league deal with the Los Angeles Angels, eventually getting released after failing to impress in Spring Training.

“Obviously it didn’t work out for me in Anaheim in Spring Training this year,” Hudson said on MLBNR. “So I got released, and Toronto had a need and I started throwing the ball with some confidence up there after the first few weeks.”

The Toronto Blue Jays did like what they saw from him in the spring and gave him a minimal one-year major league deal. Their hope was to fix him up and trade him at the deadline for future assets with their sights largely set on 2020.

Safe to say that their plan worked and Hudson is grateful for his time north of the border.

“I really was able to kind of sit down with pitching coach and the bullpen coach there and really try to iron some stuff out mechanically,” Hudson said of his time in Toronto.

“We just got in this routine where two times out of the week, Tuesdays and Fridays I would just jump on the mound for 15 pitches no matter what, no matter what my usage was, and just really try to reinforce what we were trying to work on.

That work, the routine he got into, and the fact he was comfortable with the team led to a solid 3.00 ERA in 45 appearances with the Blue Jays, picking up eight holds and two saves.

It seemed like Hudson finally looked settled as a full-time reliever after some inconsistent years.

The Nationals believed in the revitalized Hudson, trading for him on July 31st to help try and solve their bullpen woes. Being thrust from a rebuilding team right into a pennant race was something that he relished the chance to do, thriving under the pressure.

“I think it really helped,” Hudson also said on MLBNR. “Especially throughout the month of October, but even in September as well, we were trying to fight for that Wild Card spot, and then we actually, we finally get it, and we had to win a few more games to get home-field advantage to give D.C. one more guaranteed game.”

Though Hudson was initially brought in to be a late-inning fireman, dealing with high-leverage spots when there were runners on base, his role in the bullpen ended up fluid.

When Sean Doolittle struggled and went on the Injured List, Hudson became the de facto closer. Then in the postseason, with Doolittle back, the team mixed and matched at the back of the bullpen, including utilizing its starters in relief.

“It was almost like all hands on deck,” Hudson said. “Everybody was totally on board with whatever needed to be done. There was no ego about it, there was no, ‘I’ve got to pitch in this inning,’ or, ‘I want to start, I don’t want to come out of the bullpen.’

“It’s a pretty special group when you sit back and look back at that sort of thing, where nobody was really too upset with having to do something that was outside of their comfort zone.

“So to be able to have that special group of guys and to do that, like I said, in that city, it was just, like I said, a very special month of October.”

Even with all of those great pitchers, starters and relievers alike, coming out of the bullpen, it was Hudson that the Nats usually turned to late in the game to lock down the win.

In the postseason, he finished 6 of the team’s 12 wins and recorded 4 saves while sporting a 3.72 ERA. And though it wasn’t a save, he recorded the three most memorable outs in franchise history in Game 7 at Minute Maid Park before hurling his glove toward the dugout as a delirious mob of navy blue swarmed.

“And everything that happens afterwards too, you don’t really have time to kind of sit down and reflect.”

Despite only being a member Nationals for three months after the trade, fans are going to remember his name for the rest of their lives after his contributions to the miraculous run.

“I can’t believe how many people actually came up to me and said thank you, like I actually did something for them,” Hudson told MLBNR of his interactions with the D.C. fans.

“It almost seemed like a weight had been lifted off an entire fan base, to be honest with you. So to get that kind of reaction from a lot of people was really special.”

Now, after revitalizing himself in 2019, Hudson has made himself a sought-after arm in a thin relief market. Probably even more so given that Will Smith, the consensus top reliever in free agency, signed with the Atlanta Braves just over a week ago.

Not that Hudson is too worried about free agency. He’s prepared to just let things fall as they may.

“I’ll sit here and let things come to me and not really try to stress out too much and worry about what’s in store for the future,” Hudson explained of his free agency this winter.

“I was telling somebody the other day, even if something happens and I don’t play again, I’ve done a lot in my career and I’m really happy with what I’ve done and what I’ve accomplished.

“And obviously to win a World Series on top of it is pretty much icing on the cake, so anything that happens after this is really just a bonus.”

Maybe Daniel Hudson returns to Washington this offseason, maybe he doesn’t. One thing we do know, however, is that with a 3-2 slider down-and-in to Michael Brantley, he has a priceless place in team history that will no doubt be infinitely replayed in the district.