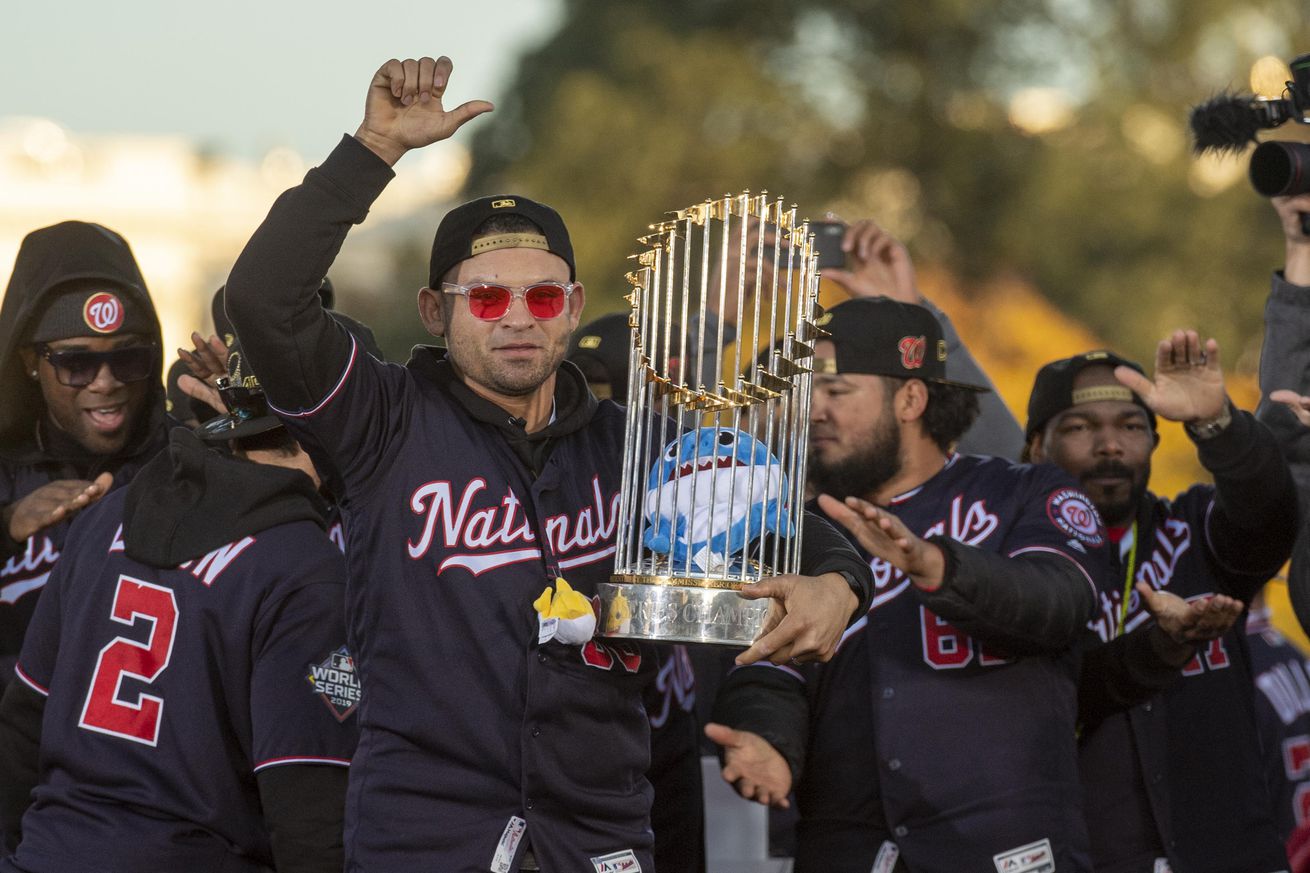 Dugout dancing, funny-colored sunglasses, and obviously, Baby Shark. Gerardo Parra leaves the Washington Nationals with one of the most fun and bizarre legacies…

As the years roll on and people look back at the box scores and stat lines of the 2019 World Series champion Nationals, many may glaze over Parra’s solid but forgettable .250/.300/.447 slash line with the team during the regular season.

But those fans who not only watched but lived in the fairytale season know that Parra was one of the most memorable players on that team, even if the stats will never show it.

After hitting below the Mendoza line for the San Francisco Giants, Parra joined the 14-22 Nationals on May 9th. It took him just two games to announce his presence to his new team.

His game-winning grand slam against the Los Angeles Dodgers didn’t just provide them a spark in that game, it took the immediate pressure to perform off of Parra. That then allowed the Venezuelan to be himself in the clubhouse right away.

The outfielder’s infectious personality spread like wildfire in the weeks that followed as the Nationals, counted out of the postseason picture by many, started having fun again.

First came the dugout dances on June 6th in the series opener against the San Diego Padres when Brian Dozier went yard for a two-run home run in the first inning off of Joey Lucchesi.

Then, with Parra in the midst of an 0-for-22 skid at the plate, Baby Shark made its debut on the Nationals Park PA system during the first half of June 19th’s doubleheader against the Philadelphia Phillies. The skid ended with a 2-for-4 day and the team’s anthem was born.

The fun wasn’t even close to over. As The Washington Post’s Isabelle Khurshudyan reported, Parra and Fernando Rodney stumbled upon a free sunglasses giveaway outside of Comerica Park in Detroit on June 30th. They wore them, the Nats won, and another bit was added to the ever-growing collection.

Next came the shark signs after base hits. A Baby Shark for a single, a Mommy Shark for a double, and a Daddy Shark for a triple. The Kansas City Royals didn’t know what hit them as the signs were used for the first time during an early-July series.

All of a sudden, the Nationals were winning again, they were having fun, the fans were buying into it, and they were thrust right back into the playoff race. You all know how the rest of this story goes by now.

Perhaps the best part about all of the gimmicks the team started using was that they were all organic. None of them were forced by anyone, they just came from Parra being Parra.

Though he didn’t do it single-handedly — give plenty of credit to manager Dave Martinez on this front — the outfielder helped turn an underperforming bunch of individuals into a family.

They were a family that genuinely enjoyed being in each other’s company. Who knows, maybe they’ll get together next week, share some turkey, and watching some football.

If they do, Parra will probably be one insisting to play party games or starting some karaoke.

The combination of that energy, as well as his fast start, quickly endeared him to the Nationals faithful, making him an instant fan favorite. That was a huge reason why Baby Shark grew into the phenomenon that the team and fans rallied around.

Baby Shark now has its place in franchise history as well as D.C. sports and baseball lore. A permanent reminder of the impact that Parra had on this year’s incarnation of the Nationals.

Never discard your shark costumes or real-time t-shirts. Let it remind you of 2019’s special run.

Unfortunately, all good things must come to an end and reality hits. Though there was certainly a case for bringing back one of the main off-the-field catalysts of the World Series run, perhaps Parra departing for the NPB is in the best interest of all parties.

Parra Shark gets a healthy pay raise up to $2 million in 2020 with $500k in bonuses and a possible $3 million vesting option. He should also get at the very least semi-regular playing time with Yomiuri, which definitely wouldn’t have happened in Washington.

His theme song is also bound to be a big hit with the Japanese crowd and could be yet another marketing goldmine that would endear him to a new set of fans.

So what about the set of fans that he’s leaving behind? Well, it allows the Baby Shark bit to have a happy ending as Parra rides off into the sunset of the NPB.

Instead of the risk of potentially dragging it out next season to try and recapture some of the lightning in a bottle they had in 2019, it has a perfect ending, with a stuffed Baby Shark hanging out inside the commissioner’s trophy.

Sure, there’s a chance that the Nats will miss his energy and leadership in the clubhouse. But if his bat regresses to what it was in San Francisco, it could easily grow wearisome.

But now we can say for sure that whenever fans think of Parra and Baby Shark, people will only have good memories of how it carried the Nationals to a miracle World Series title. That’s much better than risking the last memory of it being of a dragged out shtick in 2020.

Even though Parra will now depart for Japan, he could still come back to Nats Park next year.

While he will be busy playing on the day the Nationals raise the championship banner, the Yomiuri Giants will have a mid-season break for the Olympics between July 19th and August 13th.

It would be a perfect time to fly him back, present him with a ring, and give him a hero’s welcome.

No, he won’t have his number retired by the Nationals. Nor will he have a statue outside the stadium or his name in the Ring of Honor. However, Gerardo Parra will always be remembered fondly on the streets of D.C. for his invaluable contributions last season.

A toast to you, Parra Shark. May you never have to pay for a beer in the nation’s capital again.