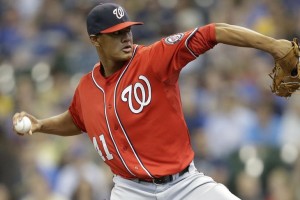 Ross is one of the tougher options crunch players the Nats have to decide upon this off-season.
Photo Getty Images via federalbaseball.com

We’ve alluded to this point in multiple comments under past comments, but its time to put pencil to paper.

Right now (ahead of any FA signings), the Nats 40-man roster sits at 31 players, with Ben Braymer having been added to avoid Rule-5 exposure yesterday … and one third of those players are out of options for next season.  A number of those players also seem to have little chance of actually making an active roster of a major league team, which means that they could be early off-season outright fodder if the team wants to try to slip them through waivers and outright them back into the system.

Lets take a quick run through each of the categories of Nats 40-man players and option status.

Category 1:  Vets who can refuse demotion (5 or more years of service) – 6 current players

Interestingly, the Nats roster last  year had no less than 16 such players; Veterans with 5+ years of service who could refuse demotion/make any available options immaterial.  Indeed, it was a veteran team.  Now 10 of those guys are FAs or out of the organization.

Not much to see here; all 5 of these guys are important parts of next  year’s team.  As noted, the early call up of Trea Turner eventually came back to bite the team, and probably costs them in the range of $10-$12M in payroll over the course of his four arbitration periods.  An expensive mistake.

I suppose one could make the argument that Carter Kieboom should be in the Category 2; right now we don’t really have a 2B or a 3B on the roster and he could play either.  But for now, i’m going on first impressions … and he did not make a good one early in the season.

Category 4: Options almost guaranteed to be used in 2018 – 7 current players

I’m guessing that if any of these six players start on the active roster next opening day, then we’ve had a huge injury spike in Spring Training.  Is Austen Williams healthy?  Was Aaron Barrett‘s call-up more than just a feel-good story?  We’ll see.  Nonetheless, it seems like all 6 of these guys are in AAA next year to start.

Note: I wrote this prior to the rule-5 additions Ben Braymer.  So technically this section is 7 current players, not 6.  But I think its safe to say that our new rule5 additions are guaranteed to both start the year in the minors in 2020.

Which leaves us with…

Category 5:  No Options Available – 10 current players of the 30 on the active roster.

So, this is kind of the point of this article.  Which of these 10 players are going to stick, which are players the team has to make some tough decisions on?  Lets go player by player in the order they are in this table (which is sorted by Service time):

Summary of what I think eventually happens to all 10 guys in one (or two) words:

I mean no offense to any of these players of course; its just that options crunches force teams into tough decisions.  But I see half these guys getting shed at some point.