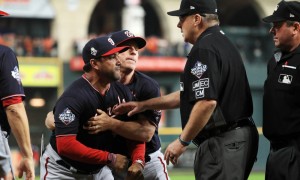 After getting brutalized in a home sweep that cost the fan base a lot of momentum and positive thoughts, who came to our rescue in one of the best games I’ve ever watched?

In what might now be the seminal performance of his career, Strasburg pitches into the 9th against one of the most stacked lineups ever put together (and that’s not hyperbole; by team wRC this is the best offense since the famed 1927 Yankees), recovering from two early runs to put down the Astros time and again, including an amazing streak against their top 6 hitters in the 7th and 8th to help keep the game out of reach while the offense came around and finally broke through after three straight games of ineptitude.

We’ll have a crowd-sourcing discussion after the season ends on where to possibly “rank” all the games we’ve now lived through this post season.  For 15 years we’ve clung to regular season games and non-series winning games as our “top ever games,” but now we have a slew of 2019 post-season performances to choose from and it’ll take some thought.  But I’ll tell you how: last night’s game is going to be up there.

As for tonight?  The salient fact I keep pointing out to doubting friends: the Nats are now 9-0 this post-season when Strasburg or Max Scherzer starts.  9-0.  And Guess who goes for the Nats tonight?  Now, it doesn’t seem like it’ll be the same Scherzer … not sure why he was in the bullpen throwing last night if he couldn’t move his arm two days ago, but perhaps he was just trying to work off stress.  Nonetheless, i’ll be shocked if he goes 5 tonight.  But we’ve got a huge advantage thanks to Strasburg’s start; our bullpen threw a collective 11 pitches last night.  Daniel Hudson is fresh, as is Tanner Rainey and Patrick Corbin (god help me if he gets in for more than a token appearance tonight), and Sean Doolittle was barely taxed.  meanwhile Houston had to put innings on half their pen, including most of the guys they’d bring in to spell tonight’s starter Zack Greinke if he runs into trouble.

I thought the Nats could win this in seven.  I certainly did not think the first six games would be won by road teams.  But here we are anyway.  Can’t wait to watch tonight!

Obligatory opinions on “the Turner play”

You can make a simple argument that, because the ball hit Turner and he wasn’t in the runner’s box, that he is out.  By the letter of the law (rule 5.09(a)(11)) that’s the case.  Fair enough.  But its still a judgement call.  Just because you aren’t in that box, doens’t mean  you’re automatically out.

Anthony Rendon‘s homer right afterwards was a big middle finger to karma.  And just like that, the Nats had their mojo back.