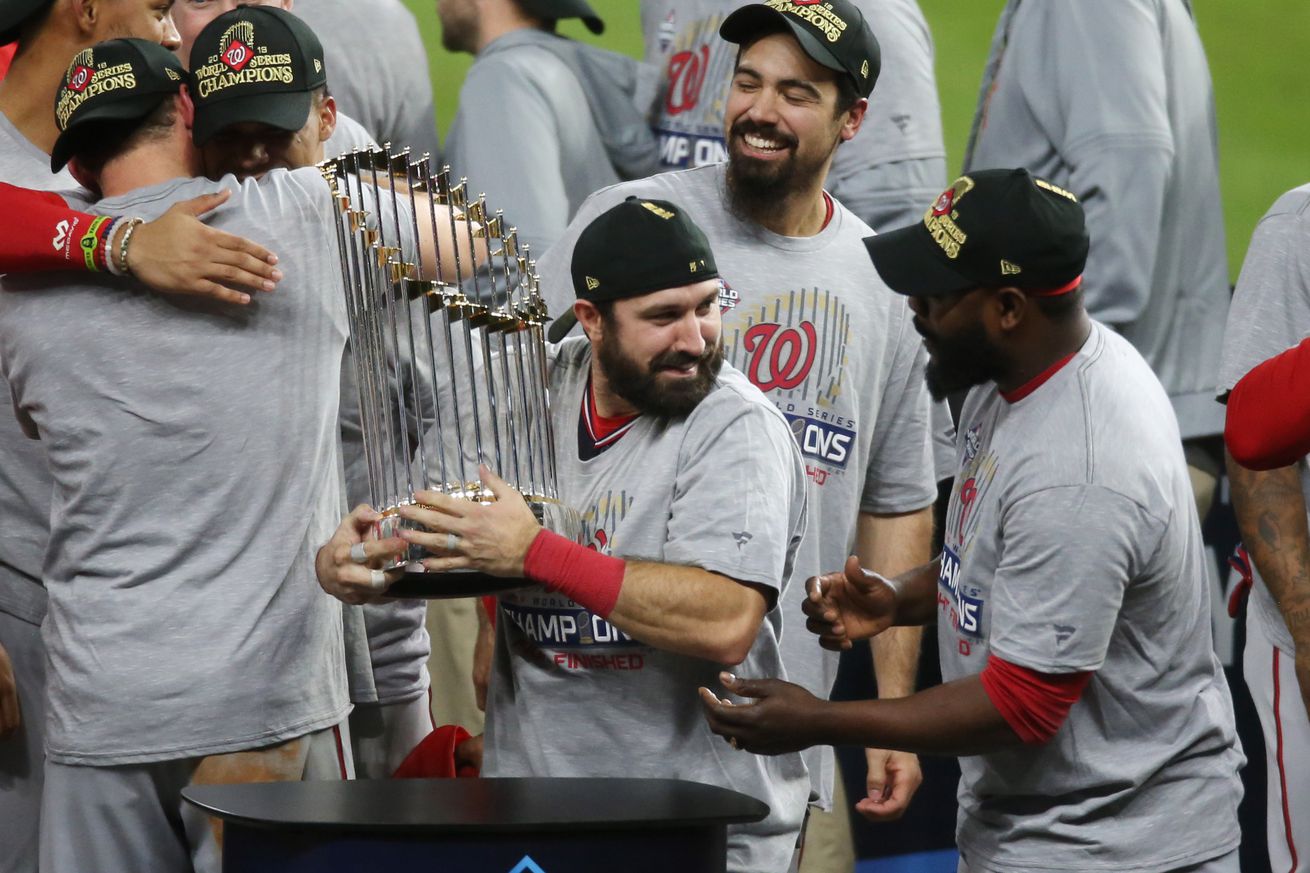 The Washington Nationals’ trade for Adam Eaton came under plenty of scrutiny early in the year, but does the World victory change perspective on the deal…

The Winter Meetings are looming. The World Series champion Washington Nationals could end up being busy in San Diego with plenty still left to tick off on their offseason checklist.

The Nats have generally been active at this time, making trades during four of the last five meetings.

One of those trades allowed them to acquire one of the integral parts of their October run, Adam Eaton, in exchange for a trio of promising pitching prospects.

As the Nationals slumped early on, the trade came under a lot of scrutiny.

Though Eaton was hardly lighting it up with an OPS of just .696 on May 21st, the main reason that the deal was under the microscope was the success of a player that went the other direction.

One season after posting the highest qualified ERA among starters, Lucas Giolito was performing like a budding ace to start the 2019 season.

The right-hander had a 3.15 ERA in 17 first-half starts, with an impressive 10.8 K/9 and 3.42 BB/9 to boot. His performances netted him a well-earned All-Star nod for the American League as he finally seemed to be living up to the potential he flashed in the Nats’ system.

In late-May, he would’ve slotted into the Nationals’ rotation perfectly. Aníbal Sánchez had an ugly 5.10 ERA before going in the Injured List, while Jeremy Hellickson, Kyle McGowin, and Erick Fedde struggled to find consistency in the fifth starter’s spot.

What happened after that? Well, first, the rotation found some consistency the rest of the way.

Sánchez pitched just like he did in 2018. Fedde along with Joe Ross and Austin Voth were solid when called upon in the fifth spot and filling the gap left by the injured Max Scherzer.

Eaton also picked his performances up later in the season.

After May 21st, he posted an improved .285/.380/.460 slash line, seemingly rediscovering his power stroke as the season went on.

Giolito was still effective the rest of the season for the White Sox, posting a 3.76 ERA in the second half of the season, giving him a 3.41 figure for the year as a whole. He even finished sixth in the AL Cy Young voting as a reward for his overall performances.

The other current major leaguer involved in the deal, Reynaldo López, went through some lumps in 2019. His 5.38 ERA looks ugly as he works through the kinks at the highest level, but he could still develop into a solid mid-to-late rotation starter moving forward.

So in terms of player performance, there was some change in the value on both sides of the trade. But there’s an argument that the biggest factor in this evaluation occurred in October.

It’s happened before numerous times where winning the World Series influences how the deal is perceived by fans, the media, and by others in and around the industry.

As an example, let’s look at when the Chicago Cubs acquired Aroldis Chapman from the New York Yankees for Gleyber Torres, Billy McKinney, Adam Warren, and Rashad Crawford.

Yes, the Cubs gave up a lot of value — primarily in Torres who was one of the best prospects in baseball at the time — for essentially half a season of a reliever, even for a dominant one.

But you know what is more valuable than any prospect package? A Commissioner’s Trophy.

If you asked the Cubs’ front office, knowing how 2016 ended with Chapman and how Torres has panned out since, if they would do the trade again, they would do it all again 100 out of 100 times.

Who knows, maybe the Cubs could’ve claimed their first World Series in over 100 years without Chapman. Maybe they fill their need in relief another way and are able to somehow piece together the late innings. Extremely unlikely, but there is a slim chance nonetheless.

However, what we do know now is that they did win it all with Chapman in the bullpen. The front office and Cubs fans wouldn’t gamble on another outcome, even if it means now having Torres.

A similar principle can now apply to the Nats and Adam Eaton seeing as, well, you know, the Nationals won the World Series, in case you missed it or needed another reminder.

Though Eaton wasn’t the biggest factor in the miraculous run to claiming the first World Series title in franchise history, he still found a way to make contributions in big moments.

There’s no way to know for sure what the Nats would’ve done had they not acquired Eaton.

Maybe they decide to cough up the cash for Bryce Harper, meaning they would then choose to not sign Patrick Corbin. Or maybe they pull the trigger on the Andrew McCutchen trade that was rumored around the same time, who would’ve been a free agent after 2018.

There’s also the factor that perhaps Giolito needed the long leash in the big league rotation, that the noncompetitive White Sox could give him and the Nationals may not have been able to, in order to develop into the potential ace that he now seems to be.

Though the odds of still winning it all would be slightly better for the Nats without Eaton than the Cubs without Chapman, given that an above-average right fielder is probably more easily replaced than a top-tier closer on the stat sheet, the same logic applies.

It’s all hypothetical trying to imagine the parallel universe without Eaton as a member of the Nats. All we know is that, with Eaton, they were able to win the World Series. That now, in some capacity, has to affect how the trade is now viewed looking back on it.

Yes, the Nationals probably ended up overpaying player-wise for Eaton’s services, you won’t find many who will dispute that.

But if the Nats had a chance to pull the trigger again, knowing how it all turns out, it would be an emphatic yes.

Not every move for every player that the Nationals made on their way to winning the World Series is now considered a win. However, in this case, the title now likely makes the Eaton trade a resounding success.