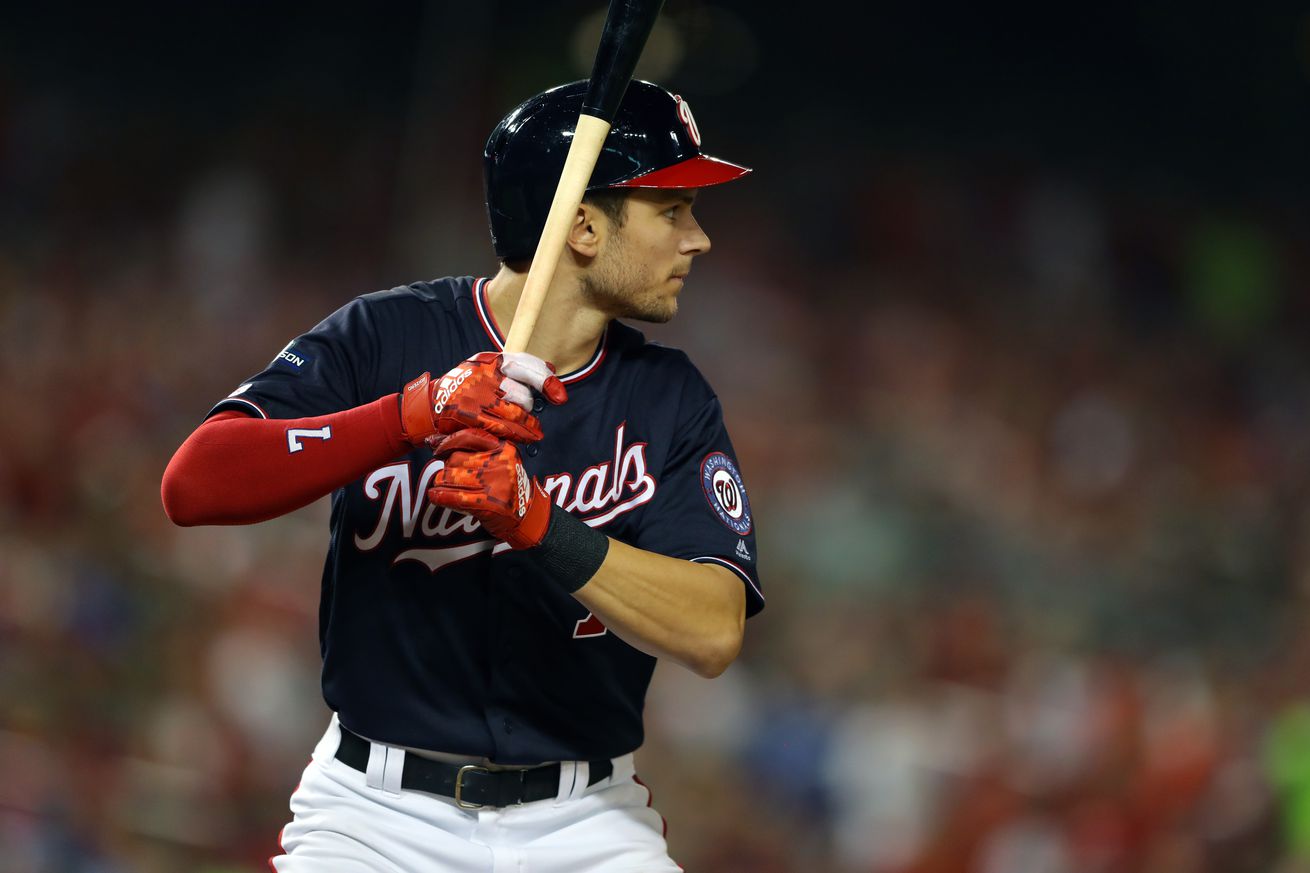 Baseball is now just six days away. That’s when the Washington Nationals’ pitchers and catchers officially report to Spring Training, with the rest of the team joining five days later.

However, for the first time since 2012, there won’t be a player by the name of Anthony Rendon joining them this spring. The hole that he leaves in the lineup of the defending World Series champs represents a huge obstacle on the road back to the postseason.

Unless GM Mike Rizzo has a stunning trade up his sleeve, manager Dave Martinez will be trying to fill that void with the players that are already on the roster. That won’t be an easy task.

“The importance of having Anthony Rendon in our lineup, he was the guy that made our lineup go,” Martinez said at the Winter Meetings. “He was the guy that was consistent all year long and has been his whole career. So it’s going to be a void that we need to figure out.”

With all the signings the Nationals have made this offseason, they aren’t short of options when deciding how to align the top of their lineup without their 2019 MVP finalist.

Will Juan Soto be bumped up to third in the order with Howie Kendrick or Ryan Zimmerman hitting fourth? Will new signing Starlin Castro immediately be in the top four? Or could Victor Robles take the big step up into the top half of the order?

Well, based on some of the early signs Martinez has given, he might go an unconventional route by dropping the speedy Trea Turner from the very top of the order to third.

“Honestly, I might try Trea there and see how that works out,” Martinez said on MLB Network Radio last month. “Like I said, I like the fact that we’ve got a bunch of different options and guys who can put the ball in play throughout our lineup.”

The logic behind hitting Turner third seems to come from his pure hitting profile.

There’s also reason to believe he could improve on that line while hitting ahead of Juan Soto.

Theoretically, with Soto hitting behind him, Turner would see more pitches in the strike zone with opposing pitchers more likely to attack him rather than work around him to face Soto.

And when they do pitch to him Turner is well equipped to capitalize on pitches in the zone.

As a pure hitter, the shortstop could potentially thrive hitting third in the order, as going into the season, he appears to be the team’s second-best hitter.

However, with Turner, you can’t simply look at him as a pure hitter. Doing so would be completely disregarding his best quality in his game-breaking speed on the basepaths.

As one of the fastest players in the league, it wouldn’t shock anyone if Turner was able to steal at least 60 bases in a fully healthy season. That edge might be even more crucial on a team that’s lacking some of the firepower on offense that it’s had in recent seasons.

If he hit directly ahead of Soto, it would be tough to imagine him attempting all that many stolen bases when on-base. If he did, it would just give opposing teams an easy chance to pitch around the phenom with a base open, letting someone else beat them instead.

And that’s the theme behind the argument against hitting Turner in the heart of the order. It has the potential to negatively impact other players who are then thrust into bigger roles than they have filled so far, or are square pegs in round holes fitting around him.

For example, if Turner hit third, the Nats would be putting a lot of pressure on someone like Victor Robles who could then end up hitting first or second in the order.

Yes, he showed promise in 2019 and the top third of the order will be his long-term home. However, it would be a bold move to throw him in at the deep end in his sophomore season.

Then finally there’s the comfort factor. Turner has been a leadoff hitter for the vast majority of his major league career and baseball career in general. It’s where he clearly wants to hit…

“I’ve always liked leading off because I just feel like I can contribute the most there,” Turner told Todd Dybas on the Nationals Talk podcast. “It’s hard for guys to pitch around me so I get better pitches to hit and then I can get on base, I can do a lot of different things.

“Obviously, you know, I want to work on the total package but if I have to be, I guess, the three-hole hitter then I don’t know. But we’ve got a lot of good hitters, I don’t know if that’s necessarily going to happen, but we’ll see in Spring Training and we’ll work on it.”

In an ideal world, the top of the order is probably where the Nationals would want Turner to hit anyway. Despite being one finger short last year, that’s where he hit, and hit well. That’s where he naturally belongs, if possible.

The problem is, with the lack of impact bats, he may need to slot in ahead of Soto to give the Nats a potent 3-4 combo while also having something resembling protection behind them. Or at least that may be the case until they figure out what they have in top prospect Carter Kieboom or whether Castro’s late-season surge in 2019 was legit.

Lineup construction seems to be the biggest challenge for Martinez in his third year at the helm. As Spring Training rolls along, we might see which way he’s leaning, with the position of Turner likely the key to how the rest of the lineup falls into place.