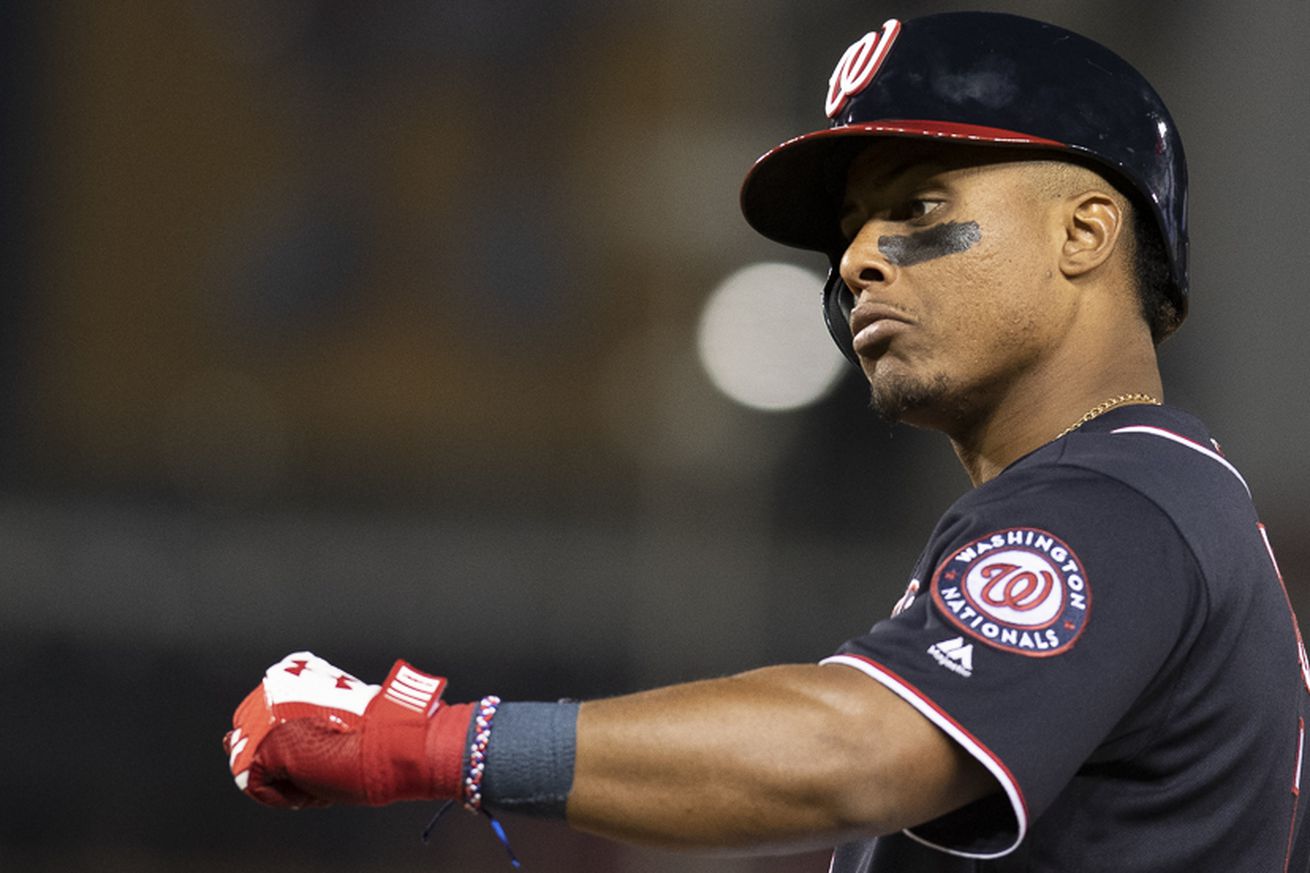 Ahead of tonight’s deadline to tender contracts to arbitration-eligible players, the Nationals reportedly signed Wilmer Difo to a 1-year/$1M deal.

According to multiple reports on Sunday night, the Washington Nationals and 27-year-old infielder Wilmer Difo agreed on a 1-year/$1M deal for 2020, avoiding arbitration.

Difo was arbitration-eligible for the first time this winter, accruing three years service time in his fifth season in the majors while playing on a 1-year/$581,100 deal.

Difo played 124 games in the majors in 2017, and spent the entire 2018 campaign with the big league club, but he was optioned to Triple-A Fresno this past May, after putting up a .231/.301/.298 line with two doubles and two home runs in 39 games (33 starts) and 134 plate appearances for the Nationals at the beginning of the season.

Difo got the majority of the starts at short after Trea Turner broke his right index finger on a bunt attempt four games in, but was sent down to get regular at bats once Turner returned.

“Difo needs to play, I mean, he really does,” manager Davey Martinez explained after the Nationals announced the roster decision.

“When we need him again — it’s an ability for him to continue to play — and then when we need him he’s had the at bats, and he comes up and he’s right back where he left off. For him just to sit there, everybody — I don’t think people realize how young Difo still is — we just want him to play and keep playing and like I said, when we need him again, he’s been playing, it’s not like he’s sitting there and all of a sudden you plop him back in. So that was it. He’ll be back here at some point, I know, but we just want him to go out and play every day.”

What does this mean? The Nationals still see Wilmer Difo as a potential utility infielder for next season. But this doesn’t guarantee him a roster spot for 2020. Difo is out of minor league options, according to Roster Resource, which further complicates his situation. https://t.co/HWArDhorYS

Difo put up a .300/.369/.438 line, 14 doubles, three triples, and four home runs in 61 games and 261 PAs for the Grizzlies. He wasn’t called back up to the majors until September, and didn’t make the postseason roster in any round on the way to the Nationals’ win in the World Series.

With players who saw time at second in 2019 like Brian Dozier, Asdrúbal Cabrera, and Howie Kendrick all free agents, and top infield Carter Kieboom next in line, but still unproven, their deal with Difo gives the Nats a backup infielder and utility option going into Spring Training, who is, however, out of options.

MASN’s Mark Zuckerman, among others, noted after the deal for 2020 was announced last night that signings of additional infield options this winter, and Difo’s performance early in Spring Training, could determine a great deal about his future with the organization:

“One-year deals for players who have yet to reach free agency typically are not guaranteed.

If a team releases a player who falls under this category within the first 16 days of Spring Training, he receives only one-sixth of his salary. Reliever Sammy Solís suffered that fate this year after agreeing to a non-guaranteed, $850,000 contract over the winter.”

Difo was projected to get $1.2M in arbitration by MLBTraderumors.com, and was one of eight arbitration-eligible Nationals this winter, along with Hunter Strickland, Javy Guerra, Michael A. Taylor, Roenis Elías, Joe Ross, Trea Turner, and Koda Glover.

MLB teams have until 8:00 PM tonight to tender contracts to arbitration-eligible players or, alternately, non-tender them, at which point they will become free agents.