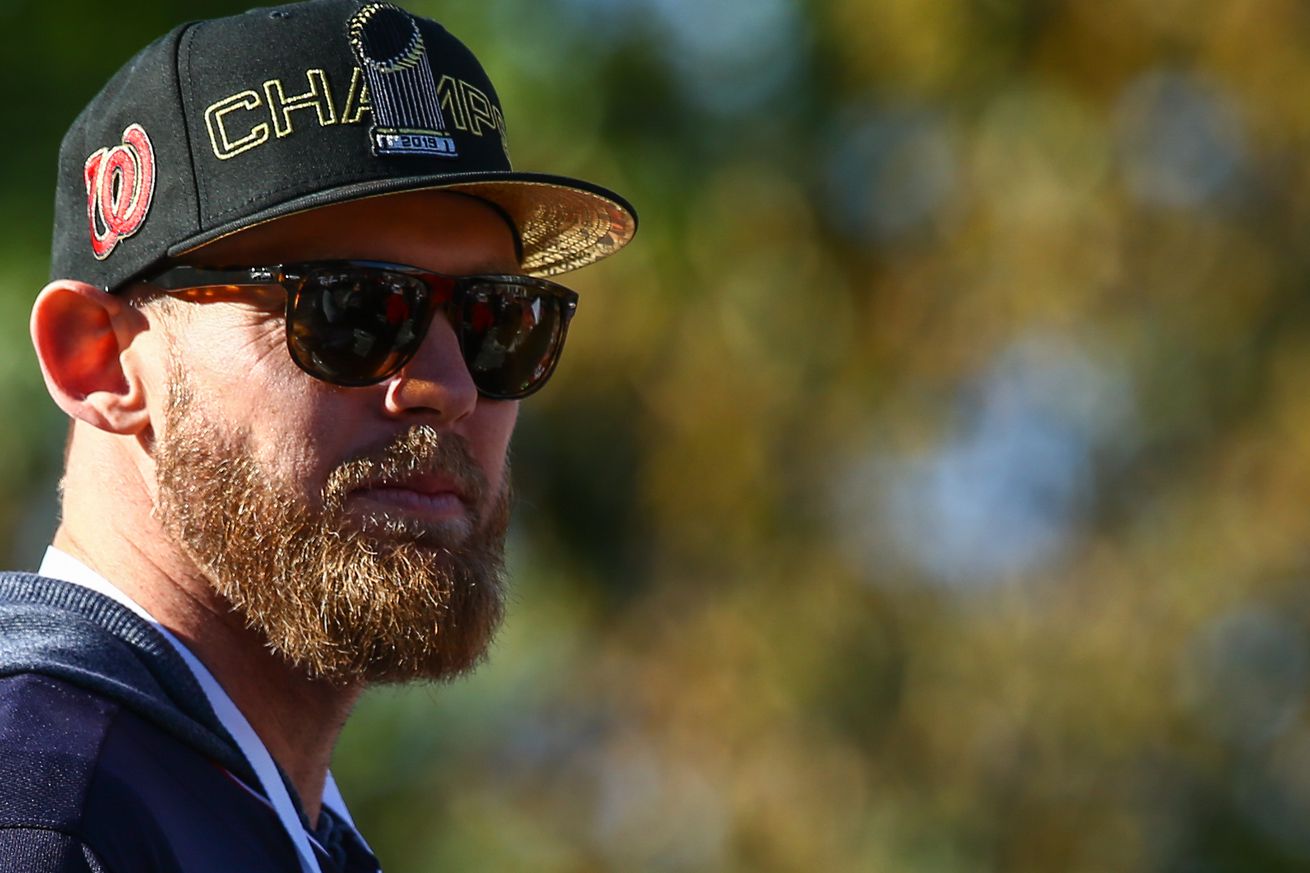 There has been a bit of chatter about Stephen Strasburg’s future in the last week. Catch up on the latest rumblings…

There were two interesting notes on Stephen Strasburg this week, for those of you who are wondering where the 31-year-old World Series MVP is going to end up signing, after opting out of the final four years and $100M of the 7-year/$175M extension he signed in 2016, and for those of you who are just desperate for anything Washington Nationals-related in what’s been a relatively slow start to the Hot Stove season in D.C.

“Strasburg is a guy, I think he wants to go back to Washington, Washington wants him back, I wouldn’t be surprised if he’s done before the Winter Meetings,” Feinsand said.

This, of course, is seemingly Feinsand’s opinion, he doesn’t cite any source for his belief in things getting done quickly, but it does come in the weeks after Strasburg opted out, MLB Network analyst Jon Heyman reported that Mike Rizzo and Co. in the Nationals’ front office are, “[endeavoring] to get quick resolutions with Stephen Strasburg and Anthony Rendon so there’s time to move to contingency plans, if necessary,” and Rizzo told reporters at the GM Meetings, as quoted by MLB.com’s Jamal Collier, that they, obviously have a head start on other teams interested in the free agents.

“We’re going to try and negotiate a deal that makes sense for us and for them,” Rizzo said.

“With the added bonus that it takes away a big part of [the process of] acquiring free agents — which is, you’d better make sure you know the free agent when you acquire them. We already have that covered. And that gives us a head start on those two particular free agents.”

“We know each other pretty well,” Rizzo added, and, “they know our feelings toward them personally, professionally, and vice versa.”

Knowing Strasburg well, given his injury history, could play a big role in what the Nationals and other teams are willing to give the right-hander, who underwent Tommy John surgery back in 2010, and the starter’s agent talked to The Athletic’s Ken Rosenthal this week about why any teams with concerns about investing (more than four years likely) in the 2009 No. 1 overall pick is less of a risk than you might think.

Strasburg is coming off a 2019 campaign in which he threw a career-high 245 1⁄3 innings in the regular season and postseason combined, and he is nine years removed from Tommy John surgery now, Rosenthal noted, and, “… the odds of a pitcher requiring a second TJ are not particularly high, according to a study published by the Journal of Shoulder and Elbow Surgery in 2018.”

The average time for a pitcher who needs a second Tommy John surgery is four years after the first procedure, according to their data, and Strasburg is now well beyond that window.

The fact that his fastball velocity isn’t quite what it used to be (94 MPH+ AVG in 2019 on his four-seamer and sinker) and he’s throwing fastballs significantly less than he used to (a career-low 48.3% of the time in 2019), while focusing more on his offspeed offerings this season (30.6% curveballs and 20.7% changeups, both career highs, percentage-wise).

As Rosenthal writes, Strasburg has gone nine years on his new UCL while lowering, “his risk factors along the way.”

“Those risk factors, according to several studies, include peak velocity over 95.7 mph, mean (average) velocity over 91 mph and a fastball usage of more than 47 percent.”

With career lows in peak velocity (Strasburg maxed out at 96.9 on his four-seam and sinker this season), and average velocity, the right-hander is trending in the right direction, and his decreased fastball usage is a positive as well.

And the need for a second procedure among “established major league pitchers” or “elite” starting pitchers, as Boras told Rosenthal, is less than 2%.

“The data is clear: A TJ revision for elite starters (175 or more major-league starts) is a de minimis issue,” Boras said.

“You have a much greater chance of getting hit in the head with a line drive.”