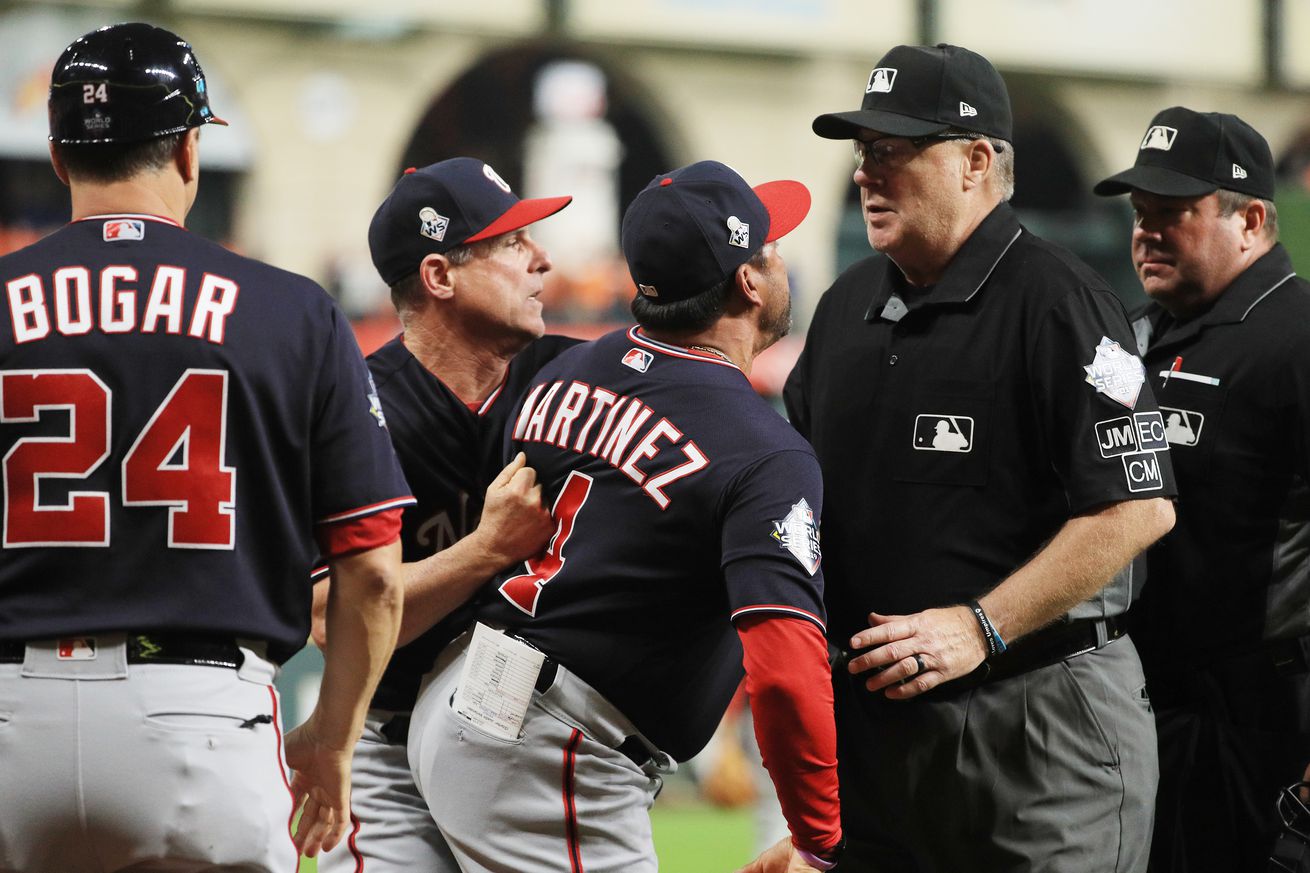 In an attempt to avoid having anyone getting “stagnant” at their positions, Nationals’ skipper Davey Martinez decided to shake things up on his coaching staff.

Washington’s Nationals didn’t want to shake much up with the coaching staff coming off of a World Series win, though they did have to hire a replacement for Assistant Hitting Coach Joe Dillon, who was hired as the Philadelphia Phillies’ Hitting Coach this winter.

In order to keep everyone fresh, however, Manager Davey Martinez decided to shift some of his coaches to different positions. Paul Menhart is remaining the Pitching Coach, and Henry Blanco’s staying on as the Bullpen Coach.

Kevin Long is back as the Hitting Coach and Pat Roessler is the new Assistant Hitting Coach, but the rest of the staff are moving to new roles.

Third Base Coach Bob Henley is moving over to first base, and Tim Bogar, who was the First Base coach for Martinez in each of the last two seasons, is now the Bench Coach.

Bogar is taking over the role Chip Hale served in as Martinez’s Bench Coach in for each of the last two seasons, while Hale, who has previously managed in the majors, and coached at third base in Oakland, New York, and Arizona, is going back out there in 2020.

“It was about not getting stagnant and trying to give them something else,” Martinez said in explaining the moves, as quoted by Washington Post writer Jesse Doughterty. It will also, he said, help his coaches out when and if they interview for other jobs in the future.

“Once you show all these different teams what you can do, people like that. They really do.”

Bogar interviewed for the New York Mets’ managerial opening this winter, and, obviously, he didn’t get the job, but once Martinez knew he’d be back, he thought a change might help.

“I told him: ‘You deserve a chance to manage,’” Martinez said, as quoted by MASN’s Mark Zuckerman.

“He’s really good. And when he didn’t get the (Mets’) job, I did tell him, ‘I’m glad you’re back.’ He didn’t know what we were going to do. But when I called him and told him we’re going to move him to bench coach … he said: ‘That’s a great idea. I would’ve never thought of that.’”

“I think every year having something different to do is a new challenge,” Bogar said when he spoke to reporters at WinterFest earlier this month.

“But the amazing thing about our group of coaches, I think, is that it’s just a really good group of guys with a lot of baseball knowledge. I don’t think there’s ever been any lines drawn about what we can and can’t coach, so even though there are some role changes and things like that, I don’t think a lot of things are actually going to change in the fact of how Davey reaches his final decisions on things.

“Obviously guys are moving base paths and stuff like that, but standing in the dugout next to Davey, I’ll be there all the time instead of just on defense. But I’m looking forward to it. This is going to be — I think, my fifth year doing it, as a bench coach, so excited, excited to be close to Davey, and looking forward to our next challenge.”

“It was interesting,” Hale said of the decision to shake things up. “I was surprised. Had not heard anything about it until I got home, so I was a little bit taken aback. It’s just — you’re blessed to be a coach in the major leagues, it’s not easy, there’s a lot of guys that are vying for your positions, so I’ve coached a lot of third in my day, whether it’s managing through the minor leagues, and coaching third in Arizona and Oakland and New York, so I enjoy it. I enjoy being on the field and you feel a little bit more like you’re still playing, so we’ll just do the best we can to help the guys run the bases and score a lot of runs.”

How was he informed of the decision, and what did Martinez tell him?

“You wanted to kind of keep it fresh I think is what their terminology was, and move guys around and challenge us a little bit, so we’ll do it.”

As for his own style at third base? Hale served as a third base coach with the D-Backs, A’s, and Mets, as he noted, so he’s comfortable with the new role with the Nationals.

“Your style is what your team allows you to be,” he said, “… so we’re going to try to get it in Spring Training to the point where they are giving us — me, a chance to send them. I mean, I’m basically just a stop sign if I don’t think they can make it or if they look like they are slowing down, so we do have some veteran players in our group, so we have to make sure we keep them healthy for the season, and I always think of that in mind, but as for a style, be aggressive as we can.”

As for Henley, whose aggressive style at third base led fans to, at times, derisively call him “Bobby Sendley”, he is, of course, excited about the opportunities the move presents.

“Fired up, man,” Henley said of his own reaction to learning the news.

“I talked to Davey and you know what’s interesting? I’ve been doing third for six years now. Enjoy it. Love it. And at the same time I’ve been asked to do numerous things over the years. I’ve done the catching, and then Davey had asked me to do outfield, which was a learning curve right there, and then watching the boys run around last year, two Gold Glove guys with [Juan] Soto and [Victor] Robles getting nominated, and the job that [Adam] Eaton did out there and having such a successful outfield, very rewarding knowing that it was a new challenge. He had asked me to be vocal in the Spring and run camp, which I had run camp many times before but never where you were more of a vocal leader. He had asked me to kind of step up in that regard the last few years, which stretches you again, and it’s a new challenge, and this here I think for me, is another challenge. He’s asked me to coach first base, I’ve never coached first base, and all that goes with that, studying probably more film in regards to pitchers and their moves, making sure that we’re on the same page with the baserunners as far as how aggressive we want to be on the basepaths. Probably trying to keep Max [Scherzer] from stealing too many times during the course of the year, which, ‘Good luck with that, Bob.’ But looking forward to it, excited about it, it’s a new challenge, and World Series champs, I’m just glad to be a part of it.

“If Davey asked me to park cars, I’d ask him, ‘Which lot? A or B?’ I think he’s been brilliant in the course of the last few years, the decisions he’s made, bringing us together as a family and a group, and at the end of the day, I’m an assistant coach, and I’m asked to assist in whatever he wants me to do, and I’m up to the challenge and I’ll do it to the best of my ability for the sake of the team, and always have, always will, and continue to try to do the best I can for the sake of the boys.

“I think it’s just giving me a new role, something different, another challenge to do,” Henley continued.

“I mean, you’ve got Tim [Bogar] who’s on the bench now, which he’s done that, plus he’s been an interim-manager at one point. You have Chip who has managed, he’s coached third, I’m the only one that hasn’t done anything at first, I don’t think. I haven’t done that, or had that challenge yet, so I welcome it. And again, whatever role I’m asked to do, I embrace it and welcome it, especially if it’s something I’ve never had a chance to do before.

“It’s exciting … the unknown of that, but there’s the challenge that’s there, and I’m already starting to kind of look at some video and some film and talking to Tim Bogar and guys that have done it a little bit. And kind of go from there.

“I’ll probably have to stop myself from waving guys to second, you know, and third, so we’re probably going to be extremely aggressive going first-to-third, extremely aggressive trying to steal second base or get to second base out of the box, because I’m passionate about running the bases. I was never a fast human being, and I know over the years I’ve had Trea [Turner] and Vic and a lot of these guys can really run, so I think I’m faster than probably they are at times, but I enjoy it. I’m so privileged and honored to be a part of an organization this long and now to have won a World Series and have a manager that thinks enough of me to actually do things that challenge me, so I’m fired up about it.”