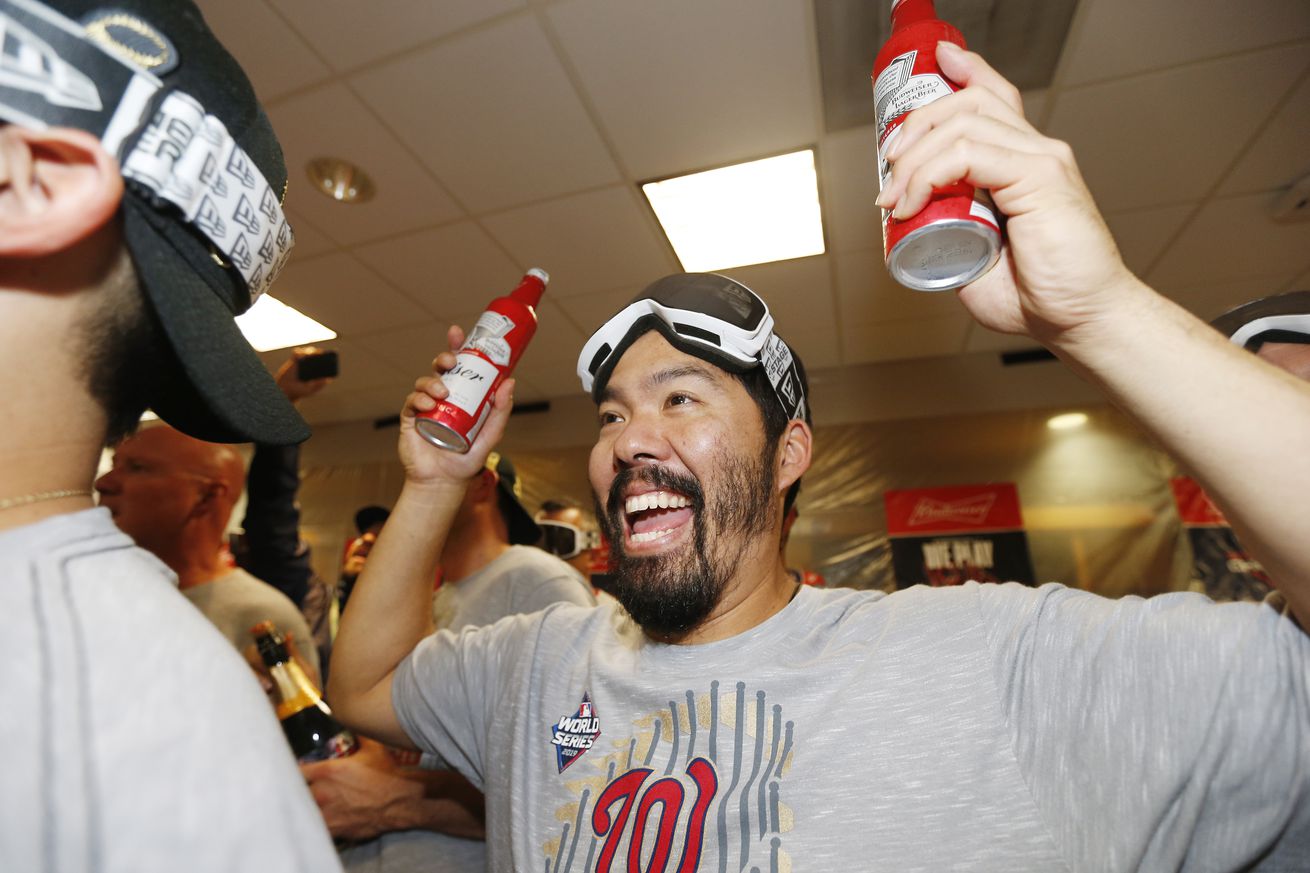 Kurt Suzuki and Yan Gomes started all but two of 162 games for the Nats in 2019. Where will the Nationals find a new partner for Suzuki?

Davey Martinez had nothing but good things to say about the work Kurt Suzuki did behind the plate during the first year of his 2-year/$10M deal in D.C. when the manager spoke with reporters about the 36-year-old catcher during the World Series.

“He has a game plan. He sticks to the game plan. He’s very adamant about what he wants to do to hitters and he communicates really well with our pitching staff.”

“Both him and Yan [Gomes have] done an unbelievable job with the pitching staff. And we knew that when we got these two guys what they can do.

“I’ve seen Suzuki from afar playing against him when he was in Atlanta, just handled that pitching staff. And Yan I’ve known for a lot of years, and what he does behind the plate.”

He suffered a hip injury late in the Nationals’ playoff run as well, but told reporters he was just happy to be playing deeper into October than he’d ever been before.

“I’ve waited 13 season for this moment to be able to play in the World Series,” Suzuki said.

“I kind of joked with a lot of the guys, Anthony [Rendon] in the training room, now I’ve got energy now, this is the last series of the season now, no matter what. We’re playing for it now. If you can’t get up for these games I think you’re in the wrong sport, you should retire or something, because this is it. You obviously see all the media and the coverage that you get for the World Series. It kind of pumps you up and especially waiting how long I did to get to play in a World Series game, to advance past the first round of the postseason it’s awesome.”

Gomes ended up starting Games 4-7 of the Fall Classic with Suzuki banged up, but once the season was over, and after they’d won the World Series, the Nationals decided not to pick up the club option that would have paid Gomes $9M in 2020, opting instead for the $1M buyout in the deal the veteran catcher signed with Cleveland in 2014 (6-year/$23M).

So where will Mike Rizzo and Co. in the Nationals’ front office turn now to bolster the depth behind the plate? Will they work out a new deal with Gomes that pays him less than $9M in 2019?

Will they stick with in-house options (like Raudy Read, Tres Barrera, Taylor Gushue) and risk having to lean on them if Suzuki (who turned 36 on October 4th) has any more injury issues?

Or will they find another front-line-ish backstop to share the duties with Suzuki?

“We could have went for the big free agent everyday catcher, or get a trade for a younger, more everyday type of player, and we felt that the best bang for our buck was to go after both of these guys, and we identified them early in the offseason and really focused in on these two guys specifically and went after them.”

Where will the Nationals turn to bolster their catching corps for the defense of their World Series crown?