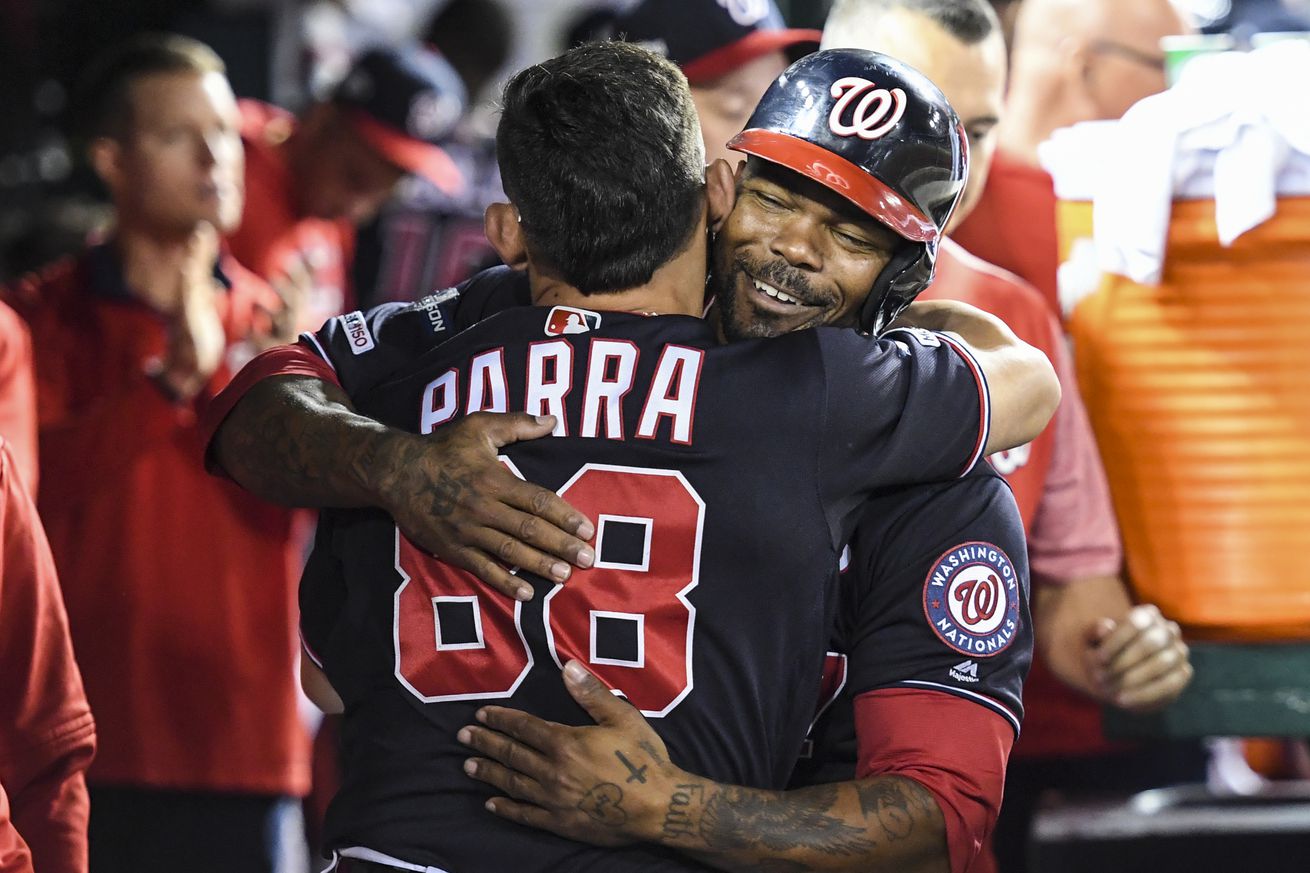 Catch up on the last 24 hours in Nationals news while we wait for the first big signing of the offseason, which is like totally coming any day now…

So long, Baby Shark, or Parra Shark, or whatever. The unlikeliest fan favorite since Michael Morse left for Japan yesterday. The Nationals added a young left-handed pitcher to the 40-Man roster. There are some rumors, including one which provides a possible trade to help the Nats build their bullpen for 2020, some local stories about some of Washington’s best, and more below. Go read your links…

Nats add lefty Braymer to big league roster – (MLB.com)
“The Nationals on Wednesday protected one of their nearly Major League-ready prospects from the Rule 5 Draft, selecting the contract of left-hander Ben Braymer from Triple-A Fresno.”

Lefty Ben Braymer is Nats’ lone addition to 40-man roster – (MASN)
“Braymer’s addition still leaves the Nationals with only 31 players on their 40-man roster. They have a host of veteran free agents who either must be re-signed or replaced this winter…”

Condra-Bogan adjusted to heavier workload in 2019 – (MASN)
“Condra-Bogan said he also throws a slider/curveball that is starting to gain some traction and effectiveness.”

Thanks for the memories, Gerardo Parra. Go make some more, Nationals – (WaPost)
“Parra’s impact on the Nats is going to be one of the most vivid memories of my baseball-covering life.”

Gerardo Parra signs with Japanese team, leaving MLB and Nationals – (WaPost)
“The veteran outfielder, a key piece of the Nationals’ championship run, signed with a Japanese professional team on Wednesday.”

Popular Parra signs with Japanese club – (MASN)
“Gerardo Parra, who surprisingly became a major contributor to the Nationals’ World Series title on and off the field, signed overnight with the Yomiuri Giants of the Japanese Central League…”

Ole Miss alum recounts road from gruesome injury to World Series – (Clarion Ledger)
“Barrett had to have 16 screws put in his arm. Few pitchers had ever come back this injury. For almost two years, Barrett didn’t even think about throwing a baseball.”

Make your donation today at https://t.co/Puc0AhB3qL.

Bye-bye, ‘Baby Shark’ — Nationals fans salute Gerardo Parra and his walk-up song – (ESPN)
“‘Baby Shark,’ the walk-up song that may have changed the course of the 2019 MLB season, is swimming off into the sunset — or more accurately, the Land of the Rising Sun. Free agent Gerardo Parra has signed to play in Japan.”

Betts to LA and 4 other trades that just might work – (MLB.com)
“That said, the Nationals would appear to be the ideal fit, as Washington must replace free agent Daniel Hudson, and it seems to be on an eternal quest for bullpen help.”

Could Stephen Strasburg sign before the Winter Meetings? https://t.co/LBaWk9wski

Gerrit Cole Will Be Worth $200 Million to His Next Team – (Sports Illustrated)
“The short answer to whether Scherzer’s contract, currently the second-largest for a pitcher in total cost, was worth it: Absolutely.”

MLB Rumors: Here’s Who’s In On Stephen Strasburg; When Pitcher Might Sign – (NESN.com)
“Getting Strasburg off the market might kick things into gear for the mid-tier free agents, though that’s not a guarantee. So, who is kicking the tires on Strasburg?”