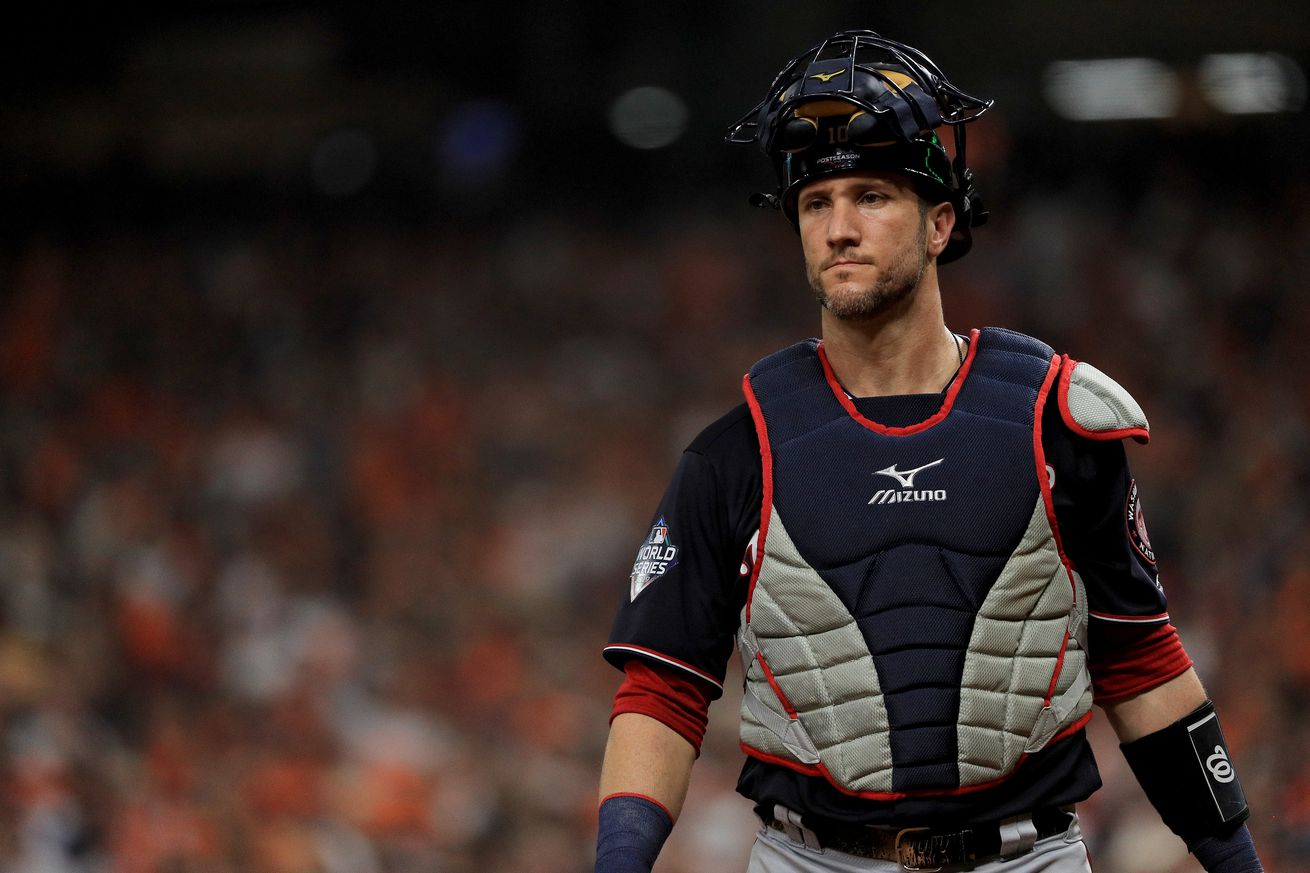 Kurt Suzuki and Yan Gomes will apparently be handling the Nationals’ staff again, now that Gomes has a new 2-year/$10M deal that will keep him in Washington. It’s the first big news of the winter!!!

Catcher Yan Gomes and the Washington Nationals are in agreement on a two-year, $10 million deal that will return the veteran to the reigning champions, sources tell ESPN. Gomes caught the final out of the World Series and will rejoin Kurt Suzuki as the Nationals’ catching tandem.

Source: Gomes, Nats agree on two-year, $10 million deal – (MASN)
“The deal isn’t official yet, but a source confirmed the two sides came to agreement Wednesday evening. ESPN.com was first to report the signing.”

Nationals bring back catcher Yan Gomes on a two-year deal – (WaPost)
“Their negotiations were also accelerated by a quick-moving catchers market.”

Q&A: Slowes on calling Nats’ World Series win – (MLB.com)
“MLB.com caught up with [Charlie] Slowes recently to talk about the Nationals, who won their first World Series title in October. There is still an afterglow for Slowes with the Nationals going all the way.”

A big question for Nationals: Build a bullpen now or later? – (WaPost)
“’It’s asset allocation. How much are you going to spend on the bullpen? As opposed to the other parts of your roster,’ Rizzo said in mid-November.”

What does it sound like when AtNationals calls you to vote our guys to the All-MLB Team?

Yan Gomes: Catcher returning to Washington Nationals – (Sports Illustrated)
“While the 32-year-old Gomes’ new deal is the Nationals’ first significant move since winning the World Series, the team still has plenty more to do this offseason.”

10 prospects who rebounded in 2019 – (MLB.com)
“In the second half, however, [Jakson] Reetz was arguably the Carolina League’s most productive hitter, batting .282 with 12 home runs over his final 50 games.”

1 reason for every fanbase to be thankful – (MLB.com)
“That World Series trophy is a reward for eight seasons of consistently excellent baseball. No fanbase has more to be thankful for right now.”

Quick thoughts on the Yan Gomes signing: Getting a reliable veteran partner for Kurt Suzuki at $5 mil/year is a steal. Gomes did struggle at the plate for most of the season, but came up big in September (six HRs, .850 OPS) when Suzuki was banged up.

Bowden: The 40 (mostly) baseball things I’m thankful for this year – (The Athletic)
“Nationals owner Ted Lerner finally being able to witness his team win a World Series at 94. Under his family’s ownership, his team is in great hands.”

Phillies Decade in Review: The best moment from every year – (The Good Phight)
“There’s just more month left in the 2010s, a decade that started off with the Philadelphia Phillies as perennial postseason participant and ended with them trying to make their way back there.”

Andrés Giménez Chats About 2019 Season & More – (New York Mets Youtube)
“Mets’ prospect Andrés Giménez chats about everything from his 2019 season to his time in the Arizona Fall League.”

Wei-Yin Chen released by Marlins – (MLB.com)
“Wei-Yin Chen is now officially a free agent. Chen, who was designated for assignment on Nov. 20, has cleared waivers. The Marlins released the 34-year-old left-hander on Wednesday.”