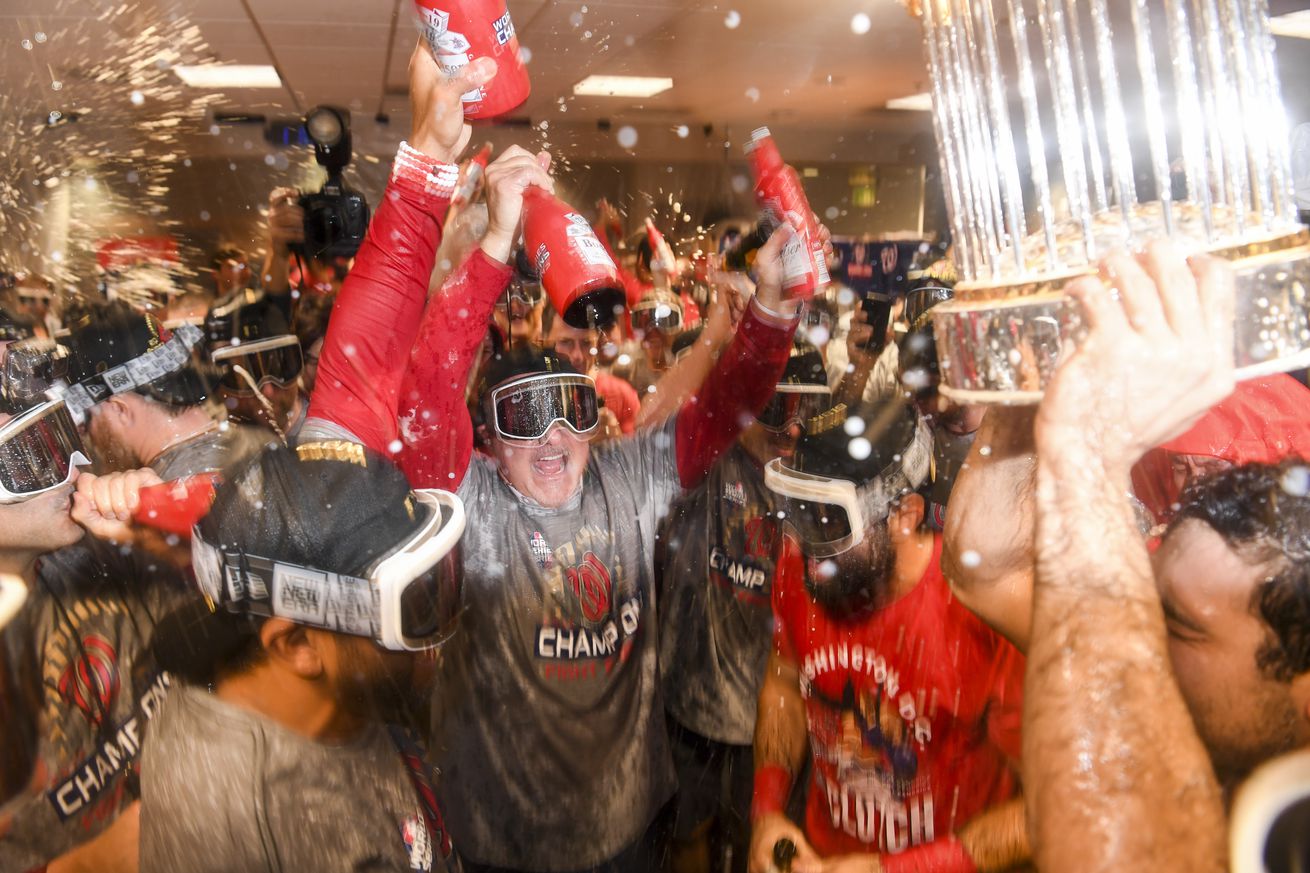 So, $382,358.18 is quite a bit of money, for the players, but more importantly, for the non-players who received one of the 61 full shares the Nationals handed out when they got an award for winning it all this season.

Winning the World Series is good for everybody who’s getting those shares, apparently.

Read all about how that was shared and check out all of the latest Nats news below. Go read your links…

A World Series means a windfall, and not just for the players on the field – (WaPost)
“An extra 382 grand and change won’t affect, say, Max Scherzer’s life much, but how that number is determined and the impact it can have is kind of fascinating.”

For those that caught the mistake in the first release, it has been corrected. The Astros are indeed in the AL, not the NL. https://t.co/OQuSyvVs9U pic.twitter.com/tiXRm9n47f

Nationals cash in with playoff shares – (NBC Sports Washington)
“Win the World Series, receive an extra $382,358.18. Such is the case for the Washington Nationals.”

After an erratic season, what does the future hold for Joe Ross? – (MASN)
“So where does Ross stand within the organization after all that? He certainly seemed to re-establish himself as a candidate to fill out the back end of the rotation.”

For Nationals fans, an autumn to remember forever — and be thankful for – (WaPost)
“In the holiday mood, I gave myself a present this week: I watched the replay of Howie Kendrick’s home run off the right-field foul pole in Game 7 of the World Series.”

Will Juan Soto and Victor Robles be part of the early extension trend? – (NBC Sports Washington)
“In January, the idea of a Soto extension was casually mentioned to Washington general manager Mike Rizzo. He said then the concept was not as far-fetched as it may seem.”

These teams have best chance to sign Stephen Strasburg – (MLB.com)
“But will Strasburg really leave? Today, we give you our first installment of our Stephen Strasburg Suitor Power Rankings, a semi-regular feature in which we break down the contenders for each of the major free agents by likelihood they’ll end up getting him.”

Forecasting The Right Side Of Nationals Infield In 2020 – (Forbes)
“[Carter] Kieboom adds an interesting twist to the Nationals’ plans because he had a rocky start in his first Major League action last season.”

New podcast: Nationals assistant GM, free agents and more awards – (The SIS Blog)
“They discuss Sam [Mondry-Cohen’s] path from batboy to front office executive … how the Nationals analytics department is structured … what it’s like to work with the coaching staff and with ace pitcher Max Scherzer…”

Nationals’ MASN payment delayed – (Washington Business Journal)
“The Washington Nationals will continue to wait for a $99 million payment from the Baltimore Orioles-controlled Mid-Atlantic Sports Network as the Orioles plan to appeal a judge’s ruling on the matter again.”

#Phillies announce they have signed INF Josh Harrison to a minor league contract with an invitation to attend spring training.

The Mets should place Robinson Cano in a bench utility role to squeeze the most out of his twilight – (New York Daily News)
“Robinson Cano’s final season with the Mariners exposed his mortality, illustrated his versatility, and most crucially to the Mets, revealed his potential.”

The Braves want us to know they’re spending (which they are) – (AJC.com)
“You get the feeling the Braves are enjoying this thing they’re doing — spending money, I believe it’s called.”