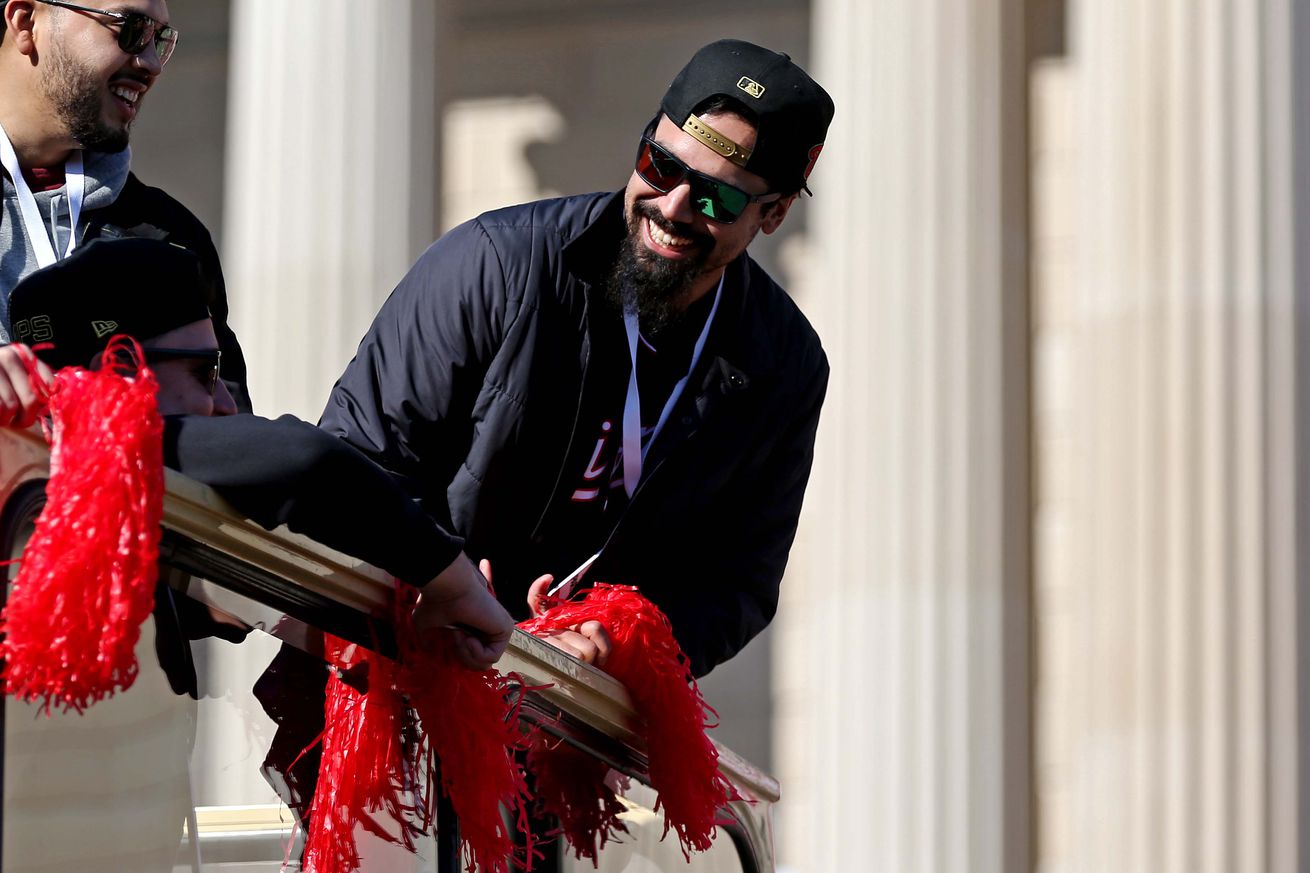 Anthony Rendon, now a free agent, received one first place vote (and no it wasn’t from a D.C.-based writer) in the National League MVP voting but ended up finishing third, on the day he rejected the Washington Nationals’ qualifying offer for the 2020 season. Where he ends up signing this winter is anybody’s guess, but if he doesn’t return to the Nationals in the coming months, he’ll be remembered as one of the best pure hitters to ever wear the curly-W. Go read your links…

Nationals must fight World Series nostalgia while building 2020 roster – (WaPost)
“’I don’t think you can create a roster with nostalgia,’ [GM Mike] Rizzo said at the annual general managers’ meetings in Scottsdale this week. ‘You’ve got to create a roster that will help us win in 2020.'”

Rendon, Stras reject Nats’ qualifying offers – (MLB.com)
“Anthony Rendon and Stephen Strasburg rejected their qualifying offers from the Nationals on Thursday, according to ESPN’s Jeff Passan. Both decisions were expected for two of the top stars available in free agency.”

Sean Doolittle on baseball’s unwritten rules, including proper champagne-spraying etiquette – (WaPost)
“Doolittle remains a champion of fun and was in awe of Juan Soto’s bat drop in Game 6 of the World Series.”

You might’ve forgotten they played for the Nationals, but these players will receive World Series rings – (NBC Sports Washington)
“Fifty players appeared in a game for Washington this season and every single one will be receiving a championship ring once they’re distributed next spring.”

Rendon places third in NL MVP voting – (MLB.com)
“Rendon put himself in the race for the National League Most Valuable Player Award with his breakout 2019 season, a career year that elevated him from perhaps baseball’s most underrated player to full-on superstar.”

Rendon finishes a distant third in NL MVP vote – (MASN)
“It’s the best MVP ranking of Rendon’s career and the third-best finish by any player in Nationals history. Bryce Harper was the unanimous winner in 2015; Daniel Murphy placed second in 2016.”

Uh oh, it’s time to look back on our preseason predictions. Let’s have a look at how a̶m̶a̶z̶i̶n̶g̶l̶y̶ terribly we predicted how the #Nationals’ season would go… https://t.co/5C8za3dKen

Nationals opened for business at general managers meetings 15 years ago – (Washington Times)
“It’s a place where GMs gather, tell stories about each other, lay the groundwork for deals and take care of other business. It’s where the Washington Nationals officially began operations 15 years ago.”

Houston restaurateur pays up on World Series bet after Washington Nationals win – (FOX 5 DC)
“On Thursday, Astros super fan Marcus Davis – who founded The Breakfast Klub restaurant in Houston – paid up on a World Series bet he made with Kamal Ben Ali, one of the family members who runs Ben’s Chili Bowl in DC.”

MLB’s Top 15 Teams: Champion Nationals Don’t Even Crack Top 5 In True-Talent Rankings – (Forbes)
“The Astros take first place in the regular-season team true-talent rankings, but the Nationals check in as a division champ, not a wild card.”

Here’s the best athlete in all 30 farm systems – (MLB.com)
“Nationals: Sterling Sharp, RHP (No. 13) – A two-sport standout in high school who was recruited to play college basketball, Sharp’s tremendous athleticism is obvious in watching him on the mound.”

Nats endeavor to get quick resolutions with Stephen Strasburg and Anthony Rendon so there’s time to move to contingency plans, if necessary. Feels like they are slightly more confident in Strasburg case. GM Mike Rizzo met in Phoenix with Boras camp, tho no word of new offers yet.