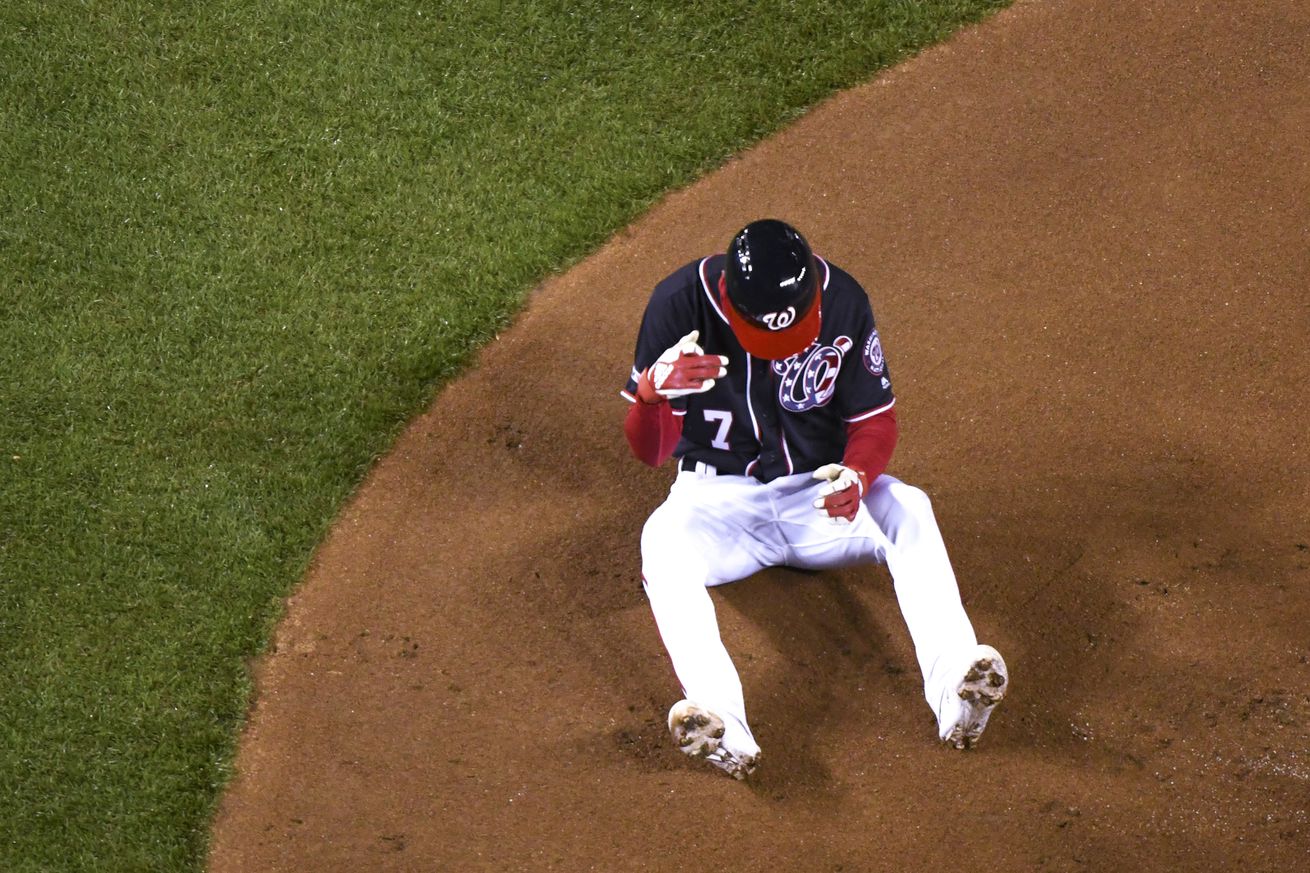 Trea Turner got his finger fixed. The FredNats got a new logo. It was a big news days! As far as the winter goes at least. When will Mike Rizzo and Co. in the Nationals’ front office strike first?

Last year at this point, Washington had already signed reliever Trevor Rosenthal (remember him) and the Nats were days away from signing Kurt Suzuki and trading for Yan Gomes.

What will Rizzo do this time around? There are a number of areas that need to be addressed in the coming weeks, but one thing we know, the Nationals will have a 10-fingered shortstop with 10 functional fingers in 2020… Huzzah! Go read your links:

According to his Instagram, Trea Turner had surgery on his index finger, which is not a surprise since it never healed during the season.

Trea Turner has surgery to repair right index finger – (WaPost)
“Last month, Turner revealed that he had hurried back from the injury earlier this season and ­never let the finger fully heal.”

Trea Turner undergoes surgery to finally fix his broken index finger – (NBC Sports Washington)
“Turner did not play from April 3 to May 17 after fracturing a knuckle on his right index finger when he turned to bunt, and a pitch from Philadelphia starter Zach Eflin struck his finger.”

After more October heroics, what’s Taylor’s future with Nats? – (MASN)
“There is one catch this time around that hasn’t been an issue before: Taylor is now out of minor league options. So he’ll either need to make the opening day roster or else be placed on waivers and offered to other clubs.”

How Condra-Bogan’s fastball compares to Doolittle’s four-seamer – (MASN)
“We continue our conversations with top Nationals prospects with Jacob Condra-Bogan. The first part of our sitdown is a look back on a very good campaign for the Duncan, S.C., native.”

And next up to the mound… we have Fredericksburg’s very own MARY WASHINGTON! Welcome, Mary, to the FredNats family. ⚾️ pic.twitter.com/pm0LSujRhR

Coach’s Corner: Voting for MLB awards is a flawed process – (fredericknewspost.com)
“No baseball in the nation’s capital seemed like heresy, so Major League Baseball bought the financially struggling Montreal Expos and brought them to D.C. as the Nationals.”

Stars who left in free agency after World Series win – (MLB.com)
“The Washington Nationals won the 2019 World Series, and, like most teams, are facing many roster decisions heading into their defending champ season in ‘20.”

Inbox: How will Phillies upgrade rotation? – (MLB.com)
“So say the Phillies sign Wheeler and Hamels to pitch alongside Aaron Nola, Jake Arrieta and probably Zach Eflin. Theoretically, it allows Philadelphia to spend is entire spring preparing Vince Velasquez and/or Nick Pivetta to pitch in the bullpen.”

Inbox: What will Marlins do about Chen? – (MLB.com)
“You bring up one of the most important questions the Marlins’ front office is dealing with this offseason: What should they do about Wei-Yin Chen? The 34-year-old’s salary for 2020 is $22 million, after he made $20 million in ’19.”

Inbox: Will signing Smith affect Braves’ plans? – (MLB.com)
“By signing Smith to his three-year, $40 million deal on Thursday, the Braves actually provided indication they will spend more freely this offseason.”