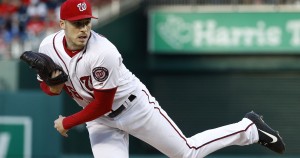 Corbin is the key to this series. Photo via Arizona republic

The 2019 World Series is here.  And boy does it look like its going to be a heck of a pitching duel.  Thanks to the Astros finishing off the Yankees in 6 games, they (like our Nats) are able to perfectly setup their rotation as they wish.  Which means … wow we’re going to have some pitching duels.

Here’s a preview of the pitching matchups, with my predictions game by game.

One thing I did want to point out.  There’s a very solid sportswriter narrative out there that teams can get “cold” with long layoffs like the Nats have had.  And there’s some SSS proof that indeed teams who sweep have a struggle in the series.  Teams are just 1 for 9 in the World Series after sweeping the LCS in four games since 1985 (when the LCS was expanded to 7 games).  See https://sports.yahoo.com/tbs-crew-explains-nationals-avoid-044927265.html (thanks Luke Erickson for the link, which you can also find on ESPN and other places).   This is obviously worrisome for the Nats, who have taken some steps to stay hot.  On the one hand, I think a veteran team will benefit from the longer layoff to rest muscles and get bodies ready to go.  I think Victor Robles will cherish the time to let his leg heal a bit.  And of course, the rest lets all the starters (most of whom were pulling double duty starting and relieving) to rest up and get into their regular schedules.   On the other hand …. 1 for 9.  And they’re going against a 107-win team.

One other thing worth pointing out: the four games in the AL gives the Nats a unique opportunity to finally be able to play their best defensive roster and stick MVP Howie Kendrick in the DH spot.  I like having Asdrubal Cabrera in the lineup with his switch-hitting bat and veteran approach and his better-than-Kendrick defense.   That’s huge for this team.