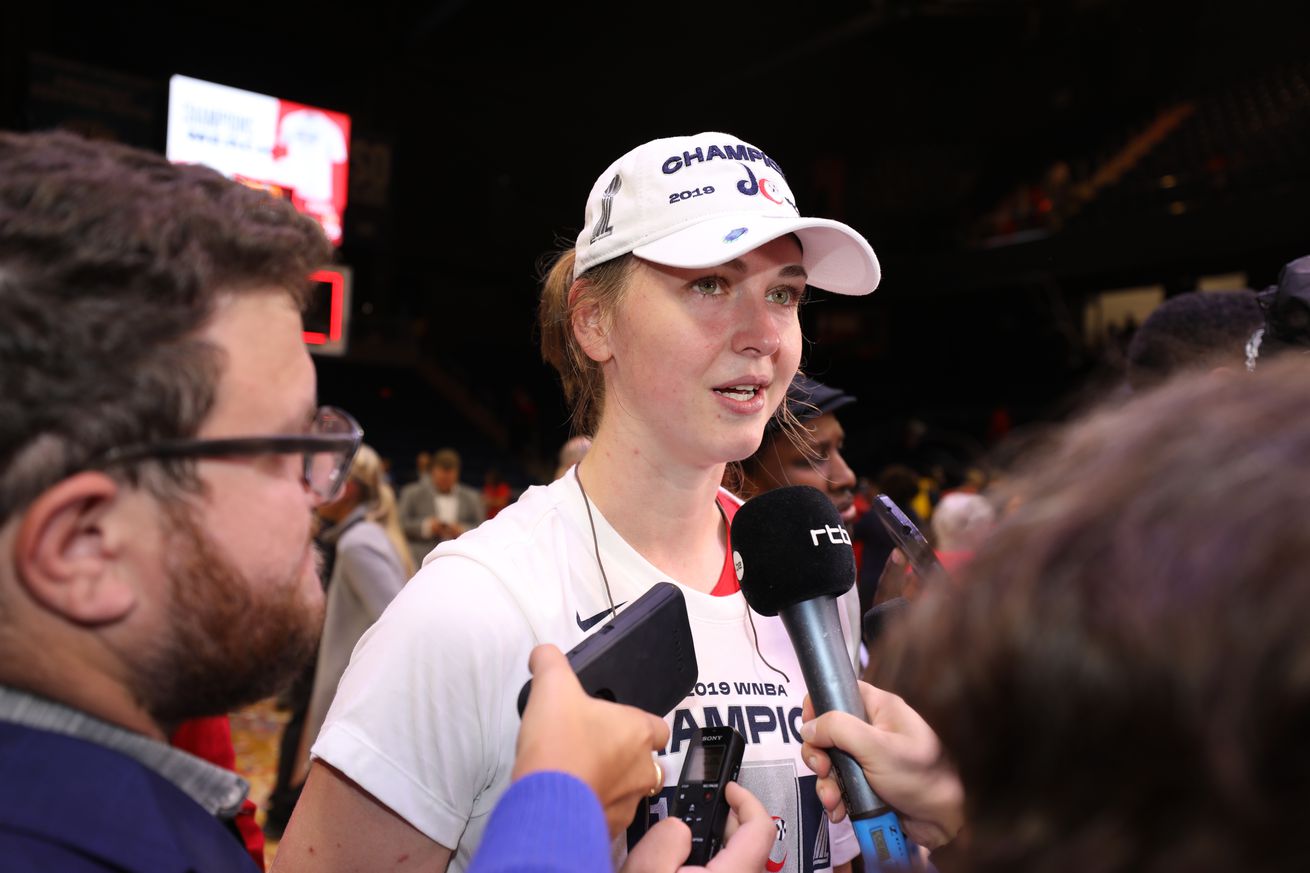 We talked about Emma Meesseman’s future with the Mystics in the second part of our roundtable. | Photo by Stephen Gosling/NBAE via Getty Images

In the second part of our roundtable with Swish Swish, we talked more about the Mystics.

I hope you all enjoyed Part 1 of our roundtable with Stéphanie Lahaye and Florian Madarasz of Swish Swish, a Francophone Belgian women’s basketball site.

In Part 2, Stéphanie and Florian talked more about what they wished to see from Emma Meesseman, how far the Belgian women’s basketball team can go and what Belgian dish you should try the next time you go to Belgium or a Belgian restaurant here in D.C.

Bullets Forever: Let’s go to Emma Meesseman and her role on the Mystics. She’s agreed to re-sign.

But what type of role do you envision her having? Can she be the first European WNBA superstar (to American fans) in a league that is starting to take a stronger stance against European winter leagues?

And does the Belgian national team’s goal hold Meesseman back from being a bigger WNBA star? I ask this because the NBA is in a more global era where the current MVP, Defensive Player of the Year and Rookie of the Year are all Europeans.

Florian: I personally see Emma as a perfect side-kick in a contender team (a Scottie Pippen for Michael Jordan, a Kevin McHale for Larry Bird, a Dwyane Wade for LeBron James, etc.).

She is a superstar based on her talent. And Albert, I think you did a good job explaining that over the year. But even if she continues to be Washington’s focal point in future deep playoff runs and wins more Finals MVP awards, her character is not to search the light and be the main face of a franchise.

The Belgium women’s national team could also have a negative impact on her starpower among WNBA fans. But she’s not alone. There are other non-American WNBA players who have big roles on their teams like Liz Cambage with Australia or Kia Nurse with Canada for instance. So people are not so concerned with that.

Stéphanie: I don’t know if Emma wants to be a “superstar,” at least from an American point of view. I think humility is one of the core parts of character, perhaps to a fault in your eyes, Albert.

Meesseman could very clearly be the Mystics’ franchise player. But you can also tell she doesn’t like being the centre of attention. Coincidentally, Elena Delle Donne doesn’t especially look for that either. However, Delle Donne seems to be more comfortable with cameras, post-match interviews etc. than Meesseman for American audiences.

I also think that Emma doesn’t put the WNBA as her top priority like most WNBA players do. This isn’t to say that she doesn’t want to play in the WNBA, since we know she’s coming back to D.C. But I don’t think Emma views the WNBA the same way American players do.

So I would summarize by saying that in terms of talent, Emma is already a superstar, especially among European fans. But she’s not looking to be a WNBA superstar. That said, if she becomes a superstar, it’s both a fluke (like her Finals MVP award) and a welcome surprise.

BF: Will the Belgian Cats head to Tokyo for the 2020 Olympics? If so, how far do you think they will go, objectively?

Stéphanie: Yeah, I think they’re gonna qualify. I really believe that. Once Belgium gets to the Olympics, they can go for a quarterfinals finish. The podium won’t be impossible to reach, but to be objective, the quarterfinal or Top-8 finish seems more realistic to me.

Florian: Yes, I think Belgium will make the Olympics. I dream of the Cats winning a medal. But to be more realistic, I’d say a Top-8 finish would be absolutely great. In fact, just making the Olympics is the goal so advancing to the knockout stage is a bonus.

But Belgium is well-known for its cuisine, more than other Western European countries like the Netherlands, Germany and the United Kingdom. Besides frietjes, waffles, beer and chocolates, what is one main course people should try if they never had Belgian food before?

Florian: First, I want to explain that there are different waffle types. I like the sweeter Gaufres de Liège, or Luikse wafels (Liege waffles) more than Brussels waffles!

Stéphanie: This is a hard one! I can’t decide between filet americain (same term in Dutch), basically the Belgian version of steak tartare … or the rabbit version of les boulets à la liégeoise, or Luikse ballen. More specifically, I would call this Les boulets sauce lapin.

BF: Last but not least, let’s talk about the city where Belgium is playing their Olympic qualifier games.

Oostende is best known to Americans for being the home of the late Marvin Gaye in the early 1980s. In fact, this is the city where he wrote some of his later hits like “Sexual Healing.”

For me at least, my favorite song from Gaye was his rendition of the American National Anthem he sang in the 1983 NBA All-Star Game in Inglewood, Ca.

What’s your favorite song by Gaye?

Florian: As a Belgian, I didn’t know this story about Oostende! That said, I do love Marvin Gaye’s music!

“Sexual Healing” is definitely a hot track. I love to sing it when there are no children around. That said I love the energy and lyrics of “Ain’t no Mountain High Enough” as well.

Stéphanie: Totally agree with Florian! “Ain’t no Mountain High Enough” is one of my favorite songs in the world!