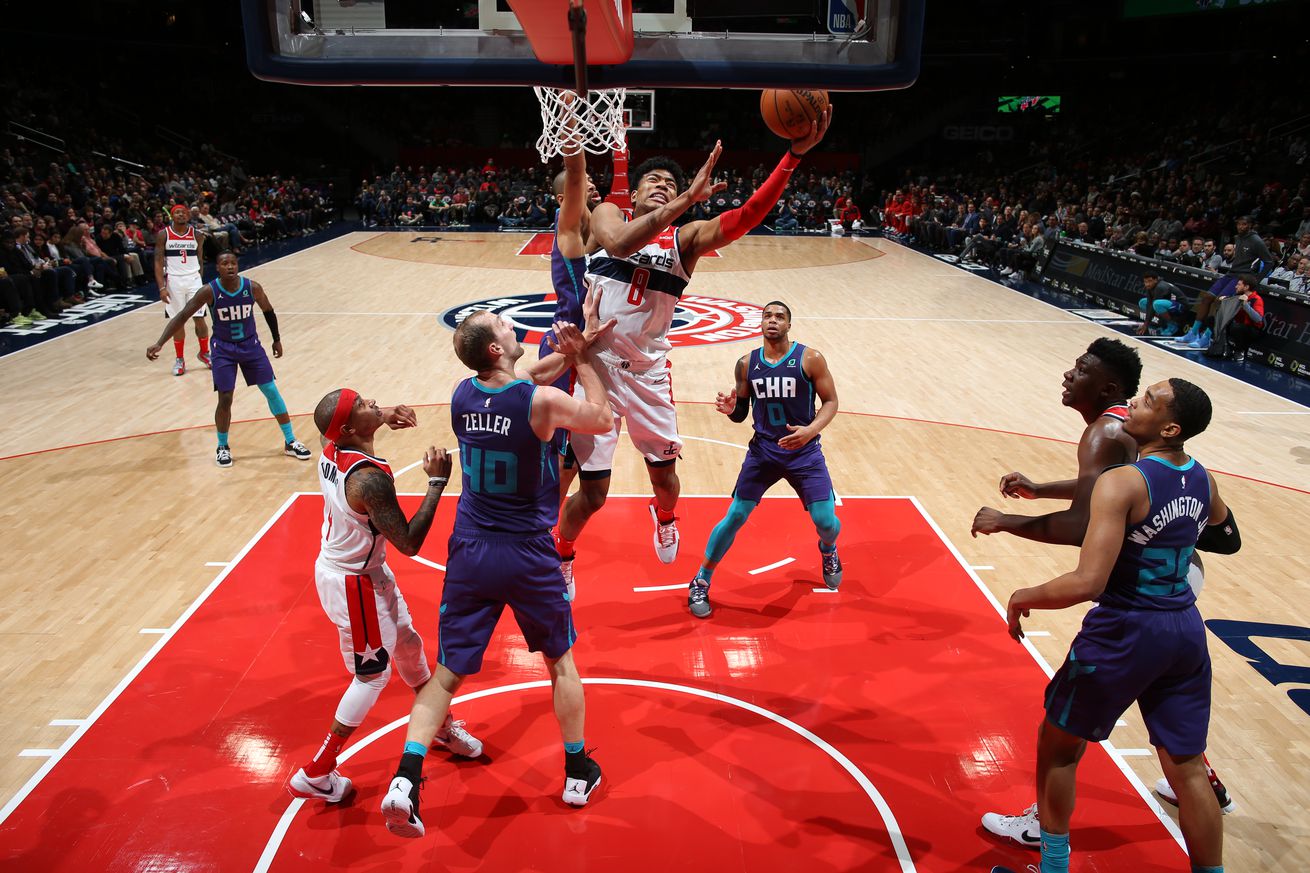 Finally, the Wizards decided to play defense — and won as a result

You’d think that the league’s best offensive team would also find a way to get some wins.

But when you’re not stopping the other team from scoring, what good are points?

On Friday night against the Charlotte Hornets, the Washington Wizards, who are the second-worst defensive team in the NBA (ahead of only the Golden State Warriors, or what’s left of them), finally decided to play defense.

After being down by double-digits, Scott Brooks made a small, yet significant change to the lineup in the fourth quarter, putting Jordan McRae — a long, capable defender — on the floor instead of rookie Rui Hachimura. Brooks also kept Ish Smith in the game after he got the offense going with steals that led to transition baskets. Washington held Charlotte to just 22 points in the fourth quarter, completing the comeback, 125-118.

Coaching can only get an NBA team so far, but every once in a while, a coach will make minor changes that make all the difference. As previously mentioned, Brooks made key decisions down the stretch by putting McRae into the game and leaving Smith on the floor.

Washington doesn’t have the personnel to be an elite defensive team and finding five players who can reach even an average level is going to be difficult for Brooks, but he managed to do that in the fourth quarter against Charlotte.

McRae bothered Charlotte’s shooters and Smith used his quickness to get his hands on the ball, creating turnovers that led to baskets on the other end — completely changing the momentum of the game. Miles Bridges, who averages 11 points per game, finished with 31 points. Eventually, he was going to cool off, but Brooks expedited that by throwing different bodies at Bridges until he inevitably returned to earth.

After this win, the Wizards find themselves just one win away from the 7th spot in the East. If Brooks decided to run with his starting five in the fourth quarter, there’s a good chance the Wizards wouldn’t have come out with a win.

There’s nothing Beal can’t do on the hardwood. He’s essentially a perfect offensive player — he’s mastered the art of making every dribble count, and it’s made him unstoppable. He scored 30 points and added 12 assists to his totals. Name an offensive play — a three in traffic, a difficult reverse layup or a pinpoint pass in the lane — and Beal probably busted it out against Charlotte.

If the Wizards keep winning games (the team has won three out of its last four), there’s no reason why Beal can’t enter the MVP conversation. He’s that good.

Davis Bertans — that’s is all

Is it too early to start campaigning for the 3-point contest?

Davis Bertans needed to be freed — and he finally has the ultimate green light. This is another thing we can credit Brooks for. Bertans could always shoot the ball, and the San Antonio Spurs have every reason to hate Marcus Morris, because they could certainly use Bertans on their roster right now. Really, everyone can use a player like Bertans — he’s a lights-out sniper with no conscience.

Bertans might miss a few shots, but his confidence remains sky-high — he’s never rattled and he needs almost no space to get his shot off. At 6-foot-10, Bertans has the height to get looks against any player in the league — and he’s, even by NBA standards, automatic.

The Latvian Laser hit six 3-point shots off the bench against Charlotte, including a key three in the fourth quarter to trim a deficit, eventually leading to the comeback. His court vision, too, was significant down the stretch as he connected with Moritz Wagner for a dunk.

Bertans is a jack-of-all trades — he knows when to cut, sets fantastic off-ball screens, is a deceptively solid pick-and-roll ball handler, and is obviously a world-class 3-point shooter.

Kudos to Brooks for giving him the green light, because if anyone on Washington’s roster should have the “shoot it every time you touch it” card, it’s Bertans.

Bonus — shout out to the Hornets’ commentating team

Washington will get tomorrow off before meeting the Sacramento Kings in the nation’s capital on Sunday.