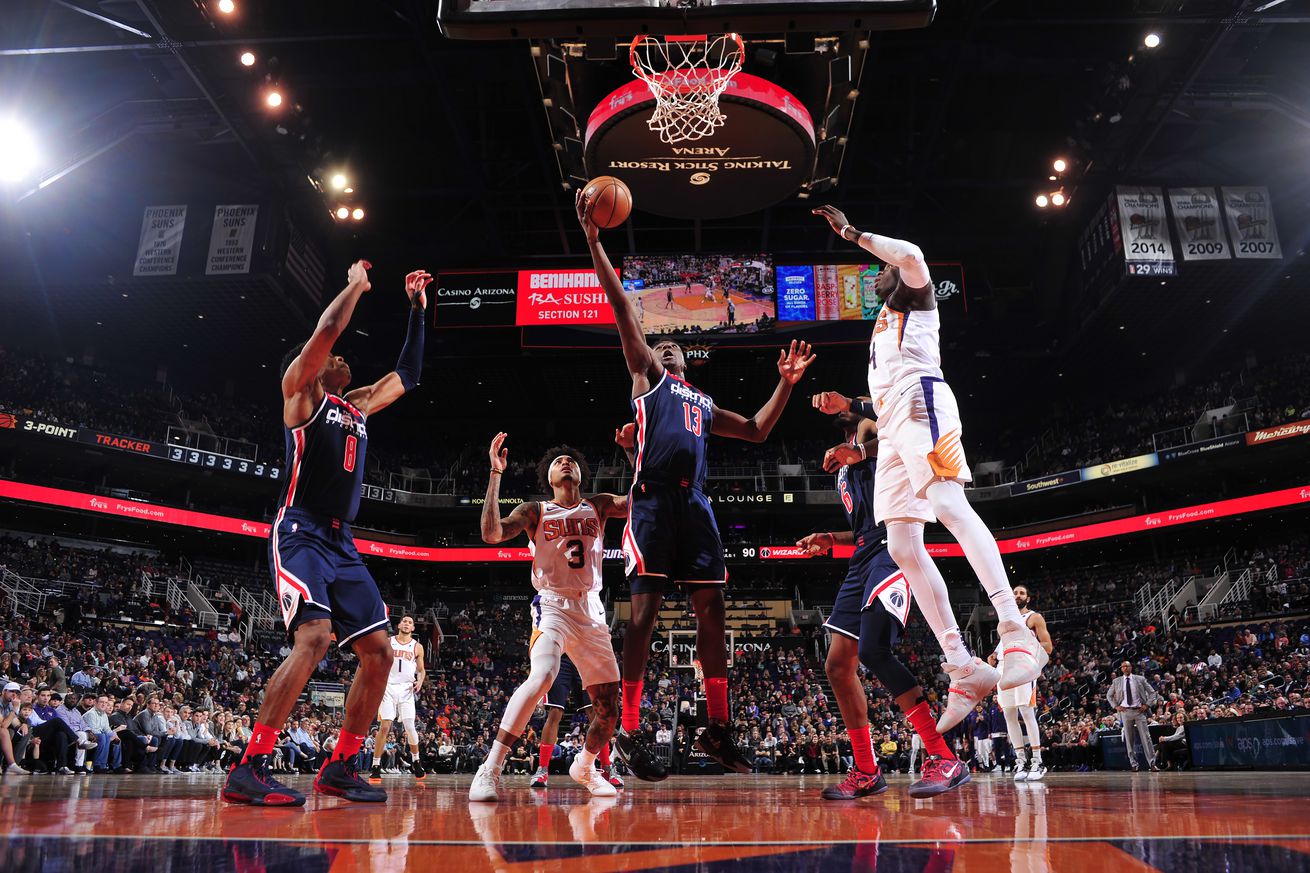 The Washington Wizards’ offensive circus put on another show, topping 130 points for the sixth time this season en route to a 140-132 victory over the Phoenix Suns.

Last season’s Wizards scored 130 or more points 10 times — but four of those were overtime games, including a triple and a double overtime. This year’s team hasn’t gone to overtime yet. And this was just their 16th game of the year.

Tonight, Washington made up for rough shooting last night against Denver with a scorched-net performance from long range in the first half. They would finish 19-35 from long range — one short of tying their franchise record for made threes, which they set in the preposterous 159-158 loss to the Rockets.

The Suns and Wizards kept the score close through most of the first half, though Washington pushed the lead to double digits in the second quarter and ended the half up five. They opened the third quarter with torrid offense and some rare defensive stops to grow the lead to 19 at one point.

The Suns rallied, however, and slashed the deficit to just four late in the fourth quarter. The Wizards responded with 16 points in the final 3:08 to push their record to 6-10.

Washington was led by another sensational performance from All-Star guard Bradley Beal, who scored 35 points on just 18 field goal attempts. Thomas Bryant, who wrecked the Suns with a 14-14 shooting night last December, was back at it, shooting 9-11 from the floor. Bryant would finish with 23 points, nine rebounds and five assists.

The Wizards also got quality performances from Ish Smith (21 points, seven assists and three steals off the bench), and Davis Bertans (16 points on nine field goal attempts — including 4-8 from three-point range).

Former Wizard Kelly Oubre (who the team traded to Phoenix for Trevor Ariza last season) had some nice moments (2-3 from three-point range), but also committed three turnovers and four fouls in just 18 minutes of playing time.

The Suns balanced offensive attack (eight of the 10 players who received minutes scored in double figures) was led by Devin Booker’s 27 points and eight assists. Dario Saric was solid with 17 points and 12 rebounds.

In his book, Basketball On Paper, Wizards assistant coach Dean Oliver formalized the four factors (offensive and defensive) that determine who wins and loses basketball games. The factors:

Washington “lost” three of the four factors, but won because of their shooting accuracy. The team that shoots better from the floor wins 78% of the time in the NBA.

Next up for the Wizards is a challenging matchup with Lebron James, Anthony Davis and the rest of the Lakers Friday night.