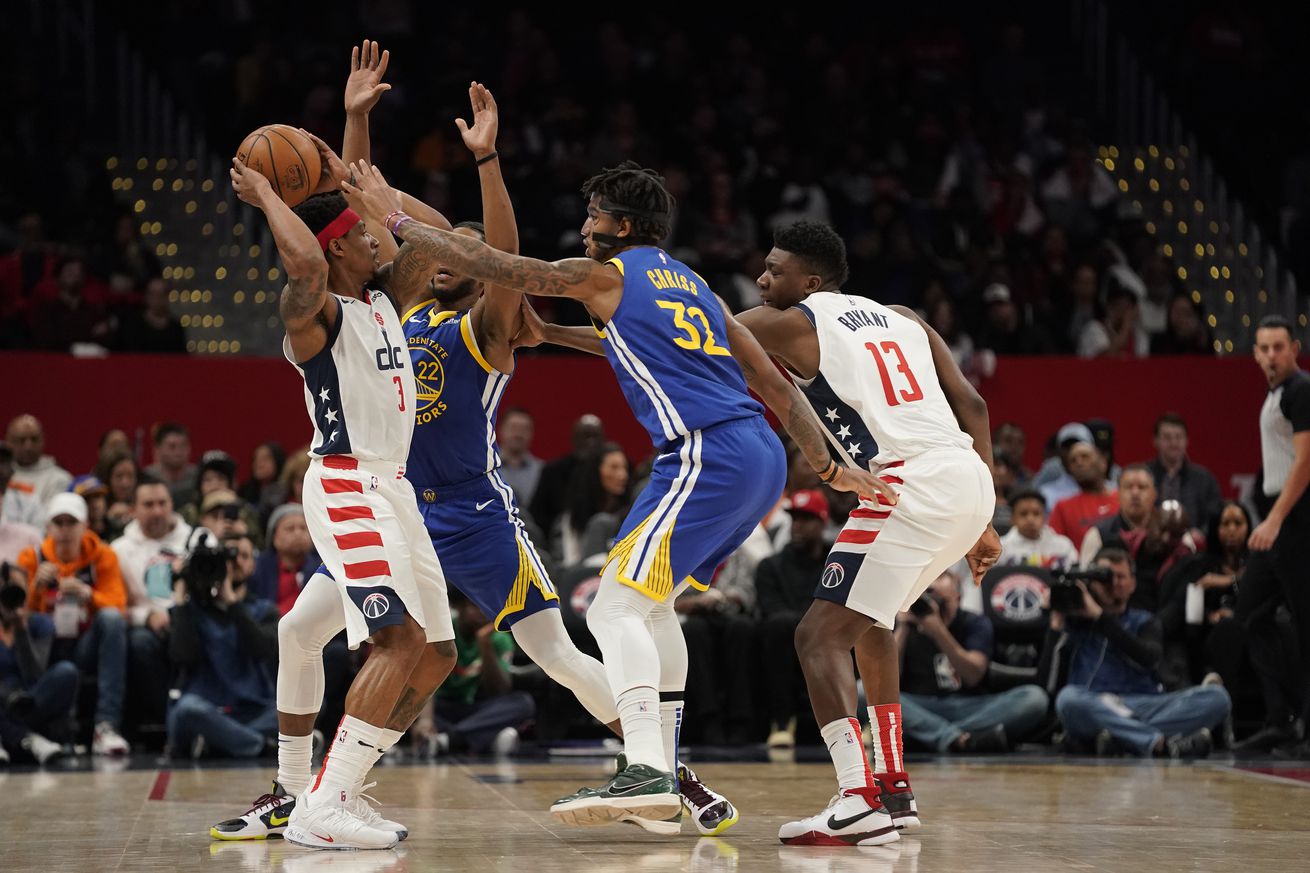 This about sums it up. | Photo by Patrick McDermott/Getty Images

43 points from Bradley Beal were not enough to save Washington from a pitiful defensive performance.

When Rui Hachimura kicked off his return from injury — and Japanese Heritage Night at Capital One Arena — with a beautiful midrange bucket, one might have expected a storybook ending to unfold. The sports hero of Japan coming back healthy just in time to put on a show for his home country, all culminating in a Wizards “W.”

Not exactly. Instead, it was the Warriors who imposed their preferred narrative on the game. In one of the team’s most complete performances of the season, and despite the absence of D’Angelo Russell and the Splash Brothers, Golden State walloped the Wizards’ vacuous defense on their way to an 125-117 win. The loss ends Washington’s two-game win streak and is the team’s final game before the NBA trade deadline on Thursday afternoon.

Not even a late run led by Bradley Beal — who was phenomenal yet again, recording 43 points and 6 assists in the loss — could save the Wizards from an embarrassing loss to the NBA’s worst team. Suffice to say, the effort level was not particularly high.

Warriors rookie Eric Paschall just got 14 offensive rebounds on the same play. Actually, it was 4 but still holy crap. pic.twitter.com/TszKq4VpXQ

Golden State hit 11-of-18 three-pointers in the first two periods en route to a 72-point explosion by the game’s midway point. Wizards fans are no strangers to abysmal defensive efforts — it was only a week ago today that Milwaukee took the Wizards for an 88-point ride through 24 minutes. But the likes of Alec Burks (30 points) and Glenn Robinson III (22 points) are hardly as foreboding as what the Bucks offer.

Naturally, Golden State continued its offensive onslaught in the second half, canning 8 of their first 10 shots and surging to a 19-point lead with 5:41 left in the third quarter. The Warriors were led by some spectacular shooting from Burks and Damion Lee, each of whom hit 5 three-pointers.

Washington made its trademark #fakerally early in the fourth quarter, with Beal and Davis Bertans (19 points) hitting just enough threes to get the Wizards back within single digits — even as close as five points — but they never quite got over the mountain.

In the course of Monday’s game, Beal passed John Wall for third place on the Wizards’ all-time scoring list (and then some). This obviously comes with some sadness, as Wall very well might be higher on the franchise leaderboard had he not been saddled with injuries over the past several years. Still, it’s worth celebrating Beal’s accomplishments since being drafted by the Wizards so many years ago — and he’s been absolutely on fire as of late.

It’s also worth noting that Wall took the news in stride, as indicated by his mid-game message to Beal:

Congratulations, @RealDealBeal23! @JohnWall has a message for you ❤️ pic.twitter.com/qmpG1SJLZV

Though the night may not have gone exactly how he’d hoped, Hachimura still finished with 11 points and 8 rebounds over his 26 minutes (Scott Brooks noted before the game that Hachimura played with a minutes limit). It was good to see Hachimura get out there and run around for the first time in several weeks, and he looked about as smooth as one could ask after such a tormenting injury.

Next Up: The Wizards will not play again until after Thursday’s trade deadline, meaning the team could look different before the team plays at home vs Dallas on Friday.