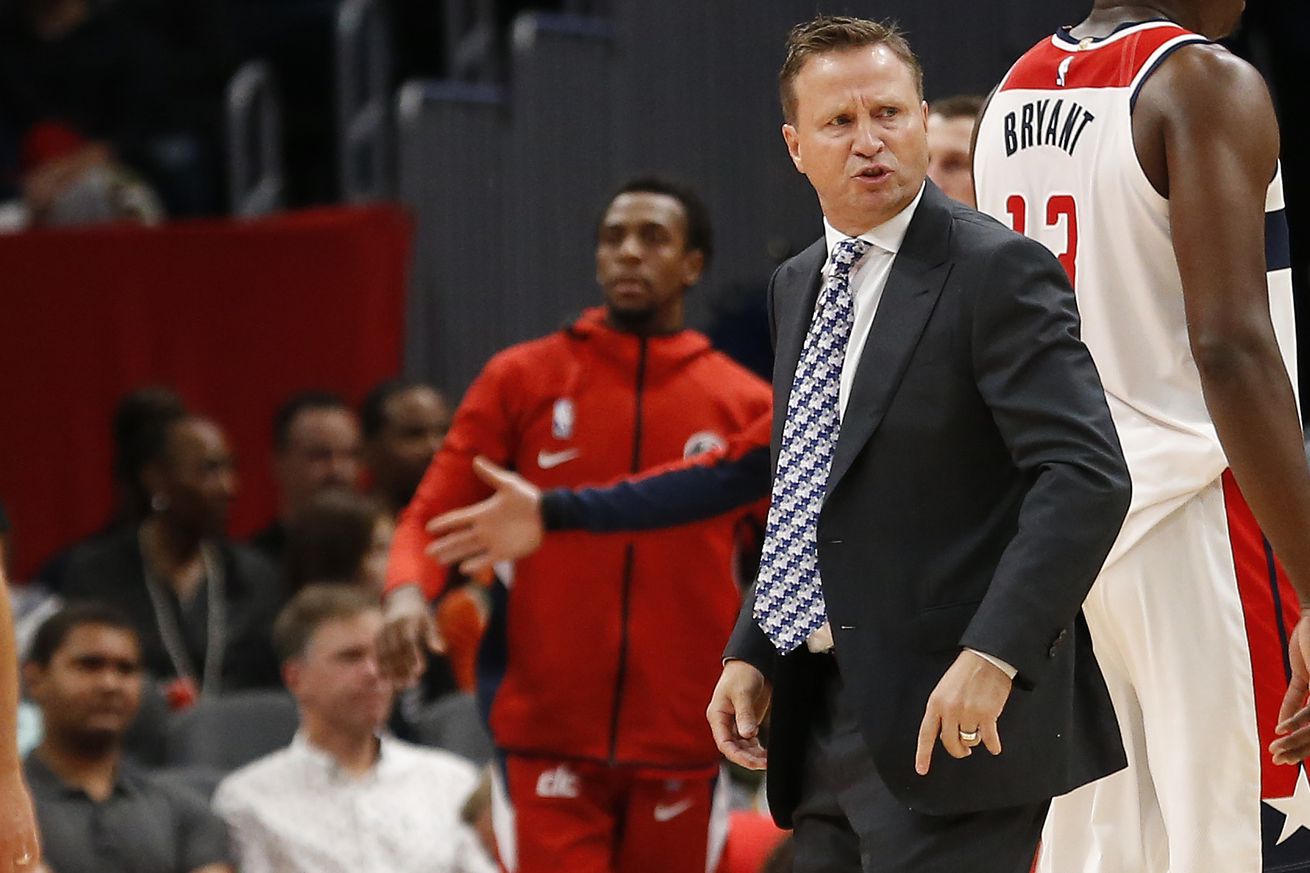 CJ Miles is slowly creeping in the rotation ahead of Bonga

Three games into the season, the Washington Wizards looked like they were going to surprise some folks. A road win against the Oklahoma City Thunder and two nail-biting losses versus the San Antonio Spurs and Houston Rockets made it seem like the Wizards were going to be better than we originally thought.

Fast-forward seven games, and the Wizards find themselves exactly where everyone expected — the bottom of the conference. The early-season optimism was tempered by losses to the Karl-Anthony Towns-less Timberwolves and the rebuilding Cavaliers, and each loss highlighted the team’s seemingly incurable defensive struggles.

When this sort of shift in outlook occurs, it’s important to recognize that, win or lose, the Wizards have one goal in mind — to develop the young talent and build for the future.

The goal can get lost when the defeates pile up, especially against teams that are also likely heading to the lottery.

Obviously, the fans can’t dictate the direction of the team — which puts all the pressure on Scott Brooks to be cognizant of the goal.

Prior to coming to Washington, Brooks was known for player development. Kevin Durant and Russell Westbrook both became MVP-caliber under Brooks. Whether Brooks was primarily responsible is irrelevant – because Brooks was hired to help the Wizards, who were struggling to get out of the second round, make a similar leap. Many of the players who were on the roster at the time — namely Otto Porter and Kelly Oubre — are no longer around, and have since been replaced by raw prospects who need to be molded.

Troy Brown Jr. is in that bunch.

After last Saturday’s 113-100 loss against Cleveland, a game in which Brown only scored three points on 1-8 shooing, Brooks acknowledged Brown’s less-than-ideal performance.

At 20-years-old, Brown is among the youngest players in the NBA, despite being in his second season. He’s the same age as rookies Ja Morant and Cam Reddish. Last year, Brown played just 730 minutes in the NBA, having spent most of his time in the G-League.

These struggles are going to happen. Brown is going to have bad shooting nights — many of them.

And while it’s going to be frustrating to watch — and it’s going to happen with others, including Rui Hachimura, who went scoreless against the Indiana Pacers — Brooks can’t afford to lose sight of the goal.

In the past, Brooks has benched his young players for veterans — and Brown’s development was put on the backburner so journeymen like Wesley Johnson and Ron Baker, neither of whom are in the NBA anymore, could get minutes.

Brown’s slump brought flashbacks of those coaching errors, especially because he made his first start of the season against Cleveland. It’s easy to envision a scenario where Brooks becomes impatient and benches Brown, again, for a veteran such as CJ Miles.

And that’s the scenario 20-year-old forward Isaac Bonga, who started before Brown returned from injury, is dealing with now.

Brooks sat Bonga for two straight games before giving him garbage time minutes against the Minnesota Timberwolves on Friday night. Bonga has played less than three minutes in three games — which seems to go against the notion of player development, particularly when the player getting time ahead of him, Miles, has played double-digit minutes in each of the games he’s been active.

One could argue that Washington is attempting to showcase Miles to increase his trade value — but the return they could get for him likely isn’t more than what Bonga already brings to the table (a young prospect who’s shown some flashes of productivity). And if Brooks is hellbent on playing Miles for the sake of having a veteran on the floor, then Bonga should be sent to the G-League. Jordan McRae, who’s shooting a career-low 38 percent from the floor, has also found a consistent spot in the rotation ahead of Bonga.

Whether it happens in the NBA or in the G-League, the Wizards — specifically Brooks — have to find a way to get actual game action for their young players, because if Brooks wants to stick around in D.C. to see these players develop, gluing them to the bench is not an effective way to accomplish that goal.

Brooks is in the minority of coaches in the NBA who won’t be judged by wins and losses. The front office and ownership are going to assess Brooks based on the way the young players come along this season. Benching someone like Brown or Bonga in favor of a veteran shows a significant loss of confidence in the youth.

Having the patience to work through the growing pains and allowing the players to learn on the floor while going through rough patches is a sign of a coach ready to commit long-term.

Washington will use this season to determine whether Brooks is that coach — and right now, the question remains unanswered.