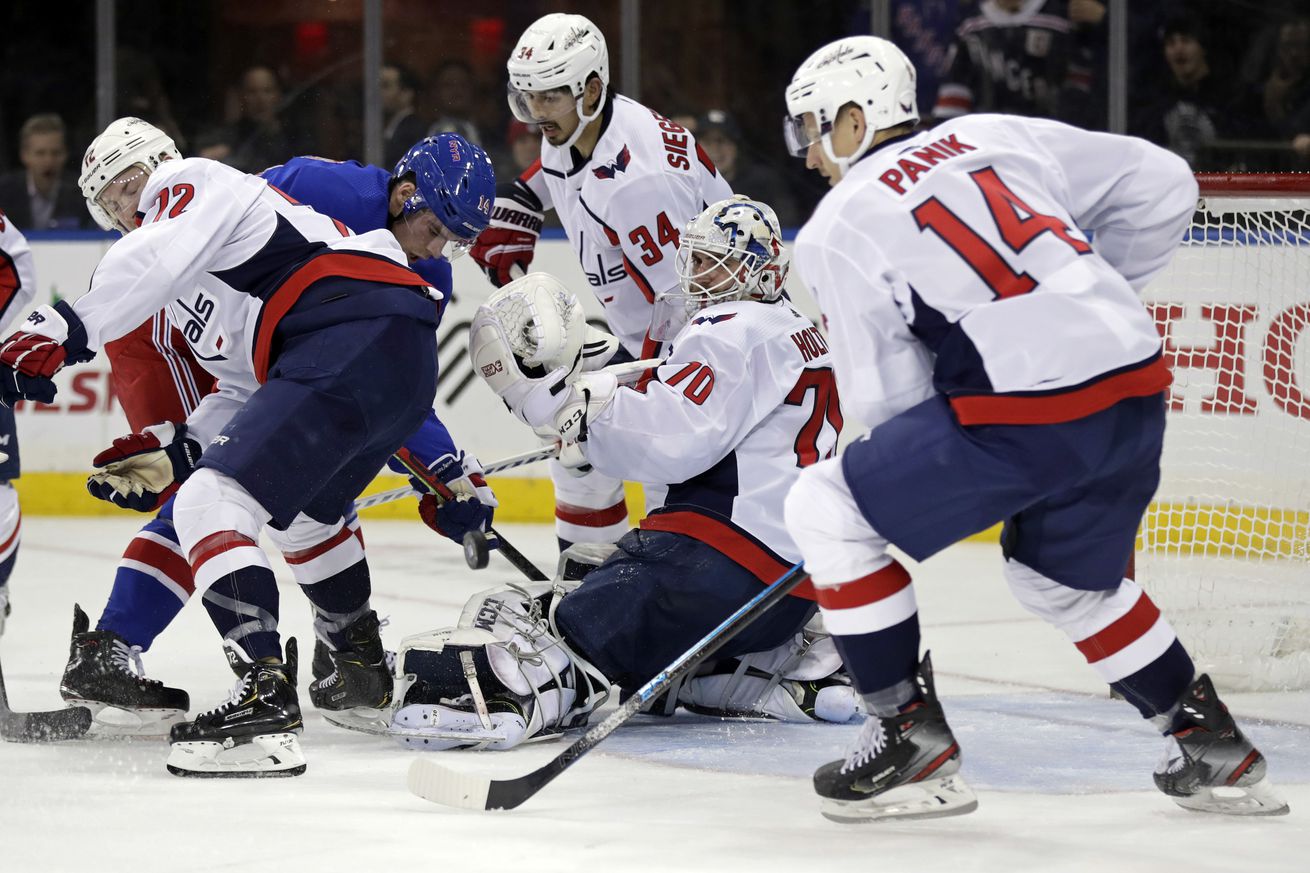 The Washington Capitals got off to a promising start against the New York Rangers Wednesday night, by crossbars and penalties led to a lopsided 4-1 defeat in Midtown.

Primetime. The Big City. Big-name franchises. And for a while, a whole lot of nothing.

Wednesday’s national televised tilt between the Washington Capitals and the New York Rangers was dominated early on by the Caps, save for a few breakdowns that goaltender Braden Holtby dispatched with relative ease.

Towards the latter half of the frame, the Caps finally put their puck possession to work, hitting the post three times and whiffing on a wide-open net. Hockey is fickle, however, and the league-best Caps and Rangers, owners of the fifth-worst points total in the NHL, both left the first period empty-handed.

In the second, Artemi Panarin quickly made up for the red light eco-friendly first period, scoring 74 seconds into the second frame as Wilson sat in the box. The story of the middle period was much like the first. The Capitals were the superior team, hitting the post at least three times but failed to score.

Things looked optimistic for the Capitals heading to the final 20 minutes of regulation as they continued to drive play. But the orange armband would go up once again when Dmitry Orlov committed an ill-advised infraction. Panarin captured himself another goal on the man-advantage. Just 23 seconds later, Pavel Buchnevich knocked a give-and-go past Holtby. Evgeny Kuznetsov was able to get one back for the Capitals, but the game went downhill from there, ending with scraps, late hits, a fight and another Rangers goal on route to a 4-1 victory for the Blueshirts.

Plus: The Capitals dominated possession. They hit the post. They missed some empty nets. For a while, the game was theirs for the taking. The game was not as lopsided as the score would suggest. Life’s not fair, etc., etc.

Minus: The Capitals were reckless in the offensive zone. They took three penalties in the attacking area and it cost them the game. First, Tom Wilson got called for a board with 34 seconds left in the first and the Rangers converted on the other half of the intermission. Alex Ovechkin managed to trip someone with eight seconds left in the second and once again, the Rangers made the Caps pay after the break. Then, Dmitry Orlov tried to lift a stick near the red line and ended up clocking a New York player in the face. It’s not what you want. The Rangers didn’t look back.

1. Tom Wilson has turned himself into a wrecking-ball who seemingly served no other purposed than to bump into people, sometimes punch them and return to the bench with nothing to show for it. Now, he’s a legitimate top-line player. Well, T-Willy, as Doc Emrick kept calling him for some reason, committed a useless boarding penalty. This recap is all about useless penalties, but we don’t need the early career Wilson pinball returning.

2. Beck Malenstyn has a memorable NHL debut, using his speed to generate a breakaway chance on Henrik Lundqvist in the first period and finishing the frame with a pair of shots. His presence was noticeable as a replacement for the suspended Garnet Hathaway on the fourth line for Washington.

3. Michael Sgarbossa, making his Washington debut and playing his first NHL game since his days as a Panther in 2017, delivered a couple of hits as the third-line center in the shuffle with Nicklas Backstrom’s injury.

4. Washington’s first power play of the night created some looks, but Lars Eller — filling in for Backstrom — rang the iron. Yet another close call.

5. In the second Washington chance, the Rangers shaded towards Ovechkin, leaving some room for Kuznetsov to move, and he did, moving in and beating Lundqvist to put the Capitals on the board.

6. Washington got a third power play chance with just over three minutes to play, and made it a 6-on-4 by pulling Holtby. The Caps didn’t show a lot of urgency down three, and the Rangers had the better scoring chances on the empty net before the Krieder minor expired.

7. Taking foolish penalties is one thing. But the Capitals had four power plays. Washington came into the game with 11 PP goals on the road, most in the league, and the Rangers have a sub-par PK. The Caps were outclassed on special teams.

8. Ovechkin was on a mission to make world a little more toothless, when his no look backhand flip of the puck hit referee Furman South right in the mouth, requiring five stitches.

The Capitals coaching staff should tell their players to be careful where they wave their sticks and throw their bodies in the offensive zone, chalk up their missed opportunities in part to bad luck and move on to Saturday’s lunchtime game against the Canucks in D.C. It was a weird game and it didn’t fall Washington’s way.