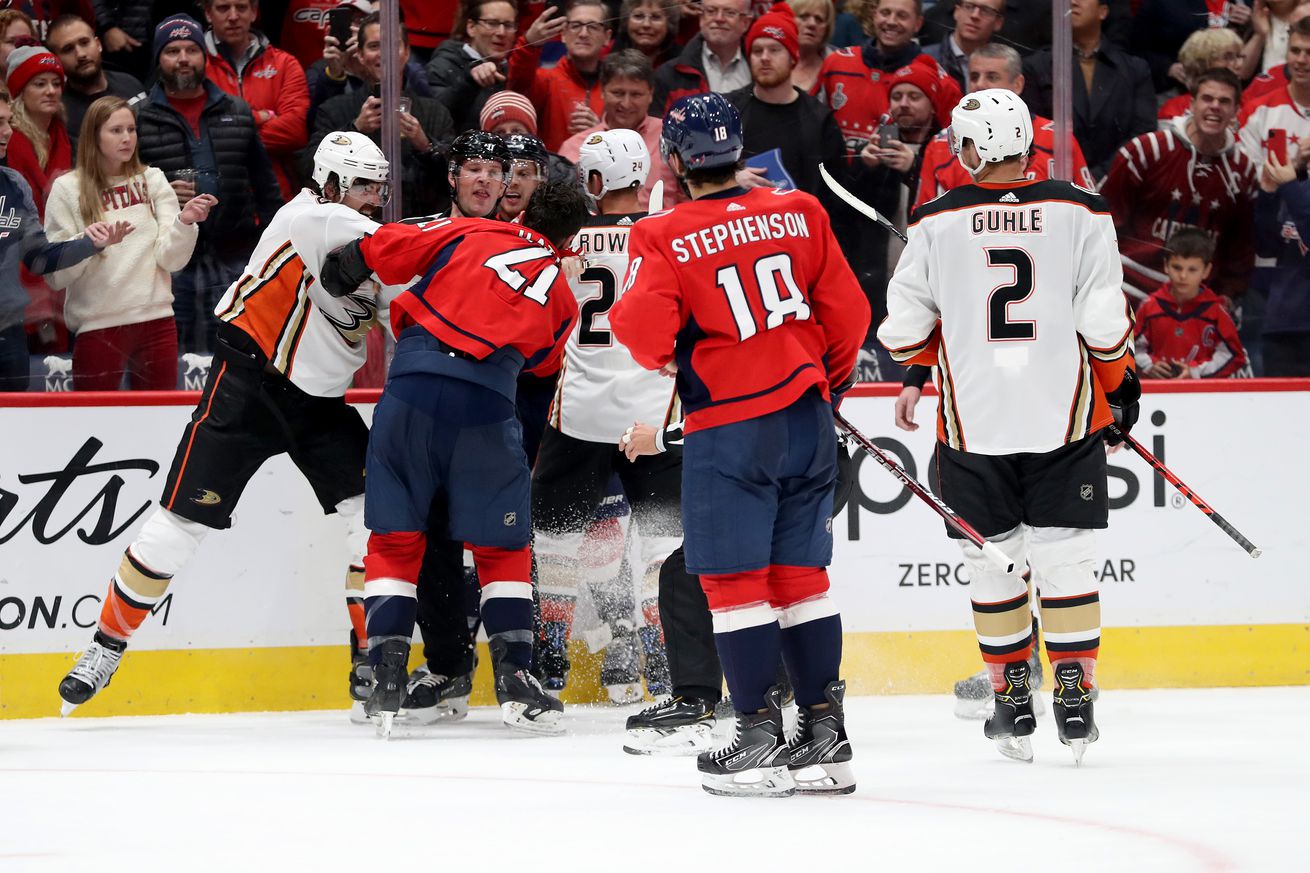 The Caps played what should have been just an ordinary weeknight game in November on Monday. It might have been the sort of game that defines a club.

Inter-conference games do not often generate a lot of attention, and they are rarely meaningful in any sense of “rivalry”. Monday night, however, the Washington Capitals might have played such a game that will go some way to defining this team’s identity for the near future.

The game pitting the Caps against the Anaheim Ducks started innocently enough – pleasantly in fact for Caps fans, with an early goal by Richard Panik, his first with the Caps. When Alex Ovechkin added a power play goal early in the second period (hardly an unusual occurrence for a Caps game) it seemed as if this would be just another workmanlike night on a weeknight in November.

But then, with the clock ticking under a minute to go in the period, things took a turn…

Brendan Leipsic, a Van de Graff generator of sparks on skates, leveled Derek Grant to the side of the Ducks’ net. As a melee unfolded, Chandler Stephenson scored for the Caps, but it was almost an afterthought in the moment as the teams squared off, and Garnet Hathaway took center stage, flattening Grant with a right hand, locking up with Nick Ritchie, and then having to fend off Erik Gudbranson as the officials struggled to separate the combatants. It was a sequence right out of the brawl-filled ‘80s.

When the dust settled, Leipsic was sent off on a double minor penalty for roughing, and Hathaway was given the rest of the evening to contemplate his sins from the locker room with a major for fighting and a match penalty for spitting on Gudbranson in the midst of their altercation.

This was merely the latest, and perhaps most visible example of what Hathaway and Leipsic bring to this club – a snarl that seemed to be lacking at times last season but one that has an ability to galvanize the team. Keep in mind that the Caps, who gagged on a four-goal lead and a 5-3 advantage heading into the third period of a game against this team last year on the same ice sheet, losing in regulation, 6-5, posted an early goal in the third period and allowed a couple of cosmetic tallies before salting the game away with an empty netter in a 5-2 win.

In other spaces, we speak in terms of “grittership” numbers – hits, blocked shots, penalty minutes, etc. – the dirty work that is performed by players who are not stars that is often important in establishing a team’s identity and for its success. The Caps brought in Hathaway and Leipsic to fill those roles, and they’ve been up to the task so far. Hathaway is second among Caps forwards in credited hits through Monday, his 65 hits trailing only Tom Wilson (79). He has 14 blocked shots, fourth among forwards despite averaging only 11:38 in ice time. And, until last night, he did it by largely playing within the rules, posting only 15 penalty minutes in 21 games before doubling his total against the Ducks. He has also contributed a pair goals and seven points, satisfactory numbers for a player who gets largely fourth-line minutes.

Leipsic might be an even more complex specimen. The hit he put on Derek Grant in the waning moments of the second period on Monday night that led to the Caps’ third goal was the sort that brought fans out of their seats the same way an end-to-end rush for a goal might. It was arguably the turning point of what had been a rather ordinary game. But when you look back at his evening in black and white, he was credited with no points, a shot on goal, and three hits… pretty average for a fourth liner.

And that has been Leipsic this season, a player whose numbers look ordinary, given his fourth line role. His 2-5-7 scoring line matches that of Hathaway, and his 19 hits are fifth among forwards, only two more than the less physical Chandler Stephenson. He has nine blocked shots, the same number as that of Alex Ovechkin. But he has done this while averaging less than ten minutes of ice time per game (9:21), lowest among all Caps skaters so far this season. And, you do seem to have to manage that ice time (the Caps have lost every game in which he skated more than 11:30, 0-3-1). But he brings a certain energy to the ice that is not part of the quantifiable element of the game. It is of a sort that binds a player to fans and makes him respected in the locker room, and it is difficult to put a price on that.

The Hathaway-Leipsic moment at the end of the second period against Anaheim was not the sort of hockey that is played regularly in the NHL these days and might be frowned upon by the league generally (as of this writing it remains possible that Hathaway will be fined, if not suspended, for his behavior toward Erik Gudbranson).

But it is the sort that can help define a team’s personality going forward. In this case, the Caps – already perceived as a team that plays “heavy” hockey – might be developing a personality that is fearless, ornery, and of a one-for-all, all-for-one nature.

Make no mistake, no one’s condoning some of the actions that Garnet Hathaway took in the heat of the moment on Monday night. And it appears the player feels the same way. However, while the Hathaway-Leipsic moment might not be Butch and Sundance meeting the Bolivian Army at the end of the movie, “Netsy and Brendance” might be the pair that defines the Caps in a way very different than how the “stars” usually do it. It might be the secret ingredient for a happier ending this season than Butch and Sundance faced.