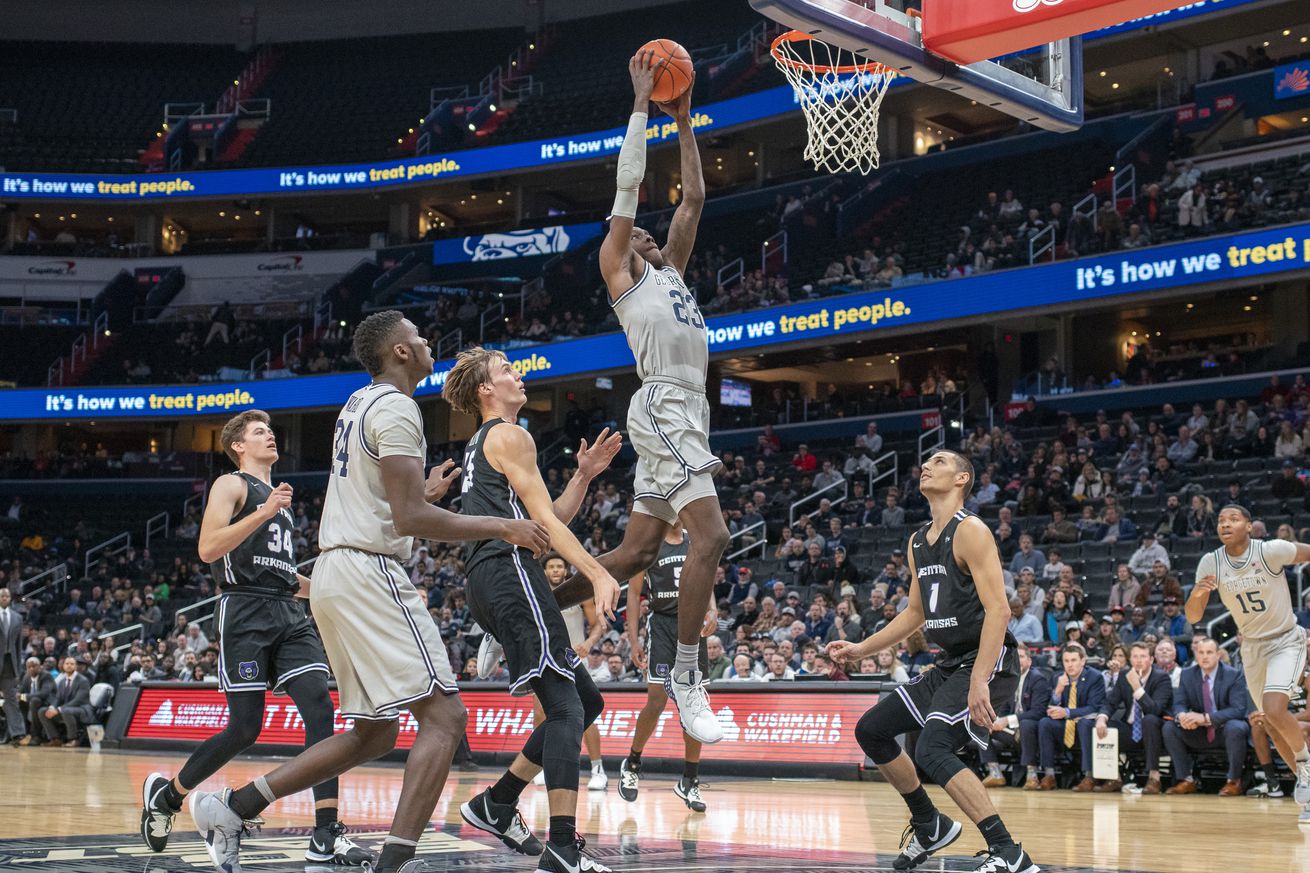 Where: Capital One Arena

Georgetown looks to improve to 3-0 on the season and even its all-time Gavitt Tipoff Classic record when Penn State visits the Hoyas downtown home for the first time since 2004. In the past the Hoyas have dropped home and away games to Maryland and won at Illinois last season in this competition.

It should be a great early season test for coach Patrick Ewing’s team who hasn’t exactly looked as expected in either of the first two games.

Omer Yurtseven, however, has looked just as advertised in recording double-doubles in his first two games as a Hoya. For his efforts Yurtseven made the first of what will likely be many appearances on the BIG EAST Weekly Honor Roll.

While the margin wasn’t as large as expected against Central Arkansas the Hoyas did survive a pretty off night offensively from James Akinjo and Mac McClung. Jagan Mosely has started the season out perfect through two games and Jamorko Pickett has been solid.

The defense – particularly in transition – remains a question mark but we should know more after Penn State. Another thing to watch is whether Ewing continues to work in his press against better competition.

Can the Hoyas win the first of many match-ups against another Bubble-ish team?

Yes, it’s only November 14th but this Georgetown Penn State game could loom large come March as both teams try get back to the NCAA Tournament after long breaks. With a tough schedule coming up – particularly away from Capital One Arena, the Hoyas need to take care of business at home.

Will Ewing shorten his bench?

In the season opener Ewing went with an NBA style second unit. It’s a unit that I like to refer to as the Teal Team. The results weren’t great and played a large part into Mount St. Mary’s hanging around far longer than expected. Now the Mountaineers have since played Washington tight as well so it may prove that they are better than expected. Still, the Hoyas second unit problems are something worth talking about. I asked Ewing after the Central Arkansas game if he wanted to play as many as 11 players in a game and he said it would depend. My guess is that the bench shrinks against better competition to at the most nine guys. Who gets squeezed? That’s the big question. The other solution is to mix in some starters in the second unit so the drop-off isn’t as pronounced.

Will Josh LeBlanc make his first start of the season?

After being suspended for the opener, LeBlanc came off the bench against Central Arkansas. The talented sophomore had started the last 22 games of his freshman campaign. Both players most likely to take a seat for LeBlanc – Jamorko Pickett and Jagan Mosely – have gotten off to good starts so it might make the decision a bit harder for coach Ewing. My guess? Mosely goes to the bench yet continues to see a good number of minutes.

In a battle of schools that love the “WE ARE” chant, Brandon Bowman led the Hoyas with 28 points while Jeff Green had a double-double and Jonathan Wallace went for 10 points in a 2004 Georgetown victory.

Lamar Stevens is the player to watch here. The senior forward is already fifth in school history in points and ranks 15th in rebounding. Last season Stevens led the Big Ten in both scoring and rebounding and is on the Karl Malone Award watch list this season. Coach Pat Chambers is entering his ninth season and has yet to reach the NCAA Tournament although hopes are high this season. Chambers did guide the Nittany Lions to the NIT crown two years ago.

Big man Mike Watkins should give Yurtseven a test down low. Watkins averages just under a double-double at 9.5 points and 9.5 rebounds per game. Myles Dread, Myreon Jones, and Jamari Wheeler round out the starting five, giving Chambers a three-guard look. Dread got hot in the season opening win from deep, connecting on five 3-pointers.

Again, this will all be about how the Hoyas can handle Steven as he might be one of the best players Georgetown faces all season.