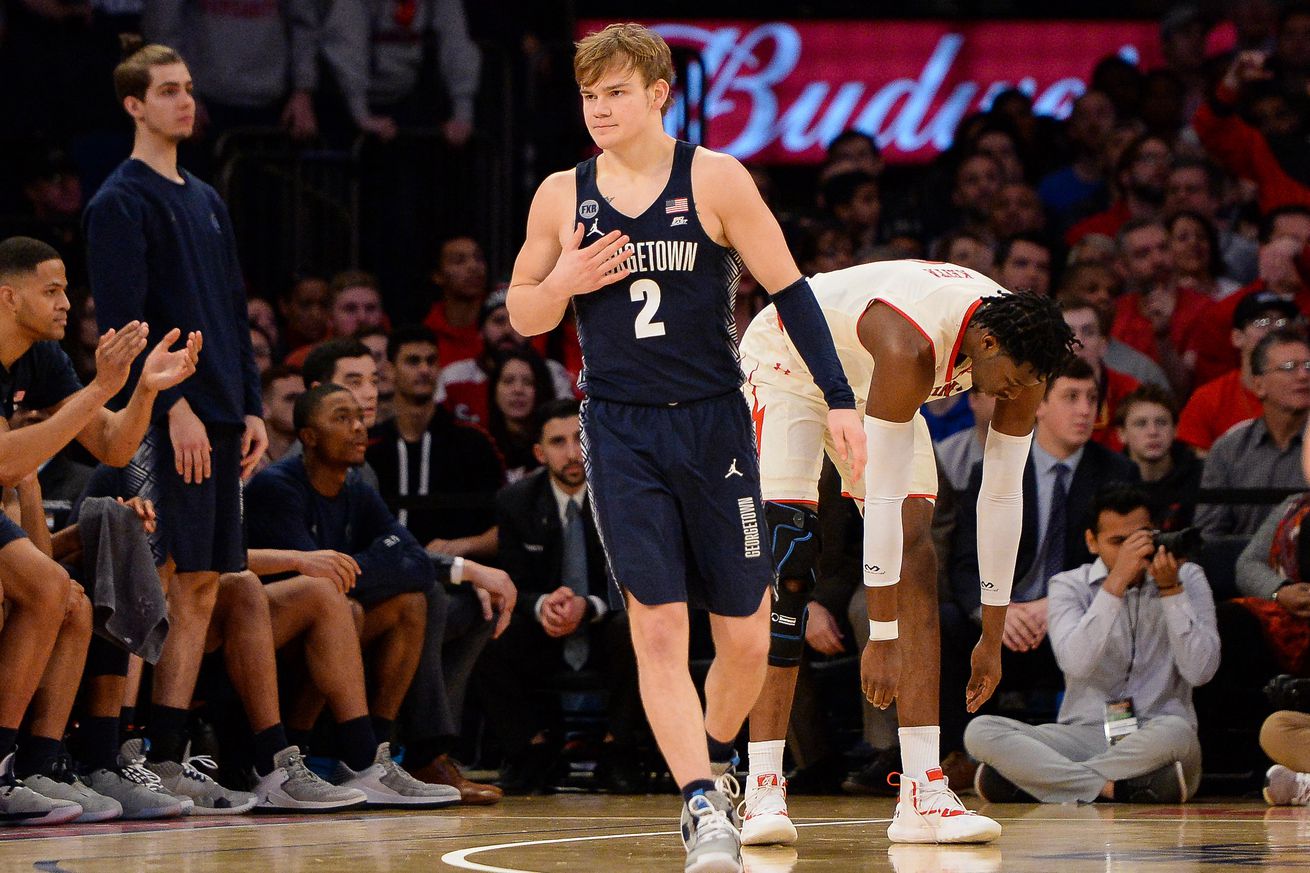 Hoyas cannot afford another loss, but needs to focus on energy, effort, & strong start at MSG…

What the schedulers expected to be a Big Game battle between age-old rivals, on Super Bowl Sunday, has turned into a pair of two-win teams meeting for some heavy drink in the basement. This is clearly the darkest timeline.

Last meeting, January 8th, the Hoyas matched up nicely against the Johnnies—at least for the first half. St. John’s is not a bad team by any stretch of the imagination, and have had similar “almost success” against some of the top teams in the conference and beyond. The other week when they visited D.C., St. John’s did have two fewer days of rest and preparation than the Hoyas due to FOX scheduling their Xavier game to follow NFL playoffs. St. John’s ha struggled in the conference and lost to Villanova on Tuesday at MSG, 59-79, but beat DePaul in Chicago last weekend, 79-66, for a “Quad One” win (wow). Rasheem Dunn has firmly joined Heron and Figueroa as a team leader the past few weeks.

Overall the prior meeting with St. John’s felt more like Texas, OSU, or SMU than, e.g., Xavier or Butler. Georgetown should match up well again if they can handle the fatigue from the press. St. John’s still lacks interior size and has not added a pick-and-roll game in the half-court. Perhaps more importantly for a poor perimeter defense like Georgetown’s, outside of two key guys, the Red Storm also continues to shoot threes at a low percentage (28.4% in conference).

The Hoyas cannot afford slow starts in either half, but Ewing’s teams tend to open up awake against opponents who like to push the pace and/or bring pressure. The Johnnies certainly play fast, like GU.

The Butler and Marquette games need to be far from the players’ minds as they make a trip up to Ewing’s home-away-from home. With the right focus, they can start a new winning streak based on consistent effort and disciplined shot selection.

Here are the links:

L.J. Figueroa is a versatile scorer who is heavily involved in the St. John’s offense and takes plenty of shots. He is also a very capable defender. He has to be guarded from three-point range and is a good passer and ball-handler as well. Dunn is a facilitator with the ability to create off dribble-drive but he doesn’t need to be guarded beyond the arc. Heron is a capable scorer who drains the three-ball at a 38.6% clip.

Rasheem Dunn with a quick five points in the second half and #SJUBB trails 46-35 with 15:02 to play.

Dunn now with 13 on the game. pic.twitter.com/LkMhPCVC0Z

The Johnnies played reasonably well up to the 14 minute mark of the second half. That is when a seven minute blitz by the #8 team in the country did them in. During the game there were several missed layups which the team usually makes.

The immediate challenges for the team are to cut down on unforced offensive turnovers and to find a way to engage the front court throughout the game as they did at the beginning of both halves. The next four games with three at home are all winnable but consistency needs to set in for the team to redeem its season.

The opening minutes of the first half saw the Wildcats get out to a slow start, which at this point is (unfortunately) par for the course. St. John’s came out of the gates with energy, getting a dunk, corner three, and block all in a short sequence to get the crowd going. Applying pressure and running off of misses, the Johnnies set the tempo early and rolled to a quick lead.

The Wildcats got back into the game by dominating the glass and generating second chance points off of misses. [] From there, Villanova would dominate the rest of the half,..

The second half started much like the first, with St. John’s coming out and outworking the Wildcats. Poor execution against the press and some missed corner threes helped St. John’s dictate the goings and cut the lead to single digits. Villanova would regain control and stretch the lead back to double digits at the under-12 timeout via the three point shot.

Five @BIGEASTMBB squads ranked in Top 26! All current teams are in Top 77!

Figueroa made seven threes on a career day where he finished with 28 points. A few daggers in the second half helped shut DePaul down and keep the Wintrust crowd silent. When DePaul got within a couple of points late in the second half, Figueroa hit a corner 3-pointer that put his team back up eight and effectively ended any comeback hopes for the Blue Demons.

The change from game one to game two of the series was apparent for St. John’s. For DePaul, on the other hand, it was the same story of poor free-throw shooting and an inability to defend the 3-point shot…

Villanova and Georgetown next at MSG back-to-back. #SJUBB

St. John’s found themselves up 13 on a ranked Seton Hall team at Madison Square Garden at halftime, and up 14 points with 17:36 to go. A 14-2 run by the Pirates flipped that on its head pretty quickly, and even though it was tied with 81 seconds to go, the Red Storm left their part-time home with an 82-79 loss. That’s two of the three teams in the Big East that are currently ranked in the top 15 of the Associated Press top 25, and the only Big East squads in the top 15 in KenPom’s rankings…

LJ Figueroa and Mustapha Heron combined for 11 of a season-high 13 triples in a road win at DePaul on Saturday ⛈️ #SJUBB | #WeAreNewYorksTeam pic.twitter.com/Eik4Kf3vZy

Fortunately, the Hoyas dispelled any doubt early against the Red Storm, building a 29-point first-half lead and coasting through the second half to an easy 87-66 win. Mac McClung led all scorers with 24 points, headlining a Georgetown starting lineup that all reached double figures.

And the Hoya defense that had been dissected by slashing guards over the previous week enjoyed a reprieve against the conference’s worst offense, holding St. John’s to just 35 percent shooting and a frigid 6 of 25 from deep.

Only three days until the Johnnies host Georgetown at The Mecca ️

Be wary of betting against St. John’s. Vegas hasn’t typically given the Red Storm enough credit, and they’re 13-6-2 against the spread. They’ve helped themselves by keeping games close at home against quality opponents, but the market is finally responding and this number isn’t big enough… St. John’s is reliant on turnovers, speeding opponents up and hoping tired legs will lead to missed 3s.

HOYA JINXA: What Did Georgetown Do to Deserve This? Hoyas fans try to answer the question posed in Kente Korner. https://t.co/AwmgO8Adnk pic.twitter.com/anKastwSzB