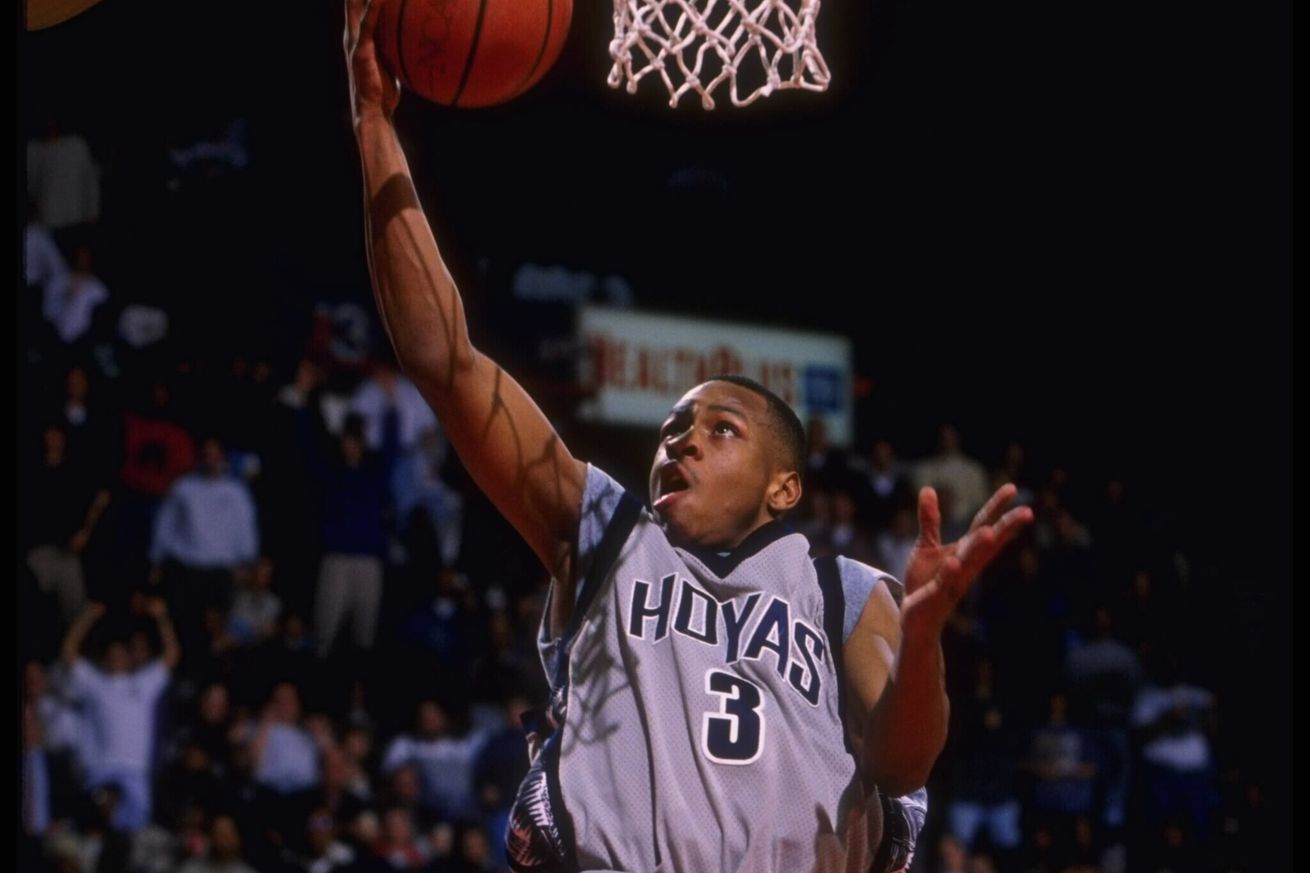 While there has not been a whole lot of news for the Georgetown Hoyas, a few articles on and interviews with some of our favorite sons came out recently, including a couple pieces about one superstar who turned 45 on Sunday and an IG chat with one of GU’s best backcourts—guys who may be volunteering to be the next alumnus to join Ewing’s staff?

In the broader college basketball world, there has been speculation that, with the NCAA announcing sanctions for Oklahoma State and potentially more, some commitments may be released. Perhaps some recruits may be looking at schools formerly in their “top 6” or “final 5.” The Hoyas have 8 new players taking all the available scholarships, so we won’t speculate if any more transitions are coming yet, but rosters in college hoops appear to be pretty fluid right now.

Here are the links:

“I Never Showed Any Weakness”: How Allen Iverson Fought Racism and Jail Time to Become an NBA Great – EssentiallySports | ESSENTIALLYSPORTS

“I had to use the whole jail situation as something positive,” Iverson said, as per Mike Sielski of ESPN. “Going to jail, someone sees something weak in you, they’ll exploit it. I never showed any weakness. I just kept going strong until I came out.” Coming back from jail, Iverson perfectly identified his strengths and never stopped working on them. The 11-time All-Star entered the Kenner League after his release from jail.

I make AI video every year for @theofficialai3 ‘s birthday. It’s 7th June now in my local time. Tell me if you love this video! #iversonvideos #pennyccw #happybirthday

This was about the kid from Hampton, Virginia. The six-foot guard from Georgetown that grew up idolizing His Airness, but also told a coach back in high school that he was good enough to take him.

“I remember the first time I played against him,” Iverson said in his Hall of Fame speech. “I walked out on the court and I looked at him, and for the first time in my life a human being didn’t look real to me.”

Most would say that the era you played in was when Big East basketball was at its’ height. But with the conference making a name for itself yet again, do you still watch and support Big East hoops?

SWEETNEY: “Oh yeah for sure, I watch Georgetown. Villanova’s still there. Seton Hall’s still there. There’s a couple schools still there so I still definitely support it and I want Georgetown to do well obviously. For me, I just miss the Syracuse-Georgetown rivalry twice a year, hopefully meeting in the Big East Tournament. But I think it definitely is still a good league.”

Hi. I put together a bunch of links from me and colleagues with @TheAthletic and @TheAthleticDC. Mostly football stuff, but a mix. Thanks as always for reading and subscribing. For real. https://t.co/IHgY0LsuPL

O’Neil: Bad news for Oklahoma State is worse for others… | THEATHLETIC

Of course, there are other guys in this case, and odds are they aren’t going to come out of this looking a whole lot better. Oklahoma State is the guinea pig, the first school to meet its NCAA maker in the wake of the FBI investigation into college basketball. Although Parkinson, whose day job is as director of enforcement for the Federal Energy Regulatory Commission, cautioned not to read too much into any one decision, it’s impossible not to.

Kansas Louisville, N.C. State, Arizona, Auburn, USC, South Carolina, LSU and Creighton are all in various stages of the NCAA process, and anyone who reads Oklahoma State’s penalties and comes away thinking their school is safe needs to check the tint on their glasses.

In talking with TJ Berger recently, didn’t get the sense that Georgetown was in the picture for Warley.

How much did Memphis basketball coach Penny Hardaway report in outside income for fiscal year 2019? | COMMERCIALAPPEAL

In June 2018, Memphis agreed to a five-year extension worth $11.25 million that will keep Nike as the university’s exclusive shoe and apparel provider for all sports teams through the 2022-23 season. The school’s apparel deal is separate from Hardaway’s individual sponsorship agreement with Nike. Nike has paid Michigan State coach Tom Izzo $400,000 annually since 2010 to endorse its products. North Carolina coach Roy Williams earned $260,000 last year, per a 10-year personal appearances agreement. Georgetown coach Patrick Ewing has his own shoe line through his company, Ewing Athletics. Ewing’s financials are not made public because Georgetown is a private institution.

McClung at Texas Tech will make for a fascinating experiment | EVERYTHINGLUBBOCK

A lot of those issues come from McClung’s shot selection, as he took tons of difficult one-on-one shots. While he made some, he missed many. Part of that was a product of the Georgetown teams he played for. Point guard James Akinjo left the program early in the season, leaving the Hoyas’ offense somewhat rudderless. They had few options outside of McClung, so defenses could focus in on shutting him down. At Texas Tech, Chris Beard will surely surround him with more talent than that, allowing him to pick his spots.

“Just from the player standpoint, I’m not going to allow any player to get screwed in this process. That’s not going to happen,” said coach Boynton. “Any player who stays with our program, will do it with their eyes wide open as to what exactly is going on. They’ll understand that there’s a risk involved, for instance, a lot of talk has been about Cade. I’ve also got a grad transfer committed and signed to come to our university, so it would in a sense be his only opportunity to play college basketball, his last opportunity. So, those conversations will be real and thorough and I’m going to make sure we guide them and help them make the best decision. And if it’s the case they want to be at Oklahoma State, then we’re going to support that as well, but we’re not going to screw these kids over again after what has already happened.”

This morning, June 5, he announced he would be delaying his commitment to a later point saying “it’s bigger than basketball what’s going on right now. We are to wait until things calm down a little bit” in reference to the murder of George Floyd and the resulting protests that have happened nationwide over the last week.

Coincidentally, famed ESPN announcer Dick Vitale tweeted the night of June 3 that LSU had received their notice of allegations from the NCAA, before LSU’s senior athletic director openly denied it. Vitale then backpedaled and said the NCAA has an open inquiry on LSU football as well and their NOA will arrive soon, which is no secret at this point. Oklahoma State men’s basketball was just hit with massive penalties this afternoon: 2021 postseason ban, $10,000 fine, three-year probation, loss of scholarships, loss of recruiting visits, and a 10 year show cause.

Louisville got their NOA a few weeks ago, and many around college basketball expect LSU and Arizona to be the next schools to receive their NOAs. When LSU gets hit, it’s likely they get similar penalties to what OK State received, and Cisse has said he wants the college experience. It’s hard to have a college experience if they aren’t allowed to participate in the postseason.

On how Georgetown can get back to being on top in DC, specifically:

Freeman – “Get me on stat. I feel like I can help with that.”

Virginia heads west to Anaheim, California, for the Wooden Legacy Classic. The tournament, which takes place on Thanksgiving and Black Friday, features UVa, Georgetown, Kansas and UCLA. It’s a loaded field with historic programs. Kansas ended the 2019-20 season as one of the top teams in college basketball, while UCLA ended the season on a strong surge. Georgetown played well in spurts. The bracket is yet to be set, but UVa will play two of the other three teams in the field. This starts the group of games that give Virginia excellent chances to boost its potential NCAA Tournament seed with marquee nonconference wins.