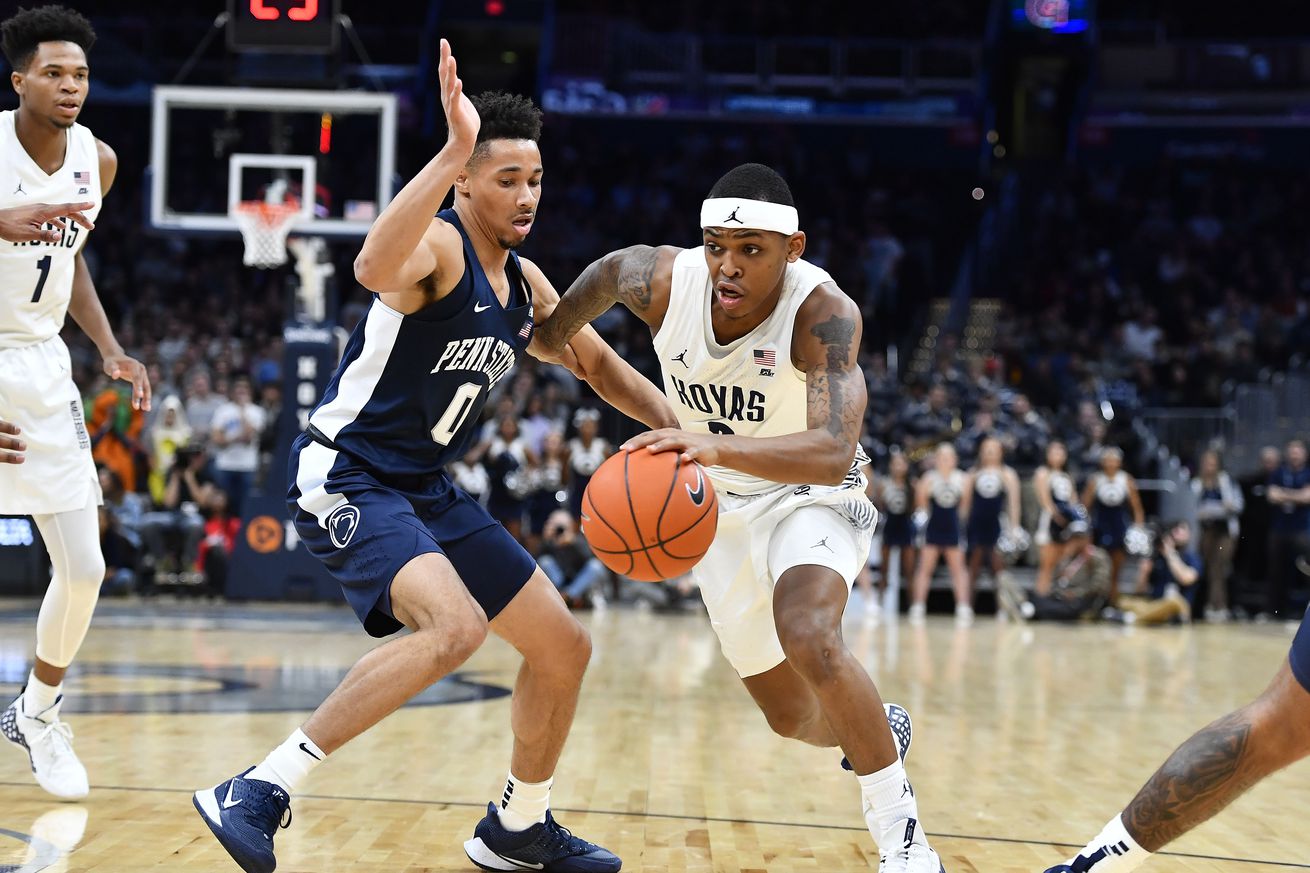 The Georgetown Hoyas had a bad loss to the Penn State Nittany Lions 81-66. There’s plenty of blame to go around, but the coaching staff has admitted that practices weren’t great. Fans see issues with effort, attitude, discipline, and chemistry. Many pundits and arm-chair coaches have made some extreme recommendations to Coach Pat Ewing, as well as some substitution suggestions for his lineup strategies, but less might be more in this case.

Here are six small proposals that could help Ewing and the Hoyas get back on track:

1. Start with lineups that worked in the past

We may only have three data points this year, but last year is not to be forgotten altogether. Georgetown was not handed nine BIG EAST wins last season. James Akinjo, Mac McClung, and Jessie Govan didn’t seem to have many problems sharing the ball when they beat Villanova and Marquette. Josh LeBlanc’s 7.2 rpg and 9.1 ppg during 18 conference games wasn’t due to a lack of “energy and effort.” To diagnose the issues, we might need to recreate last year’s main starters for a significant time.

I feel like many people are forgetting how integral LeBlanc was to last year’s success. Not only is he one of the best power forwards in the conference, he also did the little things. He did his and Govan’s jobs at many times last year. The only reason he should be on the bench is foul trouble (or rule violation). Maybe it’s our fault for not writing about him and taking him for granted. Kenner League style is not kind to his talents.

Nearly every preseason scouting report listed the three All-Freshman Team honorees as the core if Georgetown were to compete for a tournament spot. I’m not sure the analysts’ opinion of the sophomores’ respective talent-levels would change radically after three games. I’d run them together.

If we want to try to bench rest McClung to get him out of his slump, I’m fine. I think it would be better if Ewing let his alleged stud back-court of McClung and Akinjo work though their shooting issues in game #4 against Georgia State this Sunday night. There were plenty of conference coaches who see his talent as highly competitive in the BIG EAST. Alternatively, I don’t think Mosely is aggressive enough to function in 30 minutes of Ewing’s offense.

So let’s start with 30 minutes for James Akinjo, Omer Yurtseven, and Josh LeBlanc, 20+ minutes for McClung and Pickett, and substitute one or two from there until someone gets hot.

1. You played to a dead draw with Josh on the floor (which was 20 minutes). 2. The Blair minutes went as expected. pic.twitter.com/6r7jS8TpKE

I’m not about to try and fix Georgetown’s defense today but improving hand-position seems so simple. We see the hands at their sides too often. It certainly could have an immediate effect to quicken close-outs on the perimeter. I’m not going to say the Hoyas need to trap on every screen or switch differently, but if the ball is remotely nearby, putting a hand in someone’s face can make a difference. It also might lead to more energy and readiness.

The length lineup did a decent job with active hands during the press on Thursday night, but they of course have other issues.

Also, on rebounds, if a player’s hands aren’t on an opponent while boxing out, they need to be ready to catch the ball. Too many times we saw people surprised they had to move their hands from their sides to catch. The extra moment could mean a weak grasp or missed opportunity, Omer.

It seems weird that screens are so effective against Georgetown yet Ewing and the Hoyas barely utilize picks on offense. Not only do screens get space, they create mismatches from the switches. Mismatches aren’t just in size, they can be with speed.

McClung’s good first step doesn’t seem as springy so far, so maybe he can try not driving to the away-side of the pick once or twice; likewise with James Akinjo as he barrels into a clogged lane, head down. A high ball screen is a staple of college and NBA offenses and yet the Hoyas perform them perfunctorily and lackadaisically. Pickett barely plants before he rolls to his happy spot on the perimeter.

Yurtseven had been known for his pick-and-roll (or pick-and-pop) at N.C. State. Ewing has buried Omer in the low post most possessions. I’m not saying he needs to roam the arc, but spread the floor, set a screen and pop for a three (or roll to the hoop) from time to time. We’ve previously seen that having Govan screen out on the perimeter and LeBlanc down low can lead to a crowded hoop area, but there’s no reason to abandon this Basic basketball pillar without trying it. Again, perhaps this play got lost in the urgency on Thursday, but being down five or six after two big dunks coming out of halftime seemed like a good time to consider trying it.

Moreover, when one sophomore guard is bringing the ball down, the other should take advantage of off-ball screens to get open. But maybe that requires one of them passing to the other for once and that might be too much to ask (yeah, I said it).

The press generated a bunch of turnovers, and infused a dose of energy and effort, but it hardly looked ready for prime-time. The Hoyas caught Penn State off-guard by switching to the press but when PSU beat them with good ball movement or a lob, the finish was a high-percentage shot. That’s the risk of a press, but I’m not sure the turnovers the Hoyas generated were worth prolonged use.

More importantly, Georgetown’s lineup that can actually press decently has difficulty handling the ball and scoring on the other end. Again, maybe a lineup that uses LeBlanc can take the best of the defense while keeping the offensive heavyweights on the floor.

Ewing likely wants to use the press sparingly and tactically. A team that doesn’t stink of desperation in a 25-7 game may not have to press the panic button that early or often.

It’s very likely that the original gameplan was to run some pro-sets at various points. Maybe that’s optimistic.

In the prior two years, Ewing’s offensive sets have been praised for strategy and execution. I haven’t noticed more than a couple offensive plays in three games. They are typically designed to create space for drivers and shooters. Alleninxis has detailed Ewing’s use of Iverson cuts, Horns sets, and Stagger screens—that was in Ewing’s first year. Georgetown can easily return some semblance of discipline on one end of the court by setting up sometimes.

I don’t remember a Georgetown shot Thursday night that wasn’t heavily contested. There’s no reason to think these sets won’t work to get open space for struggling shooters. These are sets and plays used in the NBA every night—it’s not like opponents got game tape and Ewing’s secret formula is out. Moreover, it’s a selling point to recruits when a coach can tell you it’s a play run everywhere in the NBA.

6. Less focus on the center position

Yurtseven may be a special talent, and we’ve seen a lot of positives out of him in three double-double games, but he is not Patrick Ewing reincarnated. Ewing can’t ask this much of him. Specifically, Ewing needs to learn from Govan’s limitations last season and understand that Yurtseven can’t carry the scoring load and still defend the way this team needs him to. He is very athletic and has a nice shot. His post moves are solid. He doesn’t need to be the focal point every trip down.

Offensively, to get himself and Georgetown to the next level, Yurtseven needs to improve how he handles a double-team. There’s plenty more coming if the Hoyas’ main play is a bounce pass to the low post.

I think there are other scoring options after Yurtseven gets his 19 per night, especially if we are swapping two-point field goal attempts for three-point shots from guards. Moreover, Wahab’s minutes seem to invoke similar post-feed plays. Georgetown turns the ball over too often when constantly forcing it into the post. This goes back to “setting screens” and “running plays” above, but the strategy should be to take what the defense give you. Moving Yurtseven with screens can give the guards more room to work.

There will undoubtedly be possessions where the big guy needs a touch before anyone shoots it—especially when trying to get opponents in foul trouble—but it’s not just every play that he’s on the floor. There are easier buckets available in this game, and it keeps the defense honest.

Overall, there’s no reason this team can’t quickly bounce back to at least last year’s level. The sloppiness of the final 35 minutes against Penn State can be interpreted as a prolonged reaction to a horrible first 5 minutes. It’s not like Ewing’s Hoyas haven’t had horrible losses stemming from slow starts before.

Still, if what we saw on Thursday is believed to be a better comeback attempt than how Georgetown handled massive gut-punches by DePaul and Seton Hall last season (complicated by 5+ new faces and related lineup chemistry issues) then maybe there are positives to be gleaned from the fight. Maybe a lesser Georgetown team rolls over in the first half? The problem is that no one believes Penn State is that good.

On Sunday, the goal should be an energetic start. Win the first 5 minutes and get a rhythm. Bigger changes might be around the corner, but Ewing can implement some or all these simple suggestions in order to re-focus this team. Ultimately, leadership and accountability will be the keys to never repeating this performance again.

Hopefully the Hoyas jump to a lead on Sunday and get the requisite flexibility to break through a couple shooting slumps.