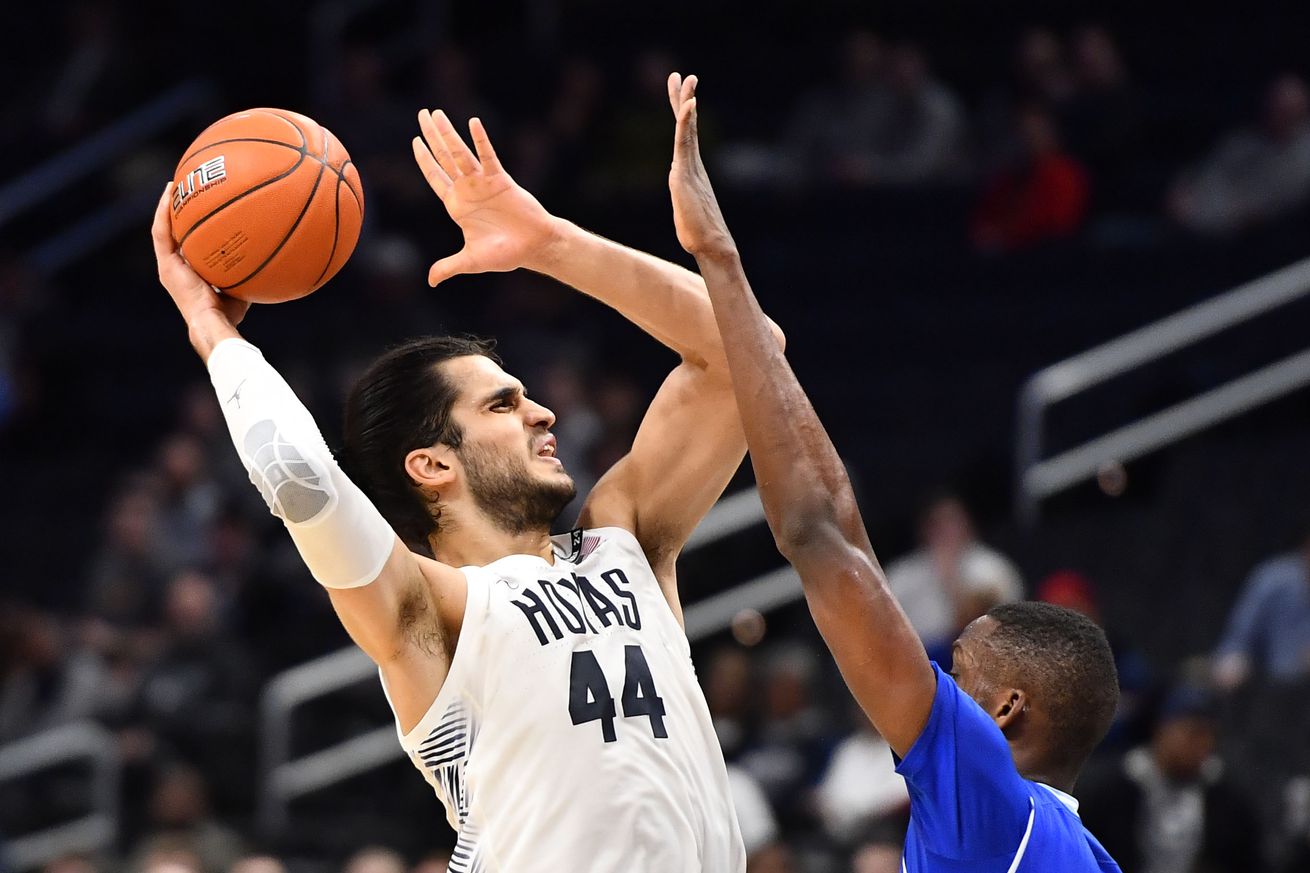 Your Georgetown Hoyas nearly clawed their way back from a startling early deficit, but ultimately dropped to #12 Seton Hall University by a score of 78-71. Omer Yurtseven tallied an extremely subtle double-double, leading all Georgetown scorers with 19 points and 15 rebounds. Jahvon Blair had 18 points, including his 9-of-9 shooting from the stripe; Terrell Allen was also in double digits. Jagan Mosely complemented his 9 points with 6 assisists, while Jamorko Pickett had 9 points and 10 rebounds.

The hometown team was even more shorthanded than usual, as Mac McClung is day-to-day with a foot injury sustained during practice last weekend, an issue that also kept him out of Georgetown’s most recent game, a last-second victory over the St. John’s Red Storm at the Garden on Sunday. This left the Hoyas with a six-man rotation, and with general fatigue and wear & tear a legitimate concern; Blair and Jagan Mosely played the entirety of the last game, and their teammates were not far behind.

The only pregame wildcard for the Pirates was Quincy McKnight, whose knee appeared to do unusual and frightening things during SHU’s weekend loss to Xavier. However, an MRI indicated no structural damage, and (as the Hoyas experienced firsthand) his performance did not suffer.

Those of us tuning in via FS1 missed the early minutes of the game, which featured three straight triples from Seton Hall, punctuated by an early timeout from Coach Patrick Ewing. Watching next-gen Arcidiacono battle back against Butler was only marginally less painful than watching the Hoyas’ deficit spiral to 16-0. Georgetown started 0-7 from the field, finally getting on the board with a layup from Blair. He would also score the Hoyas next points, collecting a Pickett miss and getting fouled while shooting from beyond the arc.

Myles Powell started doing Myles Powell things early in the night, getting an unlikely layup to drop and showing that it was going to long night for the Hoyas. Pickett answered that with a spin move of his own, showing uncharacteristic and welcome assertiveness in the paint. A possession with multiple offensive rebounds culminated in Allen driving and drawing two defenders, then passing it off to Pickett, who drew the foul and converted. Georgetown was scraping together enough defensive stops and second chance points to start digging out of their hole, getting it back to 18-9.

Heading into the under-12 media break, the crowd at Capital One Arena could be heard chanting, “We Want Moncrieffe!” Matthew Alexander-Moncrieffe was visiting campus, along with fellow recruit Michael Best Jr. and recent Hoyas commit Tyler Beard. Now that the crowd had recovered their composure after being stunned into silence by the early barrage, they offered this raucous welcome.

The two teams traded baskets. Every time Georgetown would string together a short run and multiple defensive stops, the Pirates would answer with a run of their own and Romaro Gill would block another shot. The Hoyas were able to capitalize when Powell and the SHU first string went to the bench for a breather, the ball flying between Allen, Mosely and Pickett, who buried a three off the fast-break. Georgetown stuck thanks to freethrows, second chance points, and a sequence during which Terrell Allen scored 11 consecutive points for the Hoyas. It was briefly 36-30, a two possession game, with 2:32 remaining in the first half. An untimely Georgetown turnover led to one basket for the Pirates, and a slick rebound by Jared Rhoden (who had a great defensive game for SHU) facilitated another; suddenly the Hoyas were back down by a dozen. Qudus Wahab did manage to nab another basket for Georgetown before the break, but they still went into halftime down by double-digits.

The second half proved how much tenacity this core group has. Both teams missed their first few attempts, until Allen split a screen and found Yurtseven for the dunk. Off the assist from Blair, Mosely executed a beautiful shot fake and buried a three as Rhoden went flying past. Shavar Reynolds gave the ball back to the Hoyas with an ill-timed turnover, and Blair capitalized, driving directly at Powell to get both the basket and the foul. It was a one possession game, 43-40 with just under 18 minutes remaining.

The Pirates immediately answered with a run of their own, ignited by a three from — who else? — Myles Powell. During a 5+ minute period where Georgetown only managed a single field goal, Seton Hall’s lead ballooned back to (low) double digits. This cycle would repeat itself for the balance of the contest. Two more times the Hoyas would fight for baskets, fight for defensive stops, and fight their way back to within 4 points. They could get no closer, but their effort never waned. It was exhausting to watch, yet incredibly admirable to see their commitment to playing a full game.

It’s a short turnaround this week, with the Hoyas hosting DePaul at Capital One Arena this Saturday, February 8th for a noon tipoff. This will be the first meeting between the two teams this season, and it is extremely important for the Hoyas to get those home victories in the BIG EAST.

Casual Bonus Content: Greg Malinowski was back on the court today, shooting buckets for books to help out a fellow Hoya. He has gone for the bleached blonde look, and is pairing that with some facial hair choices.

Greg Malinowski was back in Capital One shooting 3’s! And sporting a slightly different look… #HoyaSaxa #WeAreGeorgetown pic.twitter.com/2vsoYkqOlo