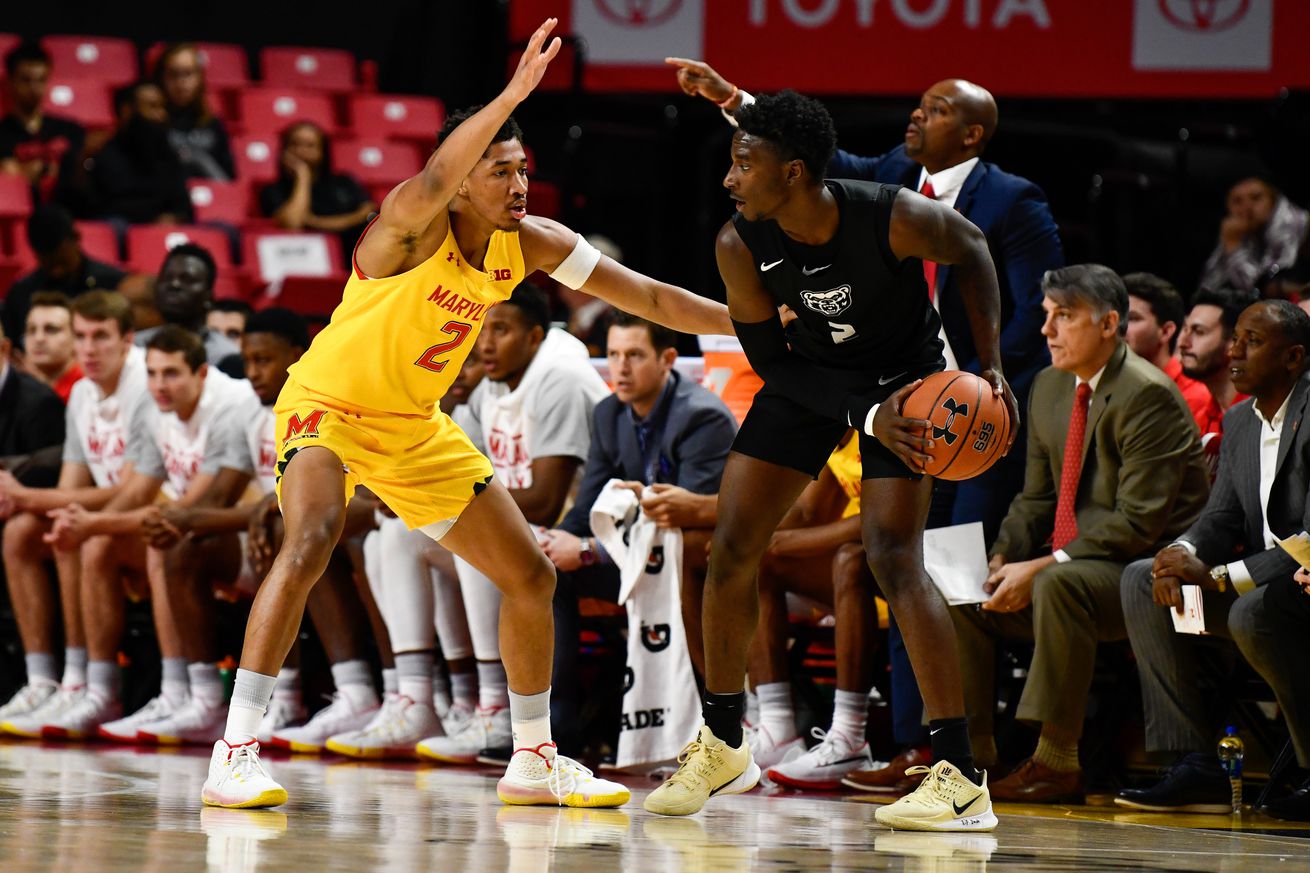 The sophomore is the first Terp to record three steals in three straight games in nearly 15 years.

With 8:44 remaining in the second half against Oakland, then-No. 7 Maryland men’s basketball was up 63-37. But Aaron Wiggins wasn’t slowing down anytime soon.

Teaming with Ricky Lindo Jr. to pressure Golden Grizzly guard CJ Gettelfinger at half court, Wiggins pounced and poked the ball out of his opposition’s reach. He then sprinted towards the hole as freshman Hakim Hart picked up the loose ball and sent a pass his way. The sophomore leapt into the air and thundered home a slam dunk to make Xfinity Center erupt in awe.

The steal was one of three for Wiggins in the 80-50 victory, and second in less than a minute, marking his third consecutive performance with three takeaways after only averaging 0.8 steals last season. The last Terp to do so was D.J. Strawberry in December 2004.

“Aaron’s a hard worker. He’s always been somebody that embraces defense, it’s just something that he had to learn,” Darryl Morsell said. “Through his freshman year, he learned how important defense was, and in the offseason, that’s something that he really focused on. He’s definitely stepped it up this year defensively.”

He had a pretty impressive season off the bench last year, averaging 8.3 points and 3.3 rebounds per game while making the second-most threes for a freshman in program history at a 41.3 percent clip, but Wiggins lacked the confidence to be aggressive on both the offensive and defensive end.

So when Turgeon sat down with him in April after the season ended, he had to be blunt to get the best out of the talent in front of his eyes — “Aaron, if you play like you did as a freshman or sophomore, that we’re not gonna get any better,” he said.

After that, Turgeon said he put in more hours than anyone on the team over the summer, working out four times a day for at least four out of seven days of the week.

In the morning, he focused on ball-handling skills before practicing with the rest of the team. After that, Wiggins dedicated himself to the weight room, where he was able to put on nearly 25 pounds from when he first arrived on campus to give himself an advantage in the paint — which has certainly has shown so far this season, whether it be dunks or other moves inside and around the rim.

Wiggins also spent countless hours on the slide board, which is often used by Olympic skiers and speed skaters to improve power, endurance, speed and lateral agility.

”Aaron lived on [the slide board] this summer, and it’s made him so much quicker laterally, and it’s given him confidence on defense,” Turgeon said. “He was good, it’s really helped him. So it gives me more confidence because I know Anthony can really guard and I know Darryl can really guard, and so if he’s going to guard that way, [it] really helps us.”

And to top things off, the Greensboro, North Carolina, native ended his days by getting in some more shooting at night.

While his extra effort over the offseason has certainly helped him perform better so far in 2019-20, former Terp Keith Gatlin, who coached Wiggins at Wesleyan Christian Academy, says he’s always been a defensive talent.

“We pressed a lot in high school and we got after people because we had a lot of long length and athleticism,” Gatlin told Testudo Times. “Aaron is doing the same thing now that he did in high school for me. That’s why it was so painful for me to watch last year, because I was just like, ‘This is not the same guy.’”

Now as an assistant coach for High Point University, it’s hard for Gatlin to find time to watch Maryland’s games live. But Wiggins’ father, Tim, sends him a lot of highlights.

“I’m so excited to finally see him playing the way that I know he can play,” Gatlin said. “I used to tell Aaron all the time when I had him, ‘Just be aggressive,’ because he’s so talented … When he plays aggressive and plays like he has to prove something to someone, the sky’s the limit.”

Gatlin said Wiggins sometimes lacked confidence at the start of high school because he didn’t play on an AAU circuit, where a lot of the top recruits were being spotted. So Wiggins took part in extra training sessions with his coach all the time, whether it was 6:30 a.m. or late at night, often joined by pros such as Dennis Smith Jr.

“I don’t think Aaron realized how good he could be,” Gatlin said. “I used to always tell him, ‘Don’t worry about your offers, because you’re going to get more offers than you can ever imagine.’”

Of course, Wiggins ended up in College Park, playing for the Terps. And now averaging 10.7 points, 6.7 rebounds and three steals through three games in his sophomore season, he is making the difference for the No. 6 team in the country.

And when media asked about his new defensive prowess, Wiggins had one message — that he won’t be letting up any time soon.