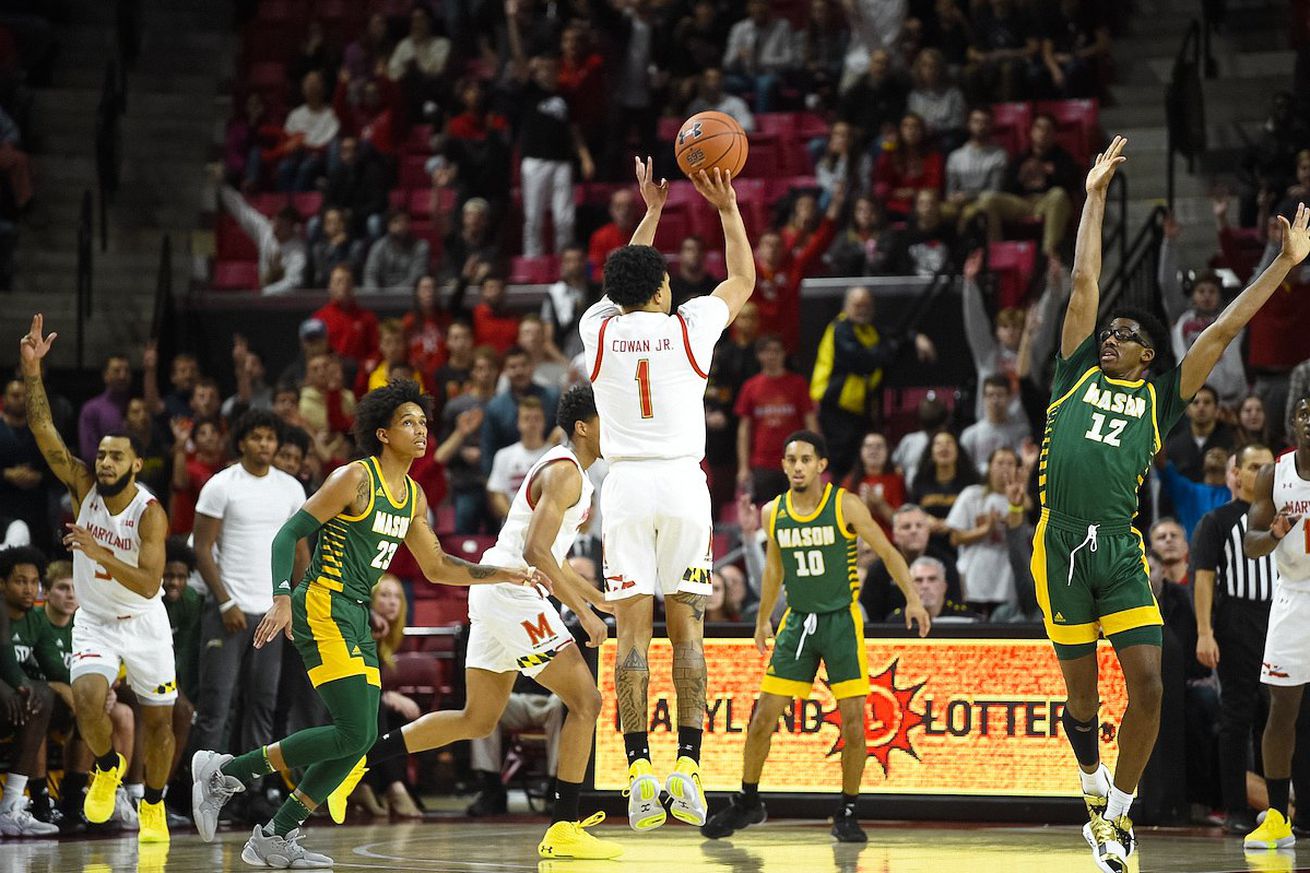 The Terps remain undefeated, while the Patriots suffered their first loss of the season.

After yet another slow start, No. 6 Maryland men’s basketball was down 29-26 to George Mason with less than six minutes left in the first half.

Anthony Cowan Jr. ran the ball up the court after a Patriots’ miss, passing the ball to Aaron Wiggins before finding himself wide open behind the arc. The senior guard nailed the three-pointer from deep, bringing life to the Xfinity Center crowd.

Just over a minute later, Cowan drove to the basket through traffic in the paint, using a pump-fake to secure the and-one score. He waved his arms emphatically in the air after the bucket, making the crowd louder with each motion. The sequence led the Terps to a 14-2 run to end the half en route to an 86-63 win over the Patriots.

“Guys [were] just locking in and playing at a high level,” head coach Mark Turgeon said. “We changed our offense a little bit right before half. We were able to spread them out, and guys were making good decisions.”

The senior had to sit out for a decent chunk of the half due to early foul trouble, but gave Maryland a big spark once back in the action.

Through five games this season, Maryland hasn’t been able to separate itself early, usually taking more than halfway through the first half to establish a lead. The Terps were down by seven points more than halfway through the period at the 9:29 mark in this one and allowed the Patriots to hold a lead for over 10 minutes total before taking back momentum due to Cowan’s play.

But before Maryland’s 14-2 run in large part led by Cowan (19-2 in total) to end the half, the team got some life from an Eric Ayala dunk. The sophomore drew the foul on the dunk attempt and flushed it home. However, after the play, it appeared as if Ayala had some words for George Mason and drew a technical foul — his second of the year involving an athletic dunk.

Maryland maintained a solid lead through the start of the second half, but took some time to truly separate itself from the competition. By the 8:21 mark of the half, the Terps had an 65-49 lead, in large part to the play of freshman Makhi Mitchell.

“It just shows his toughness. It shows regardless of what’s going on, he’s locked in and he wants to play, he wants to win,” Wiggins said. “I told him when he came out, ‘Great minutes, great energy.’ Like he set the tone. He drew fouls, he grabbed every rebound, so his presence made a big difference in the game as well.”

Turgeon said he would have kept the freshman in even longer, but Mitchell gave him the signal that he was getting worn out.

The team never looked back from that point on, eventually ending with a 23-point victory to keep its undefeated streak.

Still, both teams struggled from the floor in the final period of play, with the Terps shooting 35 percent — including a measly 2-of-10 performance from beyond the arc — while George Mason went 27 percent in the half.

“Turgeon emphasized defense at halftime,” Wiggins said. “He mentioned playing better defensively, contesting shots, running them off the line and not allowing them to have near as good of a second half shooting-wise.”

1. Maryland has slowed down its fast break dominance. The Terps only had five fast break points Friday night against George Mason, slowed down by a team that ranks 314th in the nation in adjusted tempo. The Terps had eight the game before that.

Through the first three games this season, it looked like Turgeon finally had a team that could dominate at a fast pace, averaging 25.33 fast break points per contest. But since then, it’s certainly been less of a factor.

“That’s huge,” Cowan said. “As someone who’s just been a Maryland fan for so long, who now has his name up there with so many great players — it’s definitely a blessing.”

3. Jalen Smith gets his third double-double of the year. With Bruno Fernando now in the NBA, Smith has transitioned into Maryland’s full-time center. While there were some concerns about his ability to bang down low due to a lanky physique, Smith has certainly filled Fernando’s shoes without a hitch to start the season.

Against the Patriots, he posted his third double-double of the year, scoring 12 points — on just five field goals — with 10 rebounds. As a freshman, Smith had just five double-doubles, and he’s on pace to shatter that mark thus far.