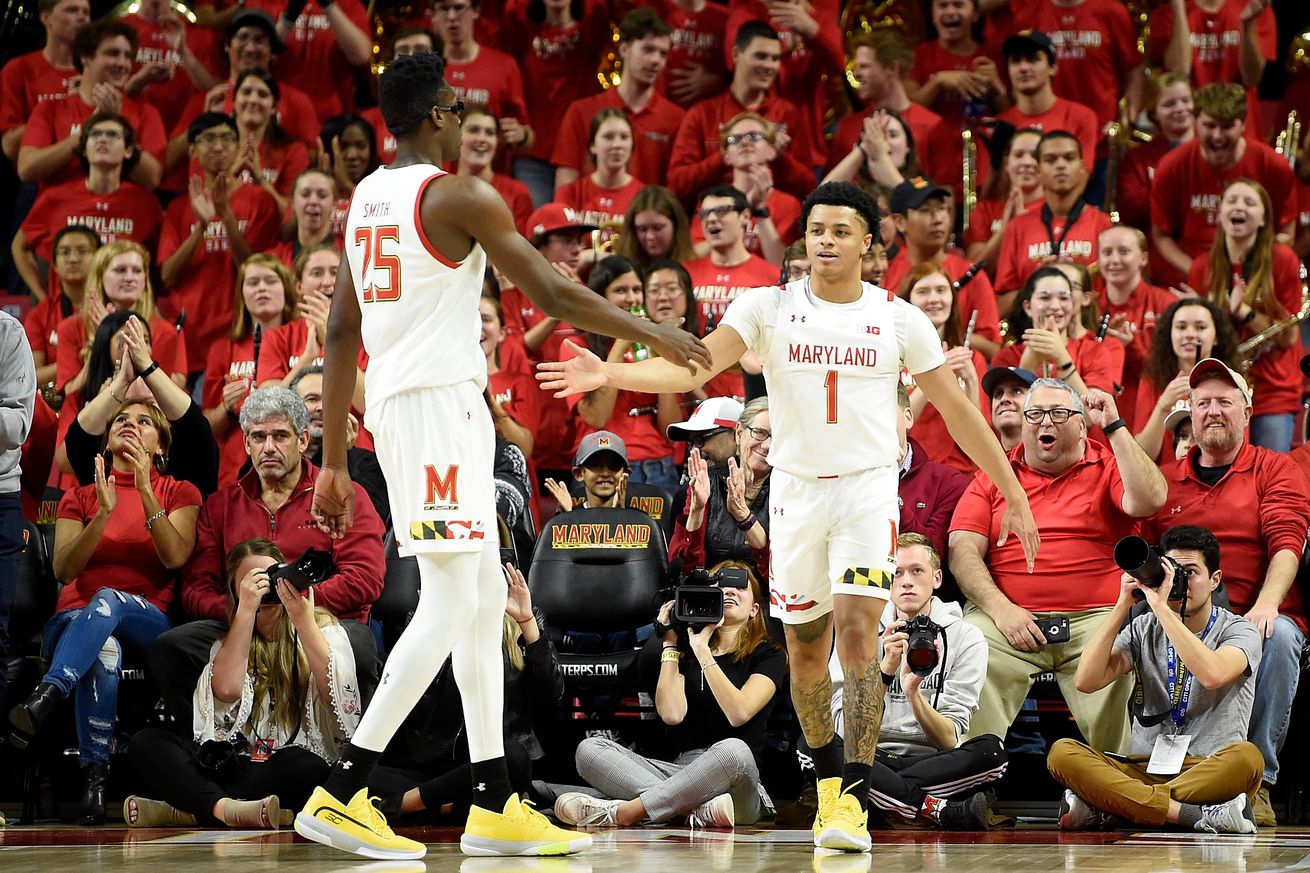 There were only three college basketball programs with multiple players named to John R. Wooden Award 2019-20 Men’s Late Season Top 20 Watch List Monday, and Maryland was one of them.

Senior guard Anthony Cowan Jr. and sophomore forward Jalen Smith both earned a spot on the prestigious list to represent the Terps. Cowan, who also was named the Big Ten Player of the Week Monday, was on the top-50 preseason and top-25 midseason watch lists, while Smith appeared for the first time this week.

The duo has led Maryland all season, especially as of late.

Smith has put up 12 double-doubles this season, which ranks eighth in the nation. While he’s averaging 15.3 points and 9.8 rebounds on the season, the Baltimore native has averaged a stellar 21.3 points, 11.0 rebounds and 2.4 blocks over his last five games. And he leads the Big Ten with a 53 percent three-point shooting clip in conference play.

Maryland women’s basketball guard Kaila Charles also received attention from the committee as she was named to the women’s edition of the list Monday. She was named a Preseason AP All-American and has certainly lived up to the hype, averaging 14.6 points and 8.1 assists so far this season.

No. 13 Maryland women’s basketball picked up another win, decimating Michigan State to the tune of a 94-53 blowout.

Maryland men’s basketball continued its rise up the AP Top 25 poll, as Mark Turgeon’s team checked in at No. 9 in the latest rankings.

The Terps will be back in action on Tuesday night against Rutgers. Here’s the preview of the game.

Maryland will likely be led by Anthony Cowan Jr., who was named Big Ten Player of the Week after a dominant performance against Iowa.

Maryland women’s lacrosse — ranked No. 1 in the nation — is set to begin its 2020 campaign on Saturday. Joe has the season preview.

Fan confidence is on the rise for Turgeon and the Terps following yet another win. Check out the latest SB Nation FanPulse Poll.

Remember to send us any questions you have for this week’s mailbag.

Have questions about No. 9 Maryland men’s basketball?

What about No. 13 Maryland women’s basketball? Or any of the spring sports?

We’ll be doing a mailbag this week to answer anything you’ve got. Reply to this post, DM us, or email us at TestudoTimes@gmail.com.

Maryland is going with the all-white uniforms Tuesday against Rutgers.

Kevin Huerter had himself a game against the Boston Celtics, including this jam. The former Terp finished with 23 points, two assists and three rebounds.

This three is just flames pic.twitter.com/egXGVffX9D

A day after Anthony McFarland Jr. announced his invitation to the NFL Combine, fellow running back Javon Leake did the same.

I told my momma be patient, watch me go get it see you in Indy

Ferrell Edmunds was selected in the third round of the 1988 NFL Draft. He was a two-time Pro Bowl selection and currently has three sons playing in the NFL. #BlackHistoryMonth pic.twitter.com/lmHSHFLNE0

Maryland women’s basketball moved up to No. 13 in the AP Top 25 Monday.

Maryland women’s basketball makes a big jump this week — rising four spots to No. 13 in the AP Poll.

Brenda Frese’s squad is currently projected for a No. 2-seed in the NCAA Tournament.

Maryland women’s basketball finds itself in a favorable spot during the first NCAA Selection Committee Ranking ahead of the 2020 NCAA Tournament.

The Terps come in as the No. 8 team — good for a two-seed — despite having four losses, as each came against a team in this top 16. https://t.co/4BO52ZEQcE

It only took Roman Puglise eight seconds to score the first goal of the season for No. 4 Maryland men’s lacrosse.

Roman bagged the first goal of 2020 in just 8⃣ seconds

Jared Bernhardt has announced his intention to play football as a graduate transfer after his senior season, but he’s generating some buzz around the Premier Lacrosse League. https://t.co/sYtFU6dP6b

Keep an eye out for season two of Thumbs Up! Tuesday.