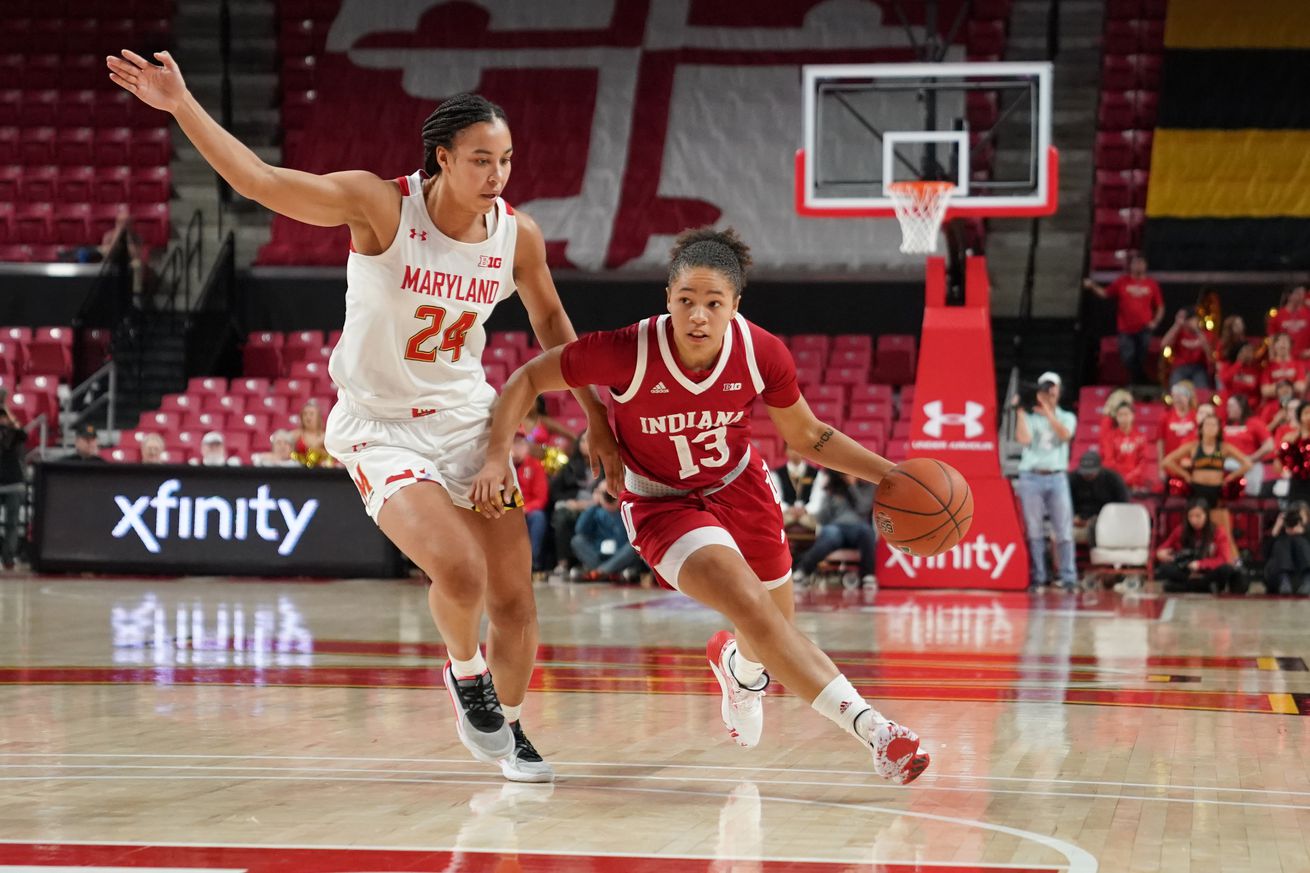 The Terps take their seven-game win streak on the road in Bloomington.

No. 13 Maryland women’s basketball is looking to prove it’s back to being a real threat, and the next biggest test comes on the road Thursday against No. 18 Indiana.

The Hoosiers are the second-highest ranked team in the Big Ten behind the Terps, who are tied with Northwestern and Iowa, and are a tough team — despite Maryland pulling out a win in College Park last month.

Maryland has struggled on the road this season — posting a 5-3 record — and will need to prove it can contend away from the friendly confines of Xfinity Center in order to earn a good NCAA Tournament seeding position.

“Everyone is a great team,” Maryland head coach Brenda Frese said of the Big Ten this season. “Then, you add the element of going to a tougher environment in [Bloomington], so it’s going to take a complete 40-minute game for us.”

Tipoff between the two teams is set for 8 p.m. ET and will be broadcasted on the Big Ten Network, which can be streamed on FoxSportsGo.

On Jan. 20, then-No. 20 Maryland women’s basketball was looking for a way to prove its ability after a rough stretch to open the conference schedule.

The Terps came out at home with confidence and gave a consistent effort, en route to a 76-62 win.

Sophomore center Shakira Austin led all scorers with 22 points, which kind of overshadowed key contributions from Taylor Mikesell. The sophomore scored 16 points, but was also a dominant force with eight assists — a career-high.

Maryland surrendered 21 points to sophomore guard Grace Berger and will have to key in on her this time around to avoid a close game.

What has happened since

Maryland’s win over the Hoosiers marked the team’s third win in a row, and it has kept rolling since.

The Terps’ win streak is now up to seven, which included a top-25 victory over then-No. 22 Northwestern and a 41-point victory against Michigan State, with matchups against No. 18 Indiana, Rutgers and No. 19 Iowa over the next three contests. Continuing to win, especially against tough competition, will be critical with seven games remaining on the regular season slate.

“Everyone is starting to gel together,” Frese said. “Our defense has been ahead of our offense all season, but it’s really clicking on the offensive end where they’re sharing the basketball and just making easy plays for each other.”

For Indiana, the loss to Maryland marked its third loss in a row, but the team has since bounced back.

The Hoosiers have won four consecutive games — mostly coming against teams in the lower half or the Big Ten standings — and will look to capitalize on a home game against the Terps with four of their final six contests coming on the road.

1. Can Ashley Owusu keep rolling? The freshman point guard managed to score 22 points last time out against Michigan State despite dealing with some sickness just a minute into her time on the floor. Her growth and elevated play — whether it comes off the bench or through a start — is instrumental to this team’s success.

“It’s just her being confident,” Kaila Charles said. “Her pushing the ball — no one can stop her especially when she gets a full head of steam — and her finding her teammates. Her last game, she had a career high, but she also had eight assists. She’s playing defense and she’s really helping us. … I just love the fact that she’s playing with more confidence.”

2. Will the Terps have a change in plans against Indiana? Playing teams twice in one season has its pros and cons, with familiarity and personal scouting available after meeting face-to-face. The Hoosiers may have lost by 14 points to the Terps in College Park, but could turn that around and make things even more difficult in Bloomington.

“I would say [it is tougher to play a team a second time],” Owusu said. “They have a better idea what we’ll do and how our team plays, but coach always talks about being 10 points better on the road so we’ll see.”

3. Can Maryland use its hidden depth as an advantage down the stretch? Even though the roster has slowly shrunk down to nine players this season, the Terps still have nine players that can step in and provide top-tier ability on the floor. All seven players who scored against Michigan State had at least six points (With Blair Watson and Sara Vujacic being the lone non-scorers). Having nine players who can give at least 16 minutes of contribution in a conference game is huge, and that can be an advantage come March.

“It’s amazing,” Watson said. “Because you know you can go out and give your all for as many minutes as you possibly can — even if you’re tired somebody’s going to come in right behind you and give just as much effort and energy as you did. It’s kind of nice to know everyone can be relied on.”