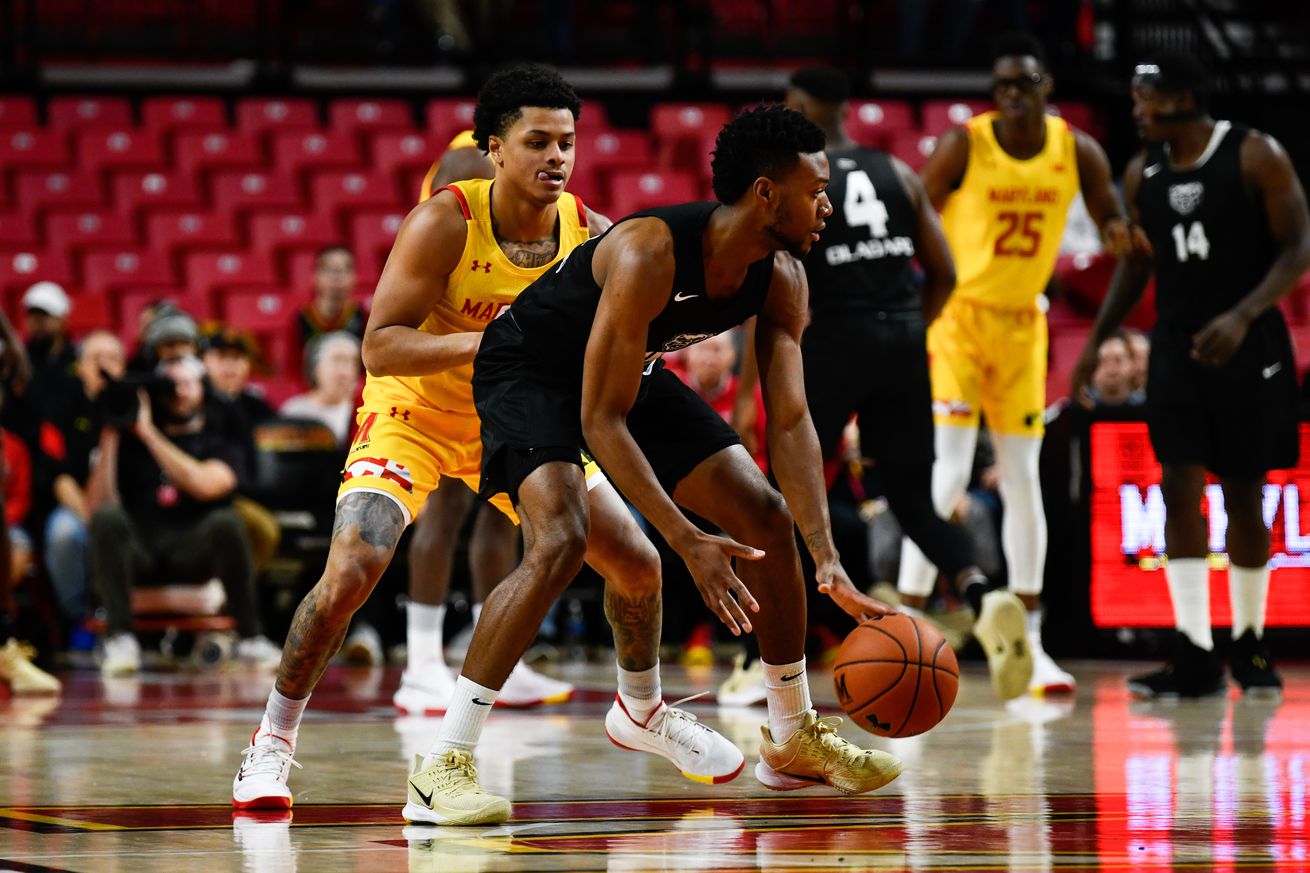 The Terps’ defense is evolving with each game, and opposing offenses are having fits trying to decipher it.

Following a trend that has become quite common with the team, then-No. 6 Maryland men’s basketball found itself in an early hole about 13 minutes into Friday’s game against George Mason.

The Terps, who trailed 23-19 with just under eight minutes to play in the half, needed to make a change in their game plan against an undefeated Patriots team. After a heated Mark Turgeon timeout, Maryland altered its defense, switching from a 1-2-2 zone back into a half court 3-2 zone that assisted in a 20-12 run to end the half.

Although Turgeon has previously resorted to man-to-man defense and rarely wavered from it, this year’s team is capable of implementing more zone defenses due to its length and depth at multiple positions. And he’s taking full advantage.

“I’ve always wanted to change my defenses. Last year we practiced a lot of different [defenses], we couldn’t, we weren’t any good in any of them,” Turgeon said. “We just said ‘All right, we’ve got a young team — five freshman — let’s just get really good at one defense. Now we’ve became really good at our zone as the year went on. … [I’ve] got veteran guys, and actually my young guys are smart, so it allows us to do it.”

Through the first five games, Maryland has noticeably incorporated approximately five different zone variations, including a 1-3-1 and 3-2 zone during half court sets and a 2-2-1 and 1-2-2 full court press. The Terps also occasionally utilize a skeleton of a 1-2-1-1 full court press that emphasizes trapping when teams cross half court.

Against Rhode Island on Nov. 9, Maryland trailed 24-16 until Turgeon elected to go to his 1-3-1 zone with 6’6 guard Aaron Wiggins at the top. During the Rams’ second offensive possession against the Terps’ zone, Wiggins snagged a lazy pass out of the air and scored a layup on the other end to cut the deficit to six points.

“Getting that steal, I just wanted to use my length as much as possible to see if I could effect the guards in any way,” Wiggins said after the game. “And [Turgeon] always wants me to use my length to make sure that I’m making them throw high passes because it slows them down. — they’re not able to get into a set, really.”

Wiggins’ steal was part of another delayed Maryland run that allowed the team to overcome another early deficit and take its second victory of the season.

“Their length in that zone caused us some issues. That was the turning point,” Rhode Island head coach David Cox said after the game. “Once they went zone, our offense took a dive — took a nosedive. And we couldn’t get back into a rhythm.”

Even though the Terps’ rotation is still taking shape through the first five games of season, about 10 to 11 players could see large roles in Turgeon’s lineups — an increase from the eight players that logged the majority of the playing time last year.

“It helps because we got so much depth and like I said we’re so dynamic and athletic, whatever he throws at us, we can go out there and execute it,” Eric Ayala said. “You know, anybody can go out there and come right in and fill those spots and hold it down defensively.”

With an average height of 6’8, Maryland boasts the tallest team in the Big Ten, allowing Turgeon to put that to good use. Through five games this season, the Terps have forced an average of 16 turnovers per game — which is tied for second in the Big Ten behind only Penn State.

“I think this is their deepest team that they just kind of keep coming at you at waves — might be their most talented team. There’s very little drop off when they sub,” Fairfield head coach Jay Young said. “When you can switch one through five and you can switch though the ball screens and guys can play multiple positions, it’s always a good thing. And they’ve got plenty of those guys.”

After picking up a technical foul with exactly 16 minutes remaining against LSU in the second round of the NCAA Tournament last year, Turgeon had Maryland go to a 3-2 zone defense, which energized the Terps’ comeback and held the Tigers to 23 points for the remainder of the game.

Maryland’s 2018-19 season came to an end that day in Jacksonville, but the team’s defensive effort gave Terp fans a glimpse of what they could expect with a deeper team the following year.

“It’s been a long time since I’ve had this many multiple defenses. The guys love it. So if I start putting stuff in and the guys look at me like I’m crazy then I stop,” Turgeon said. “Every time I add something, the guys love it, they get excited so that excites me. And then we get better because of it.”