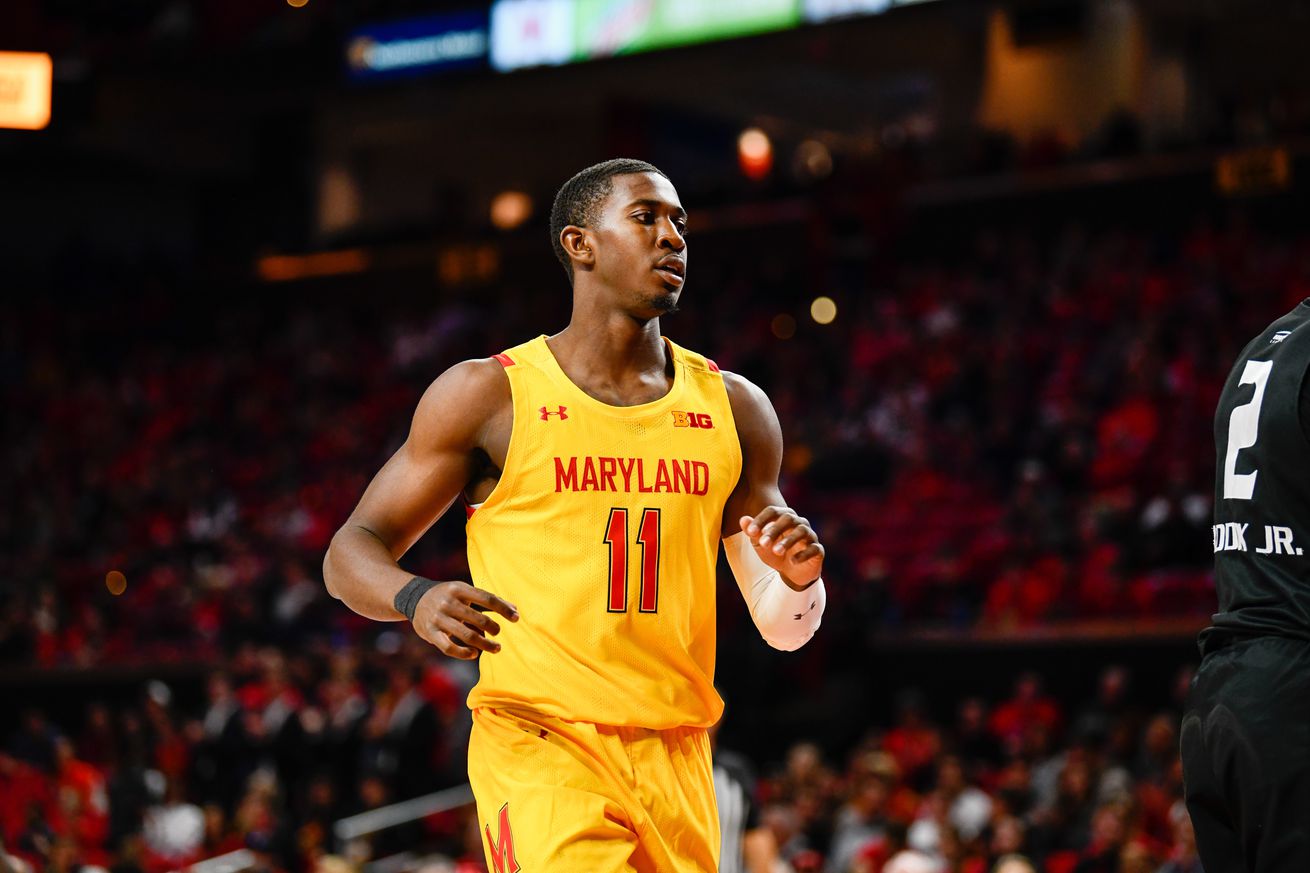 The Terps pulled away late in the first half and blew the Golden Grizzlies out of the water after the break.

With just seconds remaining in the half, No. 7 Maryland men’s basketball had finally woken up for the team’s noon tipoff time against Oakland.

After going on two scoring droughts and turning the ball over nine times, the Terps forced the Golden Grizzlies into an air-balled floater that eventually fell into the hands of guard Darryl Morsell. The junior pushed the ball down court where he found fellow guard Anthony Cowan Jr. The senior captain took one dribble and found teammate Aaron Wiggins in the corner.

Maryland’s three-point threat caught the pass and drained a three as time expired in the half, ending the Terps’ 11-0 run to end the half that pushed them to an 80-50 victory over Oakland.

With its win on Saturday, Maryland begins its season 3-0 for the sixth consecutive year.

Although Wiggins was the one that ended the half for Maryland, the sophomore guard ignited a small spark for team scoring five of the first eight points — three of which came from a three-pointer in same corner that capped off the first half.

The Terps entered halftime with a 13 point lead — the largest that they’ve had this season.

Two times during the first half, Maryland went on scoring droughts that lasted about 2:30 and allowed Oakland to stay in the game. The Terps led for just over 15 minutes of the first half, but their largest leads came at the beginning (5) and end (13) of the half.

“They were ready for us. They had a game plan,” head coach Mark Turgeon said. “We weren’t getting any second shots, so I think once we just kind of got used to the defense — that was really the difference.”

With 6’7 Xavier Hill-Mais and 6’11 Brad Brechting in Oakland’s starting lineup, Oakland resorted to its strength of pounding the ball inside. Fourteen of Oakland’s 22 first half points came within the paint. Hill-Mais, who was the only Golden Grizzly to finish in double figures, had a game-high 18 points.

“He’s in [Xfinity Center] every night getting extra shots up. So I know what he’s capable of,” Wiggins said. “Seeing it pay off today was really exciting, really fun to watch.”

And with the lead that started on that 11-0 run to end the first half well beyond any chance of comeback, Turgeon was able to empty the bench. Hakim Hart, Joshua Tomaic, Will Clark, Travis Valmon and Reese Mona were all on the court to close out the victory.

1. Maryland pushed the tempo. Turgeon has preached that he would like his team to play with a faster pace, and the team has the depth and talent to do so. But three games in and his words are coming to fruition. Against the Golden Grizzlies, the Terps had 30 fast break points, marking the third consecutive game with at least 22 fast break points.

“I kind of told the guys at halftime that we’ve got a lot of athletes on this team,” Morsell said. “Let’s make this a track meet — and we deep too. So if you get tired, we can sub. So that’s kind of what we tried to do in the second half.”

2. Makhi Mitchell got his second consecutive start but struggled with fouls. After making his first career start against Rhode Island a week ago, the freshman got the nod from Turgeon again on Saturday. However, Mitchell only played 1:27 in the first half due to his foul trouble — something that he has struggled with in his first season with the Terps. Mitchell returned around the 10 minute mark of the second half and finished with three points and a rebound.