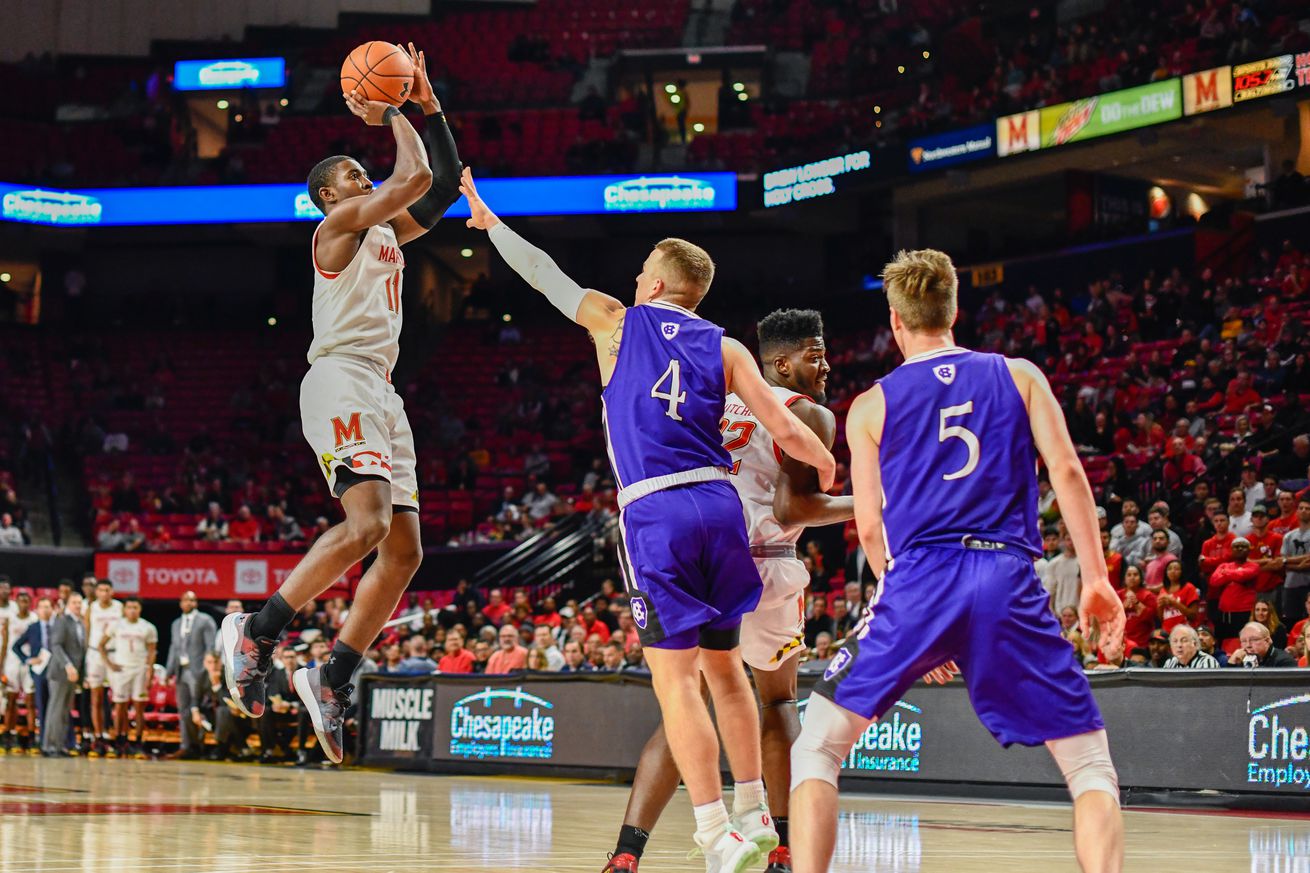 After a week off, the Terps are back in action against a Horizon League opponent.

After earning victories over Holy Cross and Rhode Island, No. 7 Maryland men’s basketball looks to start 3-0 for the sixth consecutive season with a Saturday matchup against Oakland.

The two teams have only faced each other once prior. Ranked No. 15 at the time, Maryland coasted to a 72-56 victory over Oakland in the fifth game of the 2014-15 season.

And though the Golden Grizzlies don’t appear like much of a threat, No. 1 Kentucky’s upset loss to Evansville is a reminder for the Terps to stay on their heels.

“Each time we play, we’ll get used to being the big game for that team in the preseason because you’ve got that number in front of your name,” head coach Mark Turgeon said Friday. “Look what it did for Evansville, right. So everybody wants to be the next Evansville. So you gotta be ready to play, and hopefully our guys will be ready.”

Saturday’s game is scheduled to tip off at 12 p.m. and will air on BTN Plus online.

Head coach Greg Kampe has been at the helm for the Golden Grizzlies for quite some time, now in his 36th season. He has 618 career wins to his name, which ranks 14th among active Division I coaches, as well as third amongst coaches at a single school.

Xavier Hill-Mais, redshirt senior forward, 6’7, 261 lbs, No. 14. Hill-Mais was both the leading scorer and rebounder for Oakland last season and looked to be the team’s best player heading into this year. He averaged 18.3 points and 7.2 rebounds per contest in 2018-19 to be named to the All-Horizon League First Team. The redshirt senior is only averaging 10 points and 6.3 rebounds this season, but with his ridiculous frame, expect him to be a challenge to contain in the paint.

Daniel Oladapo, sophomore forward, 6’7, 220 lbs, No. 4. In just his first season out of junior college, Oladapo leads the Golden Grizzlies in scoring so far, averaging 13.8 points per game while shooting 54.1 percent from the floor. The sophomore is also second on the team with 7.5 rebounds per contest. And after having to battle his way to the Division I level, Oladapo is sure to be eager to prove himself against a top team.

Brad Brechting, redshirt senior center, 6’11, 240 lbs, No. 13. Brechting will be the tallest player the Terps have faced so far this season, which could cause some trouble down low. He is averaging 11.5 points and seven rebounds so far this season, while shooting 63 percent from the field. And he can make free throws well for a big man, currently shooting 80 percent at the line.

Play in the paint. As shown above, the majority of Oakland’s best players are forwards who excel at scoring down low. Each boasts a big build that allows them to bully defenders in the paint, with all three making at least 47 percent of their field goal attempts.

Last season, Bruno Fernando was the go-to guy to defend such talent, and now that task falls to Jalen Smith. After adding significant muscle to his frame and showing his improved ability on the interior in play so far this season, Smith feels up to the task.

“I feel a lot more prepared being able to withstand their hits and just play with their big men [without] getting in foul trouble,” Smith said Friday.

Turnover margin. Oakland has a -.50 turnover margin so far this season, which is the fourth-worst in the Horizon League. That also is tied for 216th among Division I programs, which certainly isn’t great. The Golden Grizzlies are averaging 14 turnovers through four games — something Maryland will look to take advantage of after scoring a combined 46 fast break points through its first two games.

1. Can Maryland get out to a faster start? Though the Terps ended with dominant victories in each of their first two games — a 24-point margin against Holy Cross and a 16-point advantage over Rhode Island — they started horrendously slow.

Oakland isn’t a team that should give Maryland any trouble in the long run, but the Terps need to get in the habit of starting games with more firepower, as that will be crucial as the season goes on.

“We can’t rely on the crowd or anybody outside of our circle to bring our energy,” Aaron Wiggins said Friday. “We gotta be that team that is able to build energy off of each other, comes locked in and just ready to play.”

2. Who starts in the paint with Jalen Smith? The shortest player in Oakland’s starting lineup is 6’3, with another guard at 6’4, two 6’7 forwards and a 6’11 center. Mark Turgeon is still experimenting with his starting five, and it looks like that could be likely to change slightly depending on the opponent.

As one would expect, Turgeon said he was leaning towards playing a bigger lineup against the Golden Grizzlies. But he said he is very unsure about who will get the nod.

“I had my mind made up before practice and sometimes practice dictates what’s going to happen tomorrow, and I won’t know,” Turgeon said Friday. “I’ll be honest with you, I might not know till 11 o’clock tomorrow morning.”

Though Makhi Mitchell didn’t get to play much after starting against Rhode Island due to a lot of early foul trouble, his 6’10 frame makes him the ideal fit to start alongside Smith. Donta Scott, who stands at 6’8, has impressed so far in his freshman campaign, and makes a case as well.

3. Will Anthony Cowan Jr. make his mark on the record books? The senior moved to 21st on Maryland’s all-time scoring list against Rhode Island, scooting past Dez Wells with a 14-point performance. If Cowan can put up at least 14 points again, he’ll jump James Gist into the top-20.

Though the Bowie, Maryland, native is much more concerned with taking his team far this season, doing so would be a major accomplishment.