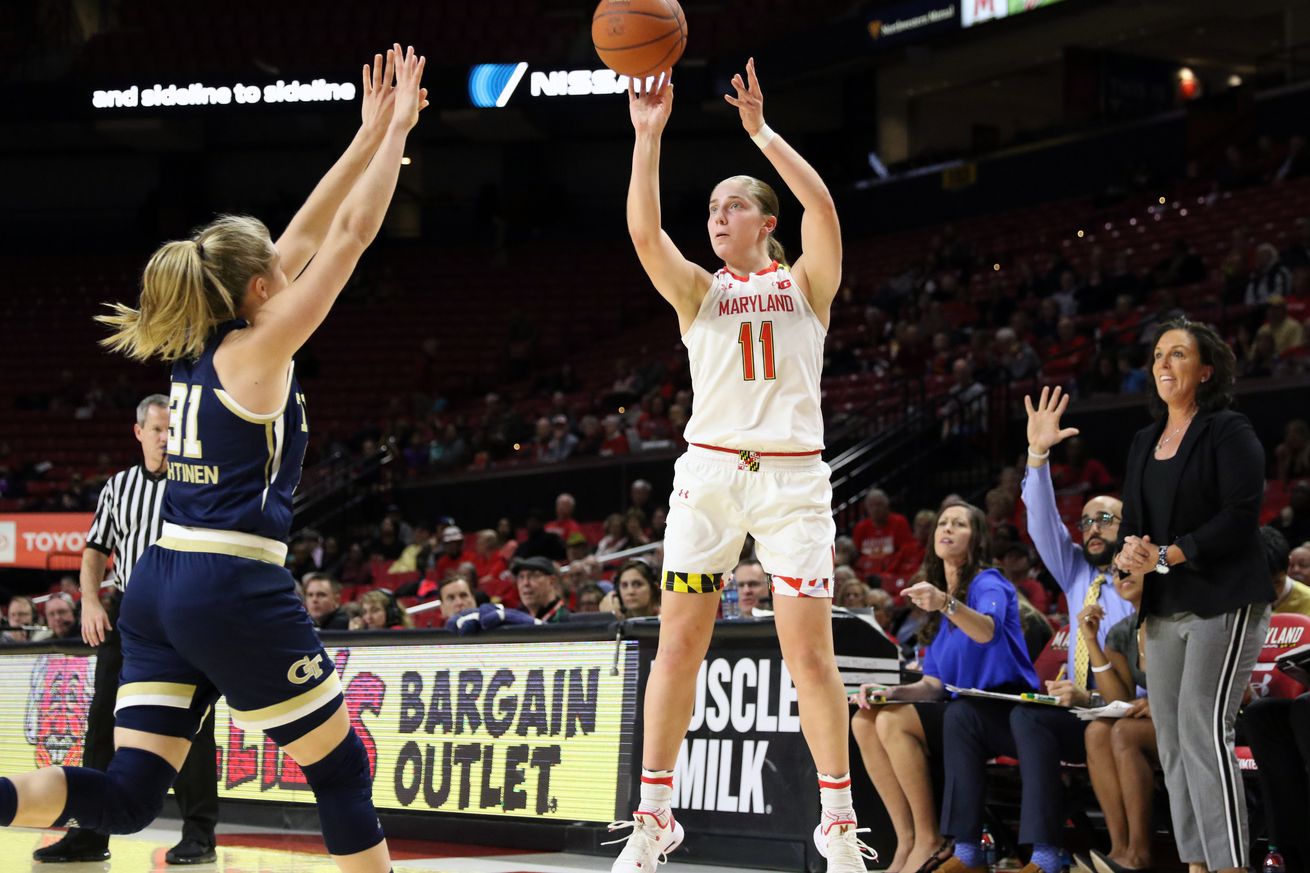 The Terps scored early and often against the Blue Hens.

After No. 8 Maryland women’s basketball failed to eclipse 30 points in the first half of each of its last two games, head coach Brenda Frese made it a point of emphasis in this week’s practices to start fast.

And the Terps did just that, as sophomore guard Taylor Mikesell’s 10 first quarter points helped them jump out to an early 20-4 lead which Delaware never threatened to overcome in a 99-55 wire-to-wire victory.

“I thought some areas we we’ve really been working hard on in practice showed today,” Frese said. “The quick start, especially defensively was a big improvement for us … I think obviously the more times that we get to spend together and rep in as a team we’re able to continue to improve.”

Mikesell finished with 23 points on 8-for-12 shooting to lead all scorers on the afternoon, while four other players also reached double-figures to bring the Terps within one point of cracking 100 for the second time this season. As team, Maryland shot 57.8 percent from the field, their highest mark of the season despite turning the ball over 18 times.

Just as Maryland has in each of its first contests, Frese deployed a full-court press after each opponent’s made basket to make getting the ball across half court a nightmare early on.

Taking advantage of a team that entered Sunday’s game with a -6 turnover margin, the Terps forced the Blue Hens into seven first quarter turnovers, resulting in 15 points off turnovers in just the first half of action.

Mikesell’s first quarter effort set the tone for the Terps offensive approach as the game wore on, with Blair Watson joining in on the three-point barrage into the second quarter. After connecting on 3-of 6 attempts her last time out, the senior guard hit on three of her seven first half chances from behind the arc to help Maryland shoot 43.7 percent from deep at the break.

Though their previous two games saw the Terps toggle back and forth between scoring runs and droughts, they managed to sustain a consistent offensive effort throughout this contest.

Scoring the most first half points since its opening game of the season against Wagner, Maryland continued to press the Blue Hens on both ends of the floor into the second half, scoring at least 27 points in each period after failing to break 20 in seven of its last eight quarters.

Inside the paint, sophomore forward Shakira Austin had one of her best two-way performances of the young season for the Terps on Sunday. Making her first start in 2019, Austin was in a zone on both ends of the floor, tallying 10 points while making finishing at the rim no easy task for Blue Hen slashers.

“If we wanna go where we need to go we need to use our 6’5” presence inside,” Frese said. “Having that size we’ve gotta be able to get Shakira to where she needs to be with the inside presence we’re gonna need to have.”

Such defensive energy from Austin and a host of other Terps almost completely threw off what Delaware wanted to do offensively throughout the game, as it struggled to ever get their two leading scorers in junior guard Tee Johnson and sophomore guard Jasmine Dickey going. As two slasher-type players, Johnson and Dickey combined to finish with just 29 points on the day on 11-35 shooting.

And the Terps forced Delaware into 25 turnovers on the afternoon, totaling 41 points off of those miscues.

And offensively, Mikesell continued to ride her hot start to the game into the second half, sinking each of her first three-point attempts to continue to stretch the massive lead the Terps had created for themselves.

“I love where Taylor’s at right now,” Frese said. “She’s taking great pride on both ends of the floor she understands quicker than most of how we want to play … Nobody shoots the basketball better than Taylor.”

Maryland finished the game shooting 12-for-27 from beyond the arc, with freshman guard Ashley Owusu pouring in 2-for-3 from deep as well, as the team got back in its rhythm.

1. The Terps corrected their defensive issues. Defending at the point of attack was a serious issue for Maryland in its last game against James Madison, but such wouldn’t be the case on Sunday afternoon. The Terps’ frenetic defensive effort from start to finish didn’t give Blue Hen guards an inch of space to operate off the dribble for much of the contest, while Austin capably turned away any shots that managed to make it to the rim.

“I think we’re just playing together,” senior guard Sara Vujacic said. “The alumni came to our practice and they talk about playing together and playing strong, being competitive and I think that was just the turning point.”

2. Despite the height advantage, Maryland spent most of the time on the wrong side of the rebounding margin. The Hens out-rebounded their opponent 22-18 after the first half of play, with Austin only managing to collect four in the 18 minutes she spent on the floor. Maryland’s sustained dominance throughout the game eventually flipped the rebound margin by the end of the game at 45-35. With Austin’s length, Maryland should find itself in a position to out-height other teams in almost every game, but being able to do so effectively has proven difficult so far this season.

3. It was a return to form for Taylor Mikesell. After Maryland’s previous two games saw the sophomore sharpshooter connect on just 2-for-10 of three point attempts, Mikesell was back to her old self in this one. Raining in five three-pointers on the day, Mikesell was the driving force behind Maryland’s offense on Sunday, as will likely be the case in several games this season if she keeps this up.

“Honestly just not thinking about it,” Mikesell said of resurgence from deep. “Just playing the game the right way, and just play through my teammates and know that it’s gonna come back to me.”