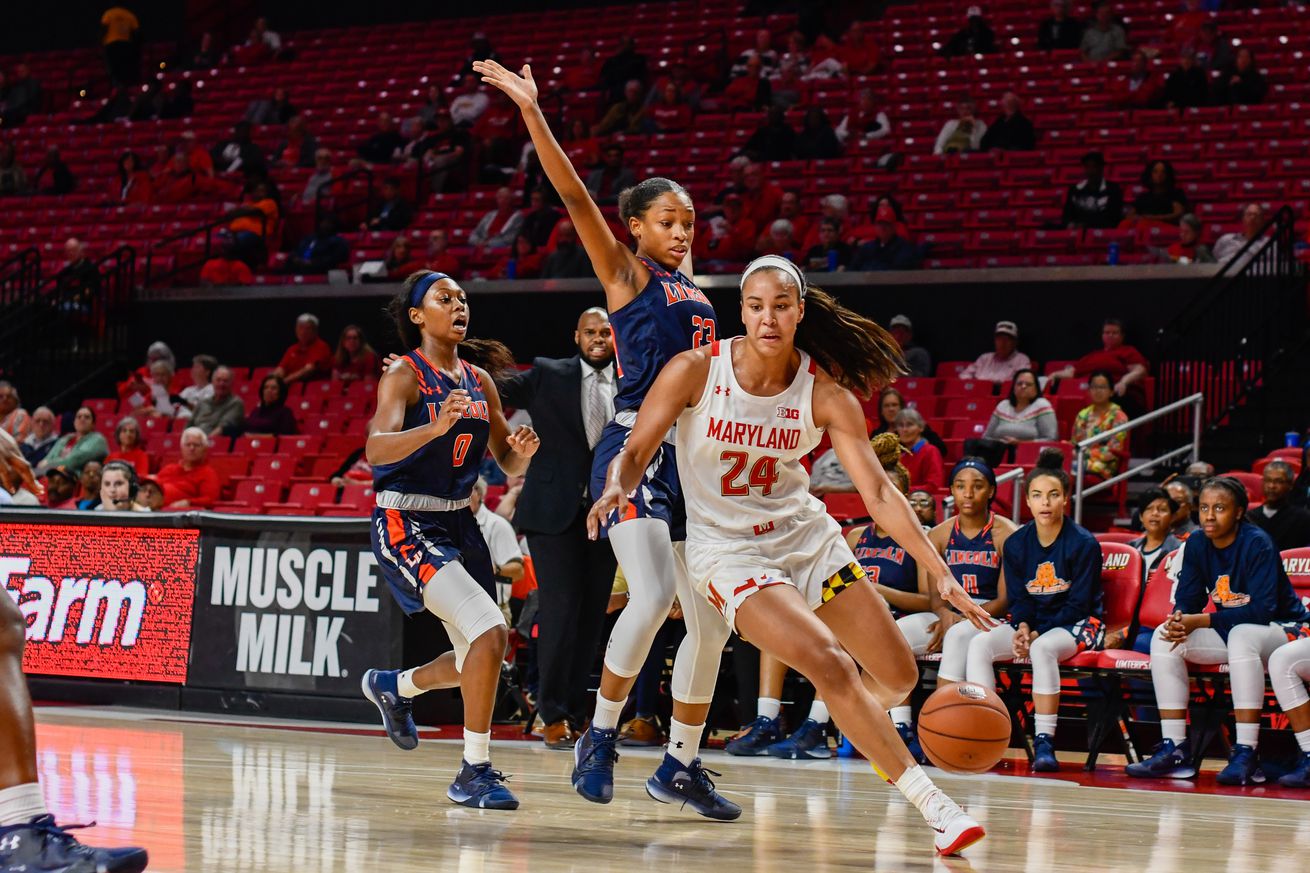 Following a miraculous come-from-behind victory over James Madison on Wednesday, No. 8 Maryland women’s basketball returns to the Xfinity Center to take on Delaware this Sunday.

The Terps (2-1), though still a top-10 team in the nation, have yet to hit their stride on both ends of the floor through three games this season. Their marquee matchup with No. 4 South Carolina on Nov. 10 saw them score the least amount of points in single game since the 2012-13 season, and if it weren’t for their 29-point fourth quarter at James Madison they would’ve been on track for another sub-60 point outing.

But Maryland has historically dominated its next opponent in the all-time series between the two teams, winning all 12 of their previous matchups with Delaware dating back to 2007. The Terps made the trip to Newark last season to face the Blue Hens, blowing out their opposition 77-53 with sophomore forward Shakira Austin leading the way with 17 points and a career-high eight blocks.

“They’re very athletic, experienced team,” head coach Brenda Frese said. “Being able to understand what they bring to the table, but also for us I think there’s a lot more things we need to clean up.”

Head coach Natasha Adair became just the fourth coach in program history back in 2017, but has struggled to revive a program that made a run to the Sweet Sixteen in 2013. Though she led the Blue Hens to the most wins since that 2013-14 season in her first year with the team, Adair is still looking to establish Delaware as a contender in the Colonial Athletic Association.

Senior forward Samone DeFreese (No. 22) was the team’s leading scorer a season ago, averaging 10.9 points per game on 40.4 percent shooting from the field. Though primarily a slasher, DeFreese has slowly worked to improve her outside game in her time under Adair, making her one of the Hens’ primary inside-out scorers.

Junior guard Tee Johnson (No. 10) has instantly made an impact since transferring from Tallahassee Community College this summer, playing over 26 minutes in each of her first two games with her new team. Prior to her year-long term in Tallahassee, Johnson spent a year at the University of Florida in 2017. She currently leads Delaware in scoring at 13 points per game and figures to play a large role in Adair’s offense this season.

Senior forward Nicole Enabosi (No. 33) is still working her way back into the Blue Hen rotation after an ACL tear forced her to redshirt the entire 2018-19 season.In 2017-18, she was the team’s leading scorer with an average of 18 points per game to go alongside 11.8 rebounds per game. Now with the addition of the 2017-2018 CAA Player of the Year back into the rotation for Delaware, Enabosi could be the spark the team needs to get back to contending in the CAA.

Rebounding. Like their previous opponent, the Terps again run into a team that rebounds the ball well. The Blue Hens averaged 42.5 boards per contest in two games, contributing to a plus-12.5 rebounding margin for the team. Though Maryland is a capable rebounding team as well, Delaware should give it plenty of trouble on the backboards.

Turnovers. After forcing their previous opponent into 18 turnovers last time out, the Terps could reach a similar mark against the Hens on Sunday. With a turnover margin of -6.0 and an assist-turnover ratio of 0.3, don’t be surprised to see Maryland roll out the same full-court press they’ve deployed against past opponents.

“We’re trying to take some of the pressure off of Diamond,” Frese said. “Just getting her in watching a lot of film there’s a lot of things that are really new to her … just trying to relieve some of that pressure that she’s placing on herself.”

2. Will Ashley Owusu continue to roll? Owusu has immediately thrived with the Terps in her young career, leading the team in scoring with 16.3 points per game while hitting the game-winner over James Madison on Wednesday. Seemingly setting the bar higher and higher with each game, Owusu is keeping her approach to each contest simple going forward.

3. Can Shakira Austin get going in the low post? Facing another matchup in which she’ll likely have at least a three inch advantage over the opponent’s tallest player, Austin could have another big game near the rim. Austin struggled to finish at the rim early against James Madison, but eventually got going, finishing with 21 points on the evening.

“It was definitely difficult, because even though they were only 6’2” they were still extremely long,” Austin said of her early struggles on Wednesday. “Our main thing was just making sure we can hit it inside and that’s eventually how we’ll get our outside shots.”