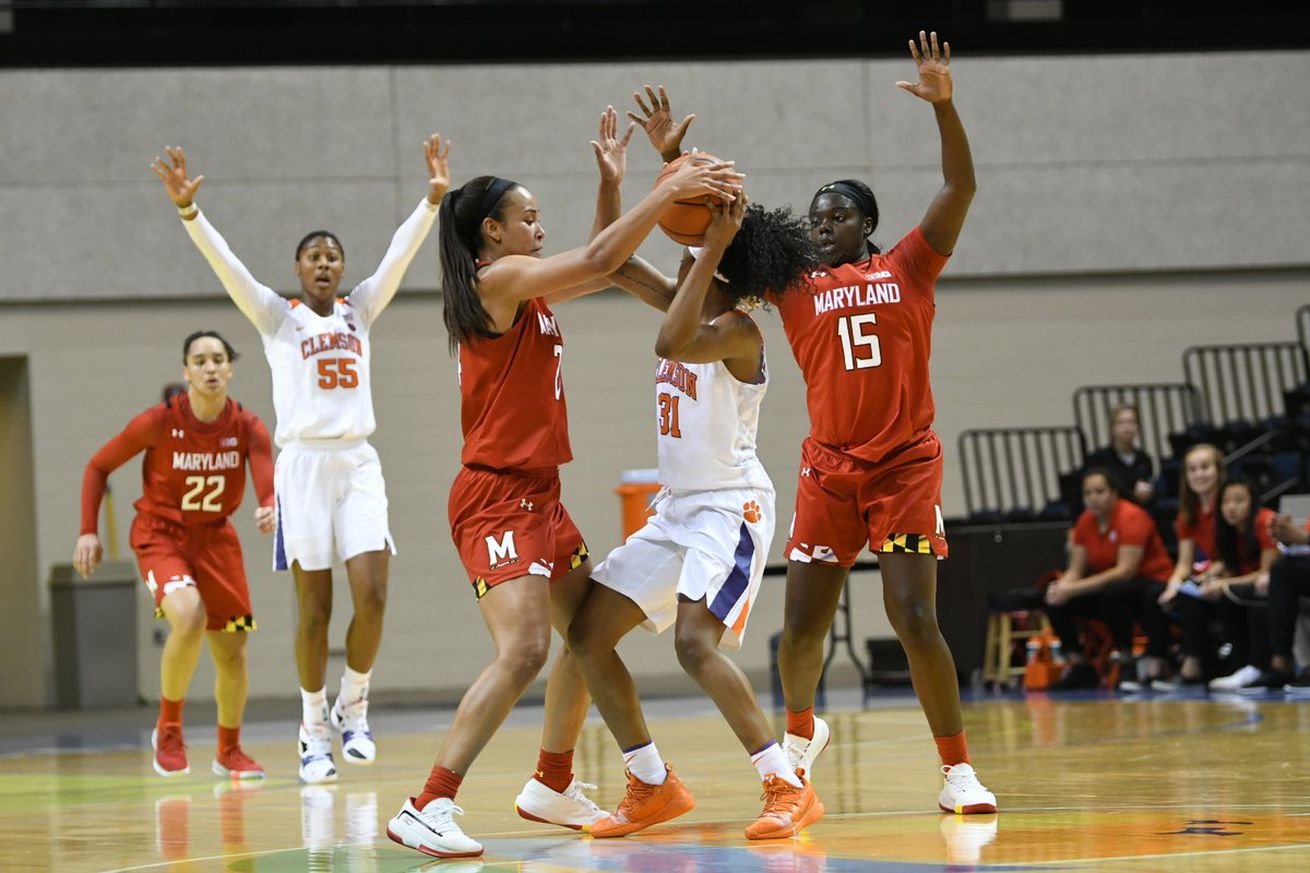 The Terps’ suffocating defense didn’t allow the Tigers to do anything of substance offensively.

With 4:31 remaining the first quarter of action, No. 9 Maryland women’s basketball looked for an opportunity to turn defense into offense against a Clemson team that was struggling to get the ball across half-court.

As Clemson forward Kobi Thornton looked for an outlet pass at the top of the key, senior guard Blair Watson tipped it away and to herself in the open floor. Taking it coast-to-coast, she carefully laid it home on the other end, stretching Maryland’s lead to nine while setting the defensive tone for the game.

Maryland’s defense forced 29 turnovers on the evening, its second most of the season which contributed to 33 points off of turnovers — the main source of its offense. The Terps are now averaging 32.4 such points per contest, which has been a big part of their 6-1 start to the season.

“I thought we came out hard, aggressively defensively,” head coach Brenda Frese said. “I thought that was a big key in our game, being able to force them into 29 turnovers on the defensive end.”

Following its second 100-point outing of the season, Maryland’s offense struggled to get itself going as quickly as it did against Quinnipiac last Sunday. Settling for far too many jump shots, the Terps connected on only one of their first five field goal attempts, shooting just 5-for-15 (33.3 percent) in the first quarter.

But Maryland still managed to run away in the quarter, with its aggressiveness and trapping yielding 10 first quarter turnovers and nine points off turnovers.

Maryland’s defensive energy extended across all 94 feet of the floor at the Ocean Center in Daytona Beach, making any set Clemson tried to run in the half-court a difficult endeavor. The Tigers managed just two field goals in the first quarter while finishing with five total points, the lowest first quarter total for a Terp opponent this season.

Traps and endless pressure from almost every Terp that took the floor resulted in 18 first half turnovers for the Tigers — nearly hitting their season average for turnovers per game in a single half. The turnovers led to plenty of fast break opportunities to help buoy the Maryland offense, picking up 23 points off of turnovers in the first half.

“Right now, I’m really excited about our defense,” Frese said. “It’s where we’re able to hang our hat. Until you can make shots, I think we were able to do a lot of great things in that first half defensively that allowed us to kind of put that gap in the game.”

After hitting on 50 percent of their shots from beyond the arc, the Terps struggled to hit on shots from behind the three point line in this one. With their two leading sharpshooters in guards Taylor Mikesell and Blair Watson shooting a combined 6-for-18 from deep, Maryland shot just 7-for-25 as team from three point land in this one, one of its lowest three point shooting performances since they shot 12.5 percent against South Carolina.

The Tigers cut the deficit as low as nine in the third quarter, but Maryland’s defense once again allowed its separation in the fourth.

With 7:10 remaining in the contest, sophomore forward Shakira Austin swiped the ball from junior guard Kendall Spray. She started the fast break and then sent a pass to Watson, who drained a three-pointer to stretch the lead to 18.

Watson’s score contributed to a 16-2 run to begin the fourth, with six more Clemson turnovers fueling the late run that let the Terps run away with this one.

1. Undisciplined teams don’t stand a chance against Maryland’s defense. As has been consistent in almost every game except against South Carolina, opposing teams simply cannot withstand the pressure the Terps put on up and down the floor. The Tiger offense could never find a rhythm in this one, due in large part to the gnat-like defense from the Terps all evening long.

“I think it’s just the energy we bring day-in-day-out,” Watson said of the team’s defensive prowess. “Especially on our traps and defense, it’s like we all build off one another. So once one of us is going, then the other one is going, and you can see it on the floor.”

2. Maryland struggled to control the boards. Despite owning the height advantage once again, the Terps failed to win the rebounding battle in this one. Clemson out-rebounded Maryland 43-36, marking the fourth time they’ve been beaten on the glass by an opponent this season.

3. Shakira Austin reached double-digit scoring for the fifth straight game. Austin was driving force of the Terp offense in this one, using her height and soft touch around the rim to finish second the team in scoring with 17 points on the night. She fell just short of her career-high of 20, but the sophomore forward is beginning to show the consistency Frese said she had improved upon this offseason.

“My teammates are just finding me,” Austin said. “It started with defense, we had a lot of energy in our 12 to start it off with a lot of steals and we were able to attack on the offensive end.”