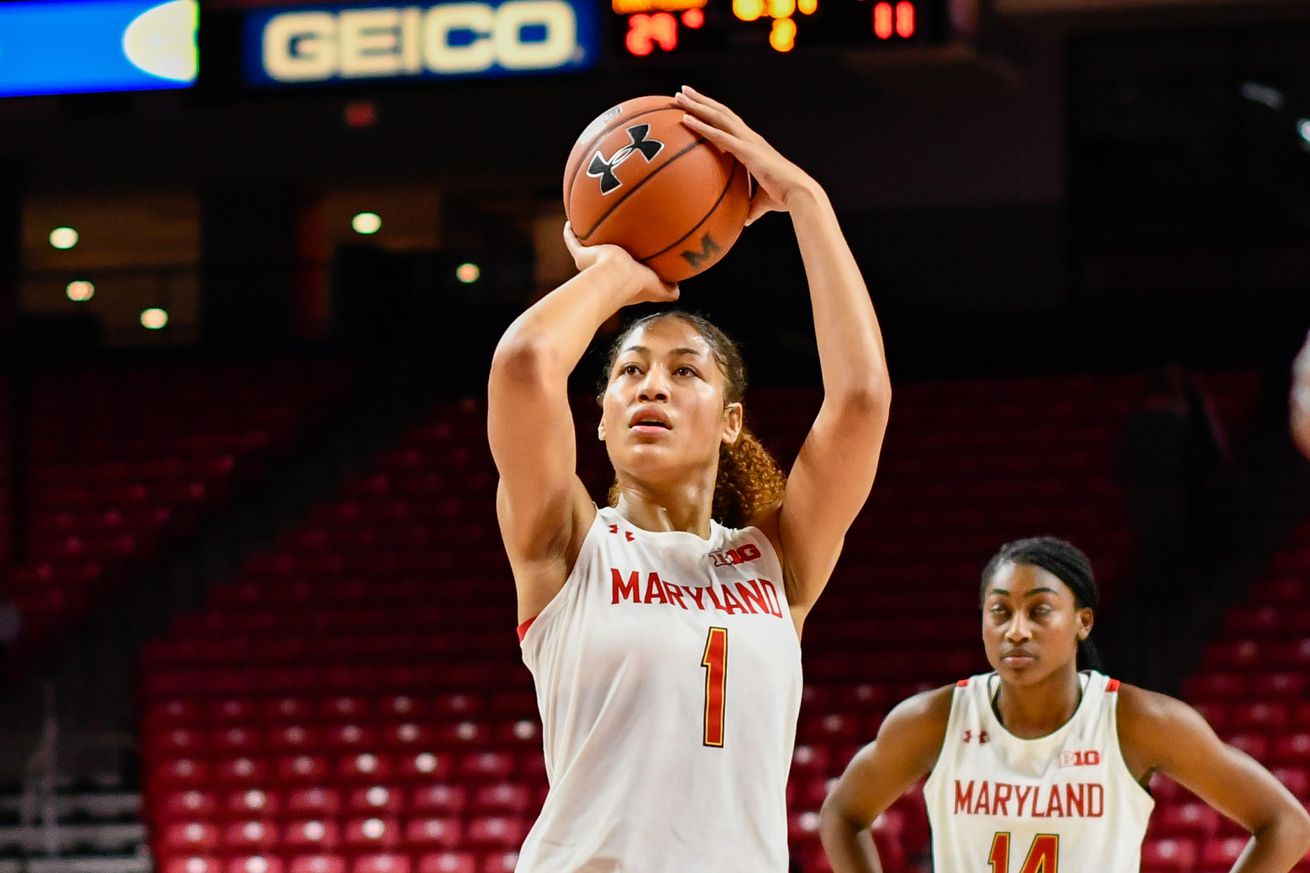 The Terps pick up a convincing win before the Daytona Beach Invitational.

After stripping the ball in the paint in the middle of the third quarter on defense, sophomore forward Shakira Austin dove to the floor to secure a turnover and flung the ball up the court to a streaking Blair Watson, who converted a wide open layup.

The steal and assist were just a microcosm of the all-around effort from Austin Sunday to help lead Maryland women’s basketball to an 107-52 victory over Quinnipiac — the team’s third consecutive win by over 30 points.

“It was a really inspired game by our team,” head coach Brenda Frese said. “You saw from the minute of the tip it was a balanced attack on both ends. I thought [it was] probably one of our most complete games. Really excited to be able to see how far we’ve grown as a team on both ends of the floor.”

Austin finished the afternoon with 16 points on 7-for-8 shooting from the floor, along with seven rebounds, three assists, three blocks and a steal in just 24 minutes.

Five other Terps also finished in double-digits, including freshmen Ashley Owusu and Diamond Miller, who had 19 and 17 points, respectively.

“It’s important to have other players that can score so we can be more successful,” senior Kaila Charles said. “I like the fact that we had six players in double figures, and we’re going to need that for the whole season for us to get as far as we want to. it’s a little different from the last couple years, but it’s fine with me.”

Maryland went on numerous runs in the second half to further separate its margin of victory and make this an all-around blowout, outscoring the Bobcats 62-29 in that span, but Austin put the team in prime position to do so with her second quarter performance.

The sophomore exploded in the period, putting in effort on the offensive and defensive ends of the floor to help the Terps fight back against a Quinnipiac team that attempted to fight back.

Maryland answered a 12-11 Bobcat stretch of play as Miller was able to get a defensive rebound, push it up the floor and dump it off to Austin with 2:56 remaining in the half to give the Terps a 39-19 advantage.

At halftime, the Terps held a 45-24 lead thanks to a 25-17 rebounding advantage and had 30 points in the paint. Austin led all scorers with 16 points and added five rebounds through the first 20 minutes.

Maryland won the opening tip, but a missed layup by Charles and a return three by Quinnipiac gave the Terps their first deficit since facing James Madison on Nov. 13. But they snapped back into focus and increased the all-around intensity, sparking a 13-0 run and forcing a timeout by Quinnipiac.

Out of the timeout, a five-second violation on the inbound gave Maryland the ball back once again, where Austin put in a layup off the glass to cap off what was a 15-0 Maryland run with 5:08 remaining in the first quarter.

“We definitely realized from the jump they don’t have the height to be able to stop us inside,” Austin said. “Coach is always enforcing, ‘We’re going to start in going inside-out,’ so I think that helped us in the first half a lot. And in the second half, everybody else was able to get their shot and be able to ease it out because of the great first half.”

The Terps continued to press into the second half despite the Bobcats doing their best to keep Austin off the board — holding the Bobcats scoreless for the first 5:11 of the third quarter.

With Austin limited in the third, seven Maryland players were able to find their way on the score sheet as part of a 33-4 third quarter run that gave the Terps a 78-28 lead. Owusu, Mikesell and Charles came through early as the Terps opened with a 14-0 run in the second half.

Miller, Sara Vujacic and Stephanie Jones kept the intensity up in the latter half, as a separate 17-4 stretch helped continue Maryland’s its third quarter dominance.

“Honestly it was fun to watch,” Charles said. “Just seeing us getting those stops and it was leading to our offense made the game easier and fun and led to our transition.”

In the fourth quarter, Austin was fouled hard by the Bobcats, tumbled toward the bench and was subsequently subbed out for the rest of the afternoon. With her sitting the rest of the way, the Terps got a spark from Vujacic in particular, who finished the game with 11 points and three assists — all coming in the second half.

1. Maryland finally controlled the rebounding margin throughout. The Terps had struggled to command the rebounding margin despite playing some smaller opponents, but did so against the Bobcats. A 25-17 margin in the first half laid the foundation for a 41-31 margin by the end of the game. Austin and Charles led the way with seven rebounds each.

“Great” was the one word Charles described the team’s performance on the boards with. “Throughout the whole season, coach has been challenging us to step up on our rebounding, focusing on boxing out. So the fact that today we finally were able to make it translate — we still have a little bit things to clean up — just seeing how dominant we can be on the boards and how that helps us win is a great eye-opener, and we just need to keep building on that.”

“It was a relief I guess,” Jones said of finally reaching this career mark after a couple misses. “Because I knew it was coming so it was kind of in the back of my head. I had [the team] behind me, supporting me so just to have that was great.”