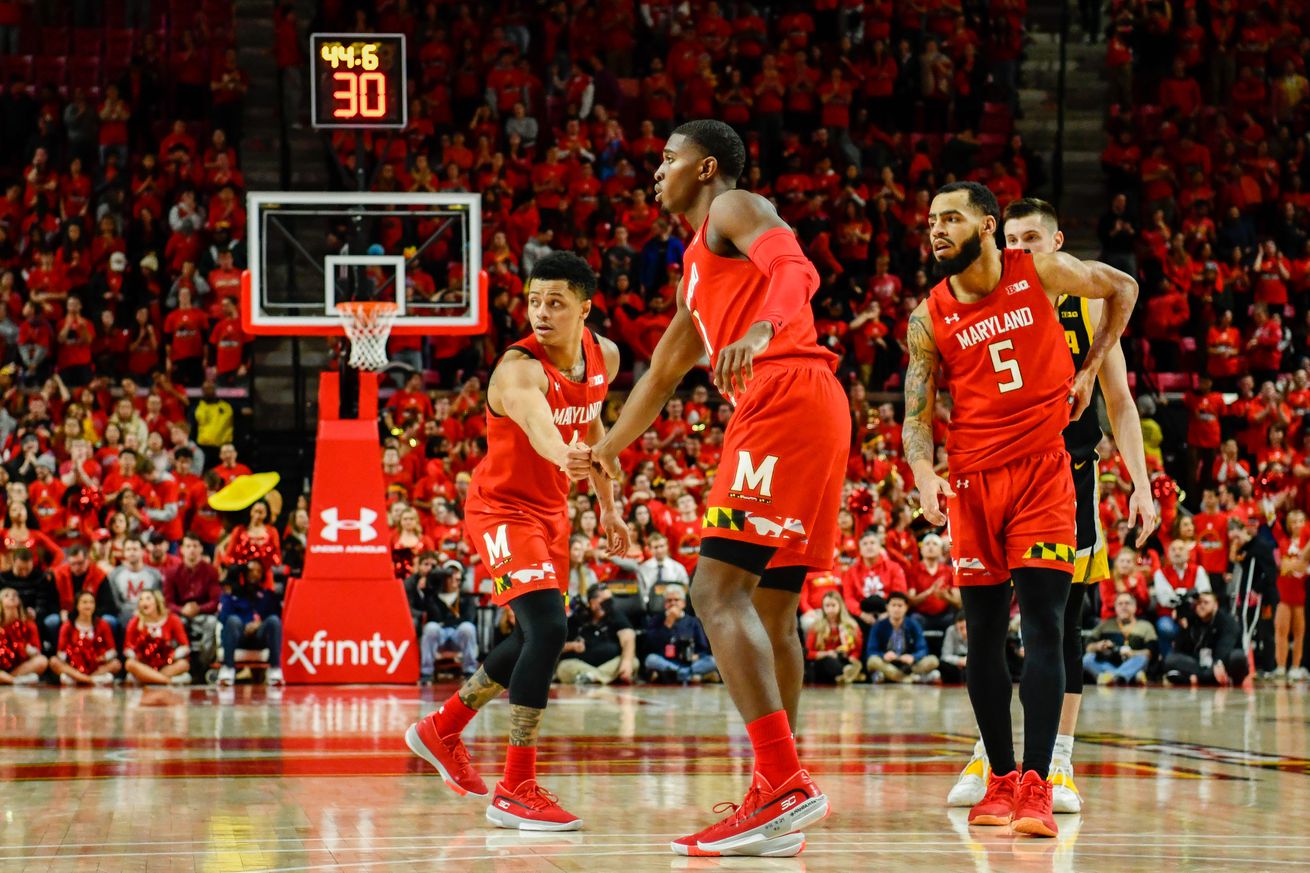 Here’s what we noticed from the Terps’ last January game.

No. 15 Maryland men’s basketball was boosted by Anthony Cowan Jr. and Jalen Smith Thursday, leading to an 82-72 victory over No. 18 Iowa.

Last time these two teams met, the Hawkeyes’ dynamic duo dominated the Terps all night long. Garza and Wieskamp combined for a game-wrecking 47 points — Maryland had just 49 as an entire team.

And while their point totals at Xfinity Center on Thursday were solid by night’s end — Garza finished with 21, Wieskamp had 17 — those final tallies are misleading.

Garza dealt with foul trouble from the get-go, picking up two fouls before the 15:00 mark to start the game, which limited him to just 10 first-half minutes. In that time, he was held to six points and two rebounds as the Terps overcame a small deficit and took a lead into halftime.

Wieskamp, on the other hand, got off to a quick start. After his second three of the afternoon at the 12:29 mark gave the Hawkeyes an 18-12 lead — their largest of the entire game — the sophomore had eight points on 3-of-4 shooting from the field.

“He’s so good. Golly,” head coach Mark Turgeon said. “He was a McDonald’s All-American, and he’s a pro in my mind whenever he decides to be that kid.”

But from that point on, the Terps — primarily Darryl Morsell and Aaron Wiggins — put the clamps on Iowa’s best shooter. It took 20 minutes and 41 seconds of game time for Wieskamp to score again — he converted at the free-throw line — and then it took two more minutes for him to make his next field goal.

Wieskamp missed his next seven shots from the floor, including two from beyond the arc, and ultimately finished 5-of-14 on the night. As efficient as he was a few weeks ago, he was nowhere near that on Thursday night.

“I think he got a little tired at one point, started to miss a couple shots in a row,” Wiggins said. “Just making adjustments, going over ball screens, denying him the ball and not allowing him to get open shots was our biggest thing.”

2. The Terps established themselves inside

A big part of this was containing Garza and limiting his impact on the game, as mentioned above. But Maryland’s ability to control the interior extends beyond just one player’s success (or lack thereof, in this instance).

Thanks to Smith, Morsell and Cowan attacking the rim, the Terps scored 34 points in the paint, tying their most in a game in 2020 set against Indiana on Jan. 4. The senior point guard was particularly efficient inside the arc, going 6-of-7 on two-point shots, most of which were from point-blank range.

Smith also put together one highlight-reel sequence after another on both ends of the court, contributing to Maryland’s eight blocks on the night and adding some emphatic dunks to get the crowd going.

Jalen Smith with two blocks and a monster dunk in less than a minute.

P.S. If Darryl Morsell completed that alley-oop, the Xfinity Center would have erupted. pic.twitter.com/oQSF5Ms0Bj

“Coach Turgeon said he needed me to try to grab every rebound off the backboard,” Smith — who finished with 14 boards — said. “That’s what I’m trying to, just continue to play my style of my game.”

3. Maryland took care of the basketball once again

Entering Thursday’s game, the Terps were coming off two of their best passing performances of the season. Against Northwestern and Indiana — both on the road — they combined for just 11 turnovers and had a whopping 30 assists.

And while it didn’t quite keep up that pace against Iowa, Maryland still found a way to facilitate both effectively and efficiently. Aside from a couple giveaways in the final two minutes with the game essentially over by that point, the team had just eight turnovers.

Cowan again had another strong passing performance, picking up six assists to two turnovers — with one coming with just 1:39 left in the game and the Terps up 11. In addition to scoring at absolute will, he also found his teammates for open baskets early and often.

He hits a monster three to get Maryland’s lead to double-digits. pic.twitter.com/St1wi3T1Zf

Even with the last two mistakes tacked on, that’s just 21 turnovers through three outings for the Terps, and it’s not a coincidence that those are three of their best overall games of the season.

“Guys are just making better decisions,” Turgeon said. “I’m like, ‘Hey guys, play free.’ We’ve been so uptight all year. … We worked on it. We work on turnovers, and we’ve been working on it for two years. I know you think I’m crazy, but we have, and it’s nice to see.”