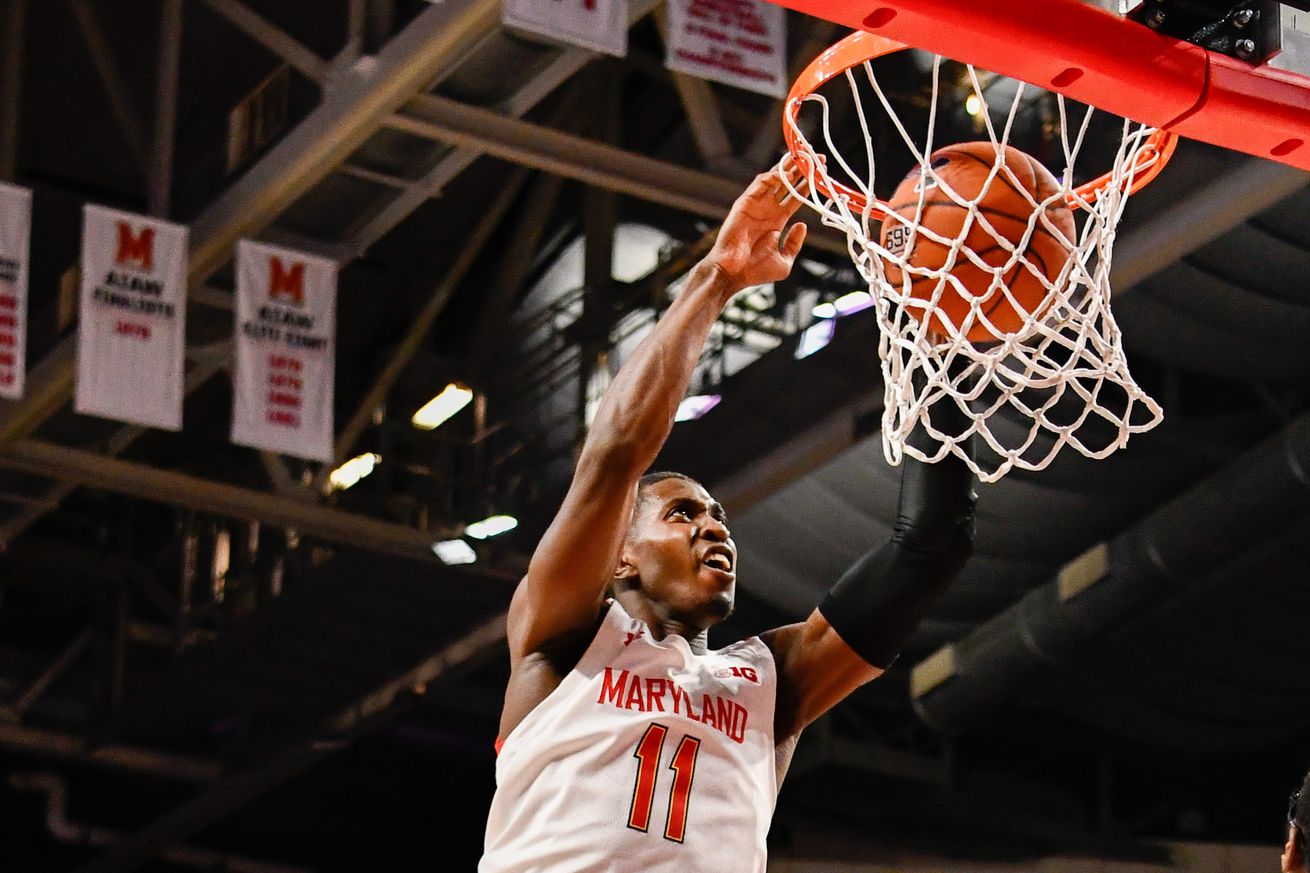 Here’s what stood out from the Terps’ fifth consecutive victory.

Here’s what stood out from the Terps’ 13th win at home.

1. Darryl Morsell did it all for the Terps

While Maryland forward Jalen Smith will receive the majority of the credit for the Terps’ fifth-straight victory, guard Darryl Morsell had a major impact on the outcome of the game — despite finishing the first 20 minutes with three points on 1-of-5 shooting and two turnovers.

The Mount Saint Joseph product finished with 14 points — his most since his season-high 17 points against Marquette Dec. 1 — on 5-of-10 shooting, two assists and six rebounds.

“Darryl just flipped that switch himself,” Smith said. “He knew that he wasn’t playing the way he’s normally playing. …I told him ‘Just get back to normal.’ And he just went off from there.”

With Maryland trailing by five just about three minutes into the second half, Morsell took a handoff from Anthony Cowan Jr, took two dribbles and appeared to leap from the Big Ten logo to slam home the two-handed jam. The junior’s flush was only Maryland’s second field goal in over 12 minutes of play that continued from the first half.

Darryl Morsell electrifies the Xfinity Crowd with this aggressive dunk.

The junior literally took off from the Big Ten logo. pic.twitter.com/Lm2tLHM23q

Nearly eight minutes later, Morsell grabbed an offensive rebound from a Serrel Smith Jr. miss and put in the layup for two points.

After the Terps picked up a crucial stop on defense, Morsell received the ball in transition and threw a pass across the lane to Aaron Wiggins at the three-point line. The wide-open sophomore knocked down his only three-pointer of the evening, giving Maryland a seven-point lead — its second-largest advantage of the night.

Darryl Morsell literally does it all for the Terps. pic.twitter.com/Adx7A9Kph0

“I don’t really like talking about myself, but I feel I’m a tough kid,” Morsell said. “At halftime I got challenged. … I don’t know what was going on in the first half. I’m missing layups — the rim is blocking my layups and stuff like that.”

For the first time since the first week of December, Morsell has scored in the double-digits for three-straight games. However, prior to his performances against the Terps’ past three opponents, Morsell struggled to score with just a combined 18 points on 5-of-25 shooting against Iowa, Wisconsin, Purdue and Northwestern.

Tuesday night, though, should serve as a reminder that Morsell is the straw that stirs the Maryland drink as the team is now midway through Big Ten play.

2. At times, Maryland struggled to score the ball

Their fourth and final three-pointer of the first half was contributed by Morsell at the 12:51 mark. From that point on, Maryland entered halftime with only two more field goals, including a Ricky Lindo Jr. layup nearly three minutes later.

The Terps went without a field goal for the last 9:21 of the half, and their only points came from Cowan free throws within the final two minutes.

During that more than nine minute stretch, Maryland possessed the ball 15 times with an opportunity to separate itself from the once ranked Scarlet Knights. Instead, Rutgers constructed a 9-0 run, and the Terps completed the half with four turnovers and missed their final seven three-pointers in 11 of their final possessions.

The Scarlet Knights entered halftime riding a 19-4 run with Maryland unable to get anything going offensively.

“At halftime we just talked about, ‘Keep your head up, play with energy, play with confidence.’ I think we’re too late in the season to be hanging our heads on missed shots,” head coach Mark Turgeon said. “I told them after the game, ‘We missed them all year, guys — quit hanging our heads. Let’s just battle.’ And that was the disappointing part of the first half.”

Due to the contributions of Smith and Morsell, who combined for 14 of the team’s first 22 points in the second half, Maryland’s field goal woes disappeared for about 15 minutes after halftime.

The struggles returned for a bit, though.

With his team holding onto a five-point lead, Cowan hit his second three-pointer of the evening, pushing the Terps up eight with 5:10 remaining.

Cowan’s shot from deep was Maryland’s final field goal of the night as the team was kept afloat by free throws. In the final five minutes of the game, Morsell and Cowan provided the team’s final nine points from the charity stripe to pull away for the victory.

3. The Terps are now tied for first place in the Big Ten standings

Prior to this season, Michigan State and Big Ten Preseason Player of the Year Cassius Winston were chosen to win the Big Ten.

But the No. 16 Spartans have recently struggled, dropping their past two games — including Tuesday night’s showdown at home against No. 22 Penn State.

With the loss, Michigan State drops to sole possession of second place in the conference.

Maryland, on the other hand, needed to remain unbeaten at home Tuesday night to leapfrog the Spartans and go to the top of the Big Ten, which it accomplished.

And despite losing their first three conference road games, the Terps are now in a tie with Illinois for the top spot in the Big Ten kingdom, building hype for Friday’s matchup in Champaign.

“The Big Ten’s a very tough league, so you lose a game, that could affect your seeding — you could drop four or five seeds just by losing one game,” Morsell said. “And we’re all aware of that.”