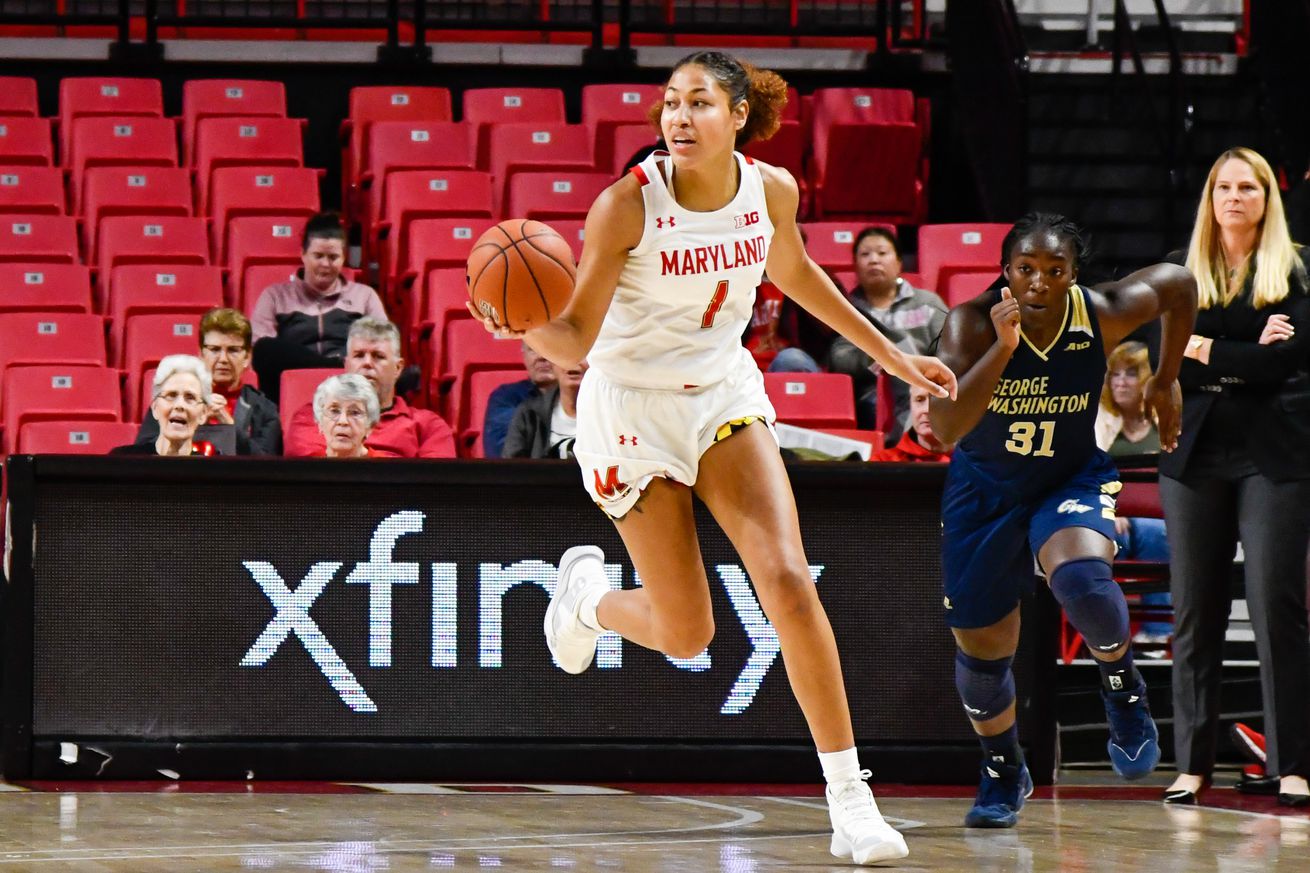 The Terps kept on the right path against the Colonials and are starting to build confidence.

Fresh off of a dominant performance against Delaware, No. 9 Maryland women’s basketball was looking to continue its path against local foe George Washington, and it did just that.

The Terps took home an 88-54 victory that included 19 points and a tied career-high in made three-pointers by sophomore Taylor Mikesell, a near triple-double from freshman Ashley Owusu and a solid performance from sophomore Shakira Austin in her second consecutive start.

“I thought it was nice to see we picked up where we left off on Sunday with our aggressiveness on both ends of the floor,” head coach Brenda Frese said. “I liked how we set the tone early — especially with our defense — I thought our defense, we forced about 10 turnovers in that first quarter and we were really locked in.”

Maryland was able to take a 23-7 lead by the end of the first quarter. And despite the Colonials’ best effort through the rest of the game, the Terps’ early lead was all it took to earn the win.

Here are some takeaways from Maryland’s big win over George Washington:

1. Starters contribute big in most minutes together

For the second game in a row, Brenda Frese sent out the starting lineup of Owusu, Mikesell, Kaila Charles, Blair Watson and Austin. But, against the Colonials, Frese left this same lineup in for four minutes and 35 seconds — a season long for any starting group.

“They were really connected,” Frese said. “I thought they set the tone with their defense, which led to their offense. You could see it on the defensive end — their energy, their communication — and if it’s broke, there’s nothing to fix.”

By the point of the first substitution, Maryland held a 13-4 lead and was able to then build off of that strong start. The previous long — of two minutes and 39 seconds — came against Delaware with the same lineup, but was mostly due to the offensive side of the game.

Against George Washington, the starting group forced seven turnovers by the Colonials, including two shot clock violations within the first four minutes. Austin was one of the biggest parts of the defense — tallying two blocks and a steal — while Charles also nabbed a steal in the first shift.

2. The Terps continued their successful run of play in transition

Though the numbers were not as drastic as in the win against Delaware, Maryland finished Wednesday’s game with 31 points off of George Washington’s 22 turnovers, as well as 16 fast break points. The Terps also tallied 23 assists, with nine coming from Owusu.

The team’s connection was evident throughout, but particularly in the second quarter. Off of a defensive rebound by Charles, Owusu and Jones were able to break out quickly and find their lanes, creating a quick two-on-one at the rim for an easy layup to extend the Terps’ lead.

Ever since the Terps scored just 12 points off turnovers against South Carolina and lost the turnover battle to James Madison, they’ve been working on shoring up their consistency when running in transition after creating turnovers, and the stellar play of Owusu has been a big part of the team’s success. Moving forward, repetition and focus will be the keys to continued success in open space.

3. Maryland cemented its post presence and used that advantage to steadily keep control

Another aspect of its game that Maryland has been working to implement is its inside-out play, and against George Washington the post players shined.

The Terps scored 38 points in the paint as Austin finished with 15 points, while Stephanie Jones added 12 and Charles scored 11.

“Out main focus is working inside-out,” Austin said. “It showed in the first quarter, we were able to get the ball inside and put it outside and go back in. Just being able to rotate the ball too has been a big emphasis and I think we’ve been executing enough to be able to keep going back inside.”

Rebounding is one aspect of its game that Maryland will look to improve upon, as the team had just a 34-29 advantage on the boards. The Colonials were able to snag 14 rebounds on the offensive end and score 12 second chance points, which could be a defining stat in close games.