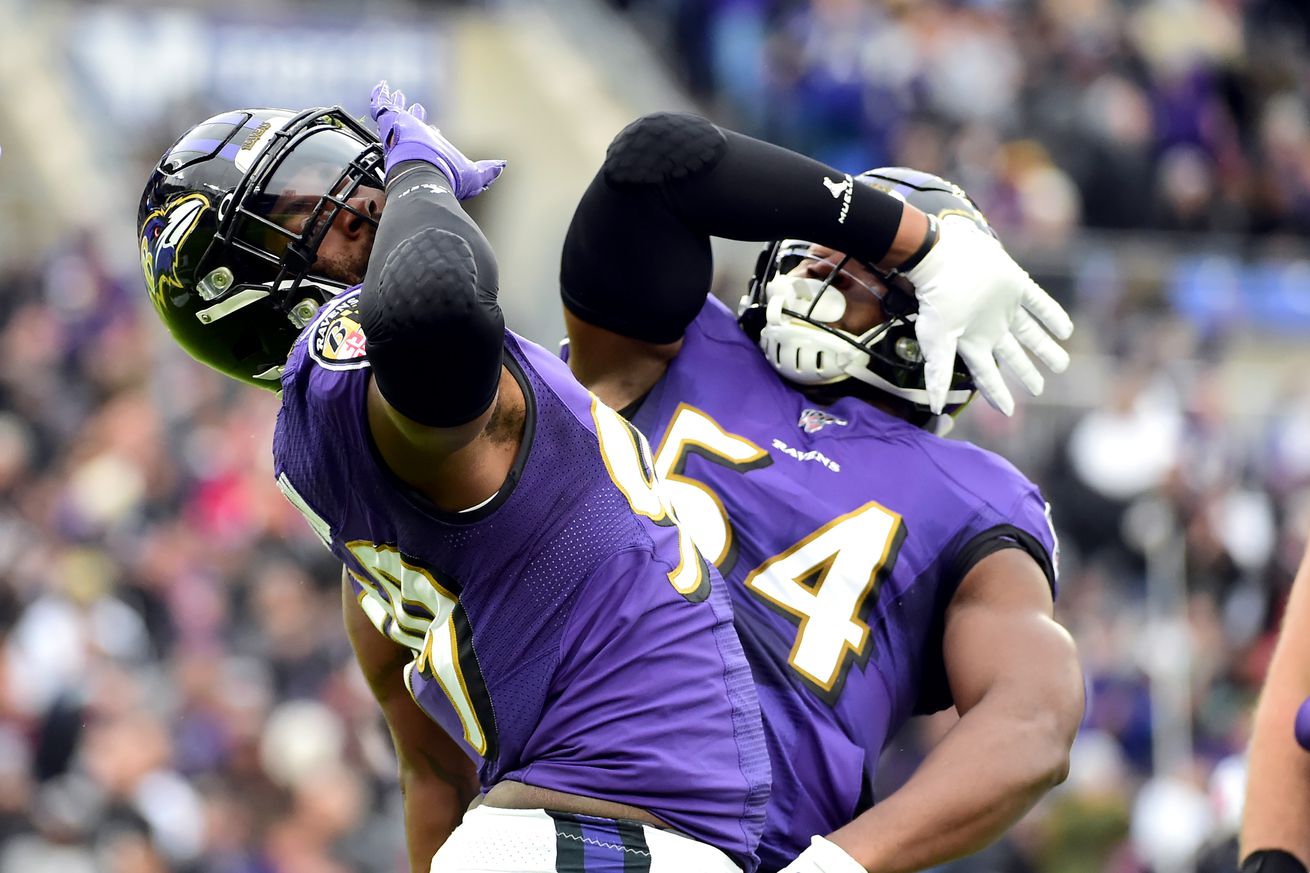 Next up on the 2019 season report card list are the linebackers, starting with outside linebackers and then inside ones.

You can find other position grades here:

In a contract year, Matthew Judon did a nice job of earning himself some money. Judon, 27, took the challenge of being “the man” at outside linebacker with Za’Darius Smith and Terrell Suggs no longer in the picture and ran with it, posting career-highs in multiple categories:

In addition, he was once again productive as a tackler with 54 combined tackles, 43 of which were solo, and 14 TFL. His ability to generate pressure and rush the passer were especially vital, though. Judon was the only established edge rusher on the roster this year and despite other teams knowing this, he was still able to be very productive.

Some of this has to do with “Wink” Martindale’s complex, blitz-heavy scheme but the fact of the matter remains: Judon is good. His pass-rushing production is even more impressive when you consider the fact that Judon dropped into coverage far more than the majority of other edge rushers, which limited his opportunities to record sacks, QB hits, etc.

Judon is versatile and in the prime of his career. As a result, the Ravens almost certainly can’t afford to lose him in free agency, at least not without retaining capital in the process.

In an all-important season, Tyus Bowser stepped into the largest role of his young career thus far and showed improvement. Bowser finished the season with the second most sacks on the team – five – while also chipping in 20 tackles and 10 QB hits. He also added a forced fumble, too.

Bowser has been one of the better athletes on the team for several years now, it’s just been a matter of harnessing and turning his athletic tools into positive on-field results. While far from perfect in 2019, Bowser’s growth was certainly a step in the right direction.

He looked more comfortable when tasked with setting the edge, whether that be to rush the passer or stop the run. Bowser still has a decent amount to work on but with another strong offseason and step forward, he could be due for an even further career-best campaign in 2020-21.

In what was largely an up-and-down rookie campaign, third-round pick Jaylon Ferguson showed flashes and promise – enough for fans and the organization to be excited about moving forward.

It looked like Ferguson wasn’t set to play all that much this season but when Pernell McPhee suffered a season-ending injury, plans quickly changed. He saw his snap count jump from 13% to 31% between Week 3-4, and then 36% to 53% from Week 5-6. From that point on, Ferguson never played less than 63% of defensive snaps.

He finished the season with 20 tackles, 2.5 sacks. six TFL and nine QB hits, which aren’t too shabby. However, for Ferguson, the key this offseason will be working on his footwork, awareness and pass-rushing moves, three of the same aspects of his game most scouts said he needed to improve upon around the time of the draft.

Ferguson is a physical presence but in order to further unlock his pass-rushing prowess, he’ll need to have more moves than just a basic bull rush. In addition, becoming more consistent in setting the edge is paramount, too.

Expectations were high for “Peanut” entering the season. Billed as the heir to C.J. Mosley’s throne at the inside linebacker position, Onwuasor was given the “red dot” to begin the year, tasked with relaying play calls to the rest of the defense. However, after just a few weeks, it was evident that Onwuasor was not fit for true MIKE duties.

Along with much of the rest of the defense through the first four weeks of the season, Onwuasor looked lost and struggled to tackle in space. It’s hard to pin the defense’s communications issues all on him, but “Wink” Martindale was quick to move play-calling duties from Onwuasor to SS Chuck Clark. Then, the Ravens signed L.J. Fort and Josh Bynes, the latter of which immediately stepped in as the starting MIKE linebacker.

Following these moves, Onwuasor’s snap count took a midseason dip before slowly evening out over the second half of the year. As he transitioned into more of a natural weak-side linebacker role, Onwuasor looked more comfortable. In 14 games, Onwuasor wound up finishing with 64 tackles, three sacks and a forced fumble.

When Onwuasor can sort of roam and lurk around the middle of the field, he’s quick to close on ball-carriers and has a nose for the ball. However, his limitations become apparent when it comes to getting off blocks and recognizing plays before and/or as they happen.

More than five seasons after his first stint with the Ravens, veteran LB Josh Bynes was picked up off the street by his former team and thrust into a large role. The 30-year-old responded admirably and immeditably provided a calming, stabilizing force at the position.

While not quite the same athlete he used to be, which works against him at times like any veteran linebacker, Bynes was solid more often than not. In 12 games, he recorded 46 combined tackles, seven TFL, four defended passes, two QB hits and two interceptions, the latter of which could have been higher had he not dropped one or two gimmicks.

Perhaps more importantly, Bynes was given a PFF grade of 75.9, far and away the best grade of any middle linebacker on the roster. The Ravens will likely seek to get younger and more athletic this offseason, meaning retaining Bynes may not be high on the priority list.

However, at an increasingly devaluing position, bringing Bynes back into the fold on a one-year deal is certainly a viable option.

Like Bynes, L.J. Fort was signed ahead of the team’s Week 5 matchup against the Steelers, although he didn’t suit up until the following game. Fort entered the fold with the reputation as a journeyman special teamer but proved to be a more-than-capable contributor at the linebacker position.

The Ravens didn’t ask too much of Fort throughout the season but when his number was called, he seemingly always made a key play or two. His performances against the Seahawks and Bills come to mind, to name a couple.

Fort finished the season with 35 tackles, four TFL two sacks, six QB pressures, and a PFF grade of 70.1. Just a few weeks after joining the team midseason, the Ravens rewarded him for his play with a two-year contract extension.