The Baltimore Ravens have extended CB Marcus Peters to a 3 year 42 Million Dollar contract. This is yet another one of GM Eric DeCosta’s aggressive moves to keep the Ravens team strong for the foreseeable future. Ever since Peters hit the scene in week 7 against the Seahawks he has been a tremendous help to this Ravens’ defense. He has complimented Marlon Humphrey very well and allowed the Ravens to deal with teams with dual threats at WR all season long. This extension has now further solidified a very strong secondary and is another step toward keeping this Ravens team as a top competitor on defense for years to come. As it stands, DeCosta and the Ravens have the following players from the secondary: Earl Thomas (2023), Young (2023), Marlom Humphrey (2022), Marcus Peters (2023), and Chuck Clark (2021) locked down for the next few years. The only big question mark that remains is CB Jimmy Smith (contract ends 2020). If the Ravens can sign Smith for a few more seasons they would have arguably one of the best groups of DBs for a little while, allowing them to focus on other needs the team may have. 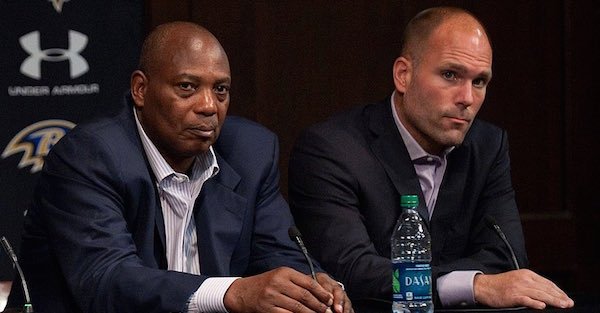 This move has been one of many made by the Ravens organization this year to keep the team together for some years to come. The Ravens have found a ton of success this year and if a franchise wants to keep winning they have to make the right moves year in and year out. A lot of fans think of successful franchises and immediately think of the star QB, Head Coach, or any other superstar on the team as the main cause. Well, this is true to an extent but we have seen that Franchises with a solid office (GM, VP, owner, etc) have seen the lions share of success in the league throughout the years. Ravens fans have been very fortunate to have great GMs like Ozzie Newsome  and Eric DeCosta as his successor. They seem to have made many great moves to keep this team very competitive and give the fans one heck of a team to watch each and every week. Of course this is no slight to the amazing coaching staff in Baltimore, and the many great players on the roster. Fans are enjoying this season as the Ravens have found themselves at the number one seed for the first time in franchise history. Thanks to DeCosta and the rest of the Ravens  organization, there’s a good chance this will be a trend for some years to come.

For some insight in the Ravens current contracts see the link below: