The Ravens have some extra cash to work with, thanks to star cornerback Marlon Humphrey. Now, $2.254MM of his base salary has been reclassified as a signing bonus, carving out roughly $1.8M in cap space (Twitter link via Field Yates of ESPN.com). 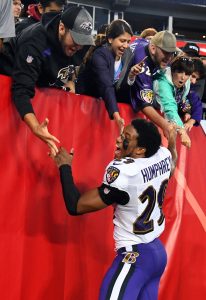 Humphrey, the No. 16 overall pick in the 2017 draft, inked a five-year, $98.75MM extension with the Ravens last fall. Still only 25, he’s fresh off of back-to-back Pro Bowl seasons, plus a First-Team All-Pro nod in 2019. In ’19, he started nearly every game for the Ravens as he notched three interceptions and three fumble recoveries, two of which were returned for touchdowns. Last year, he registered 82 stops, 2.5 sacks, one interception, and a league-leading eight forced fumbles.

Humphrey and the Ravens dropped the season opener to the Raiders, falling 33-27. They’ll try to get back on the right track this Sunday when they take on the Chiefs in Baltimore.