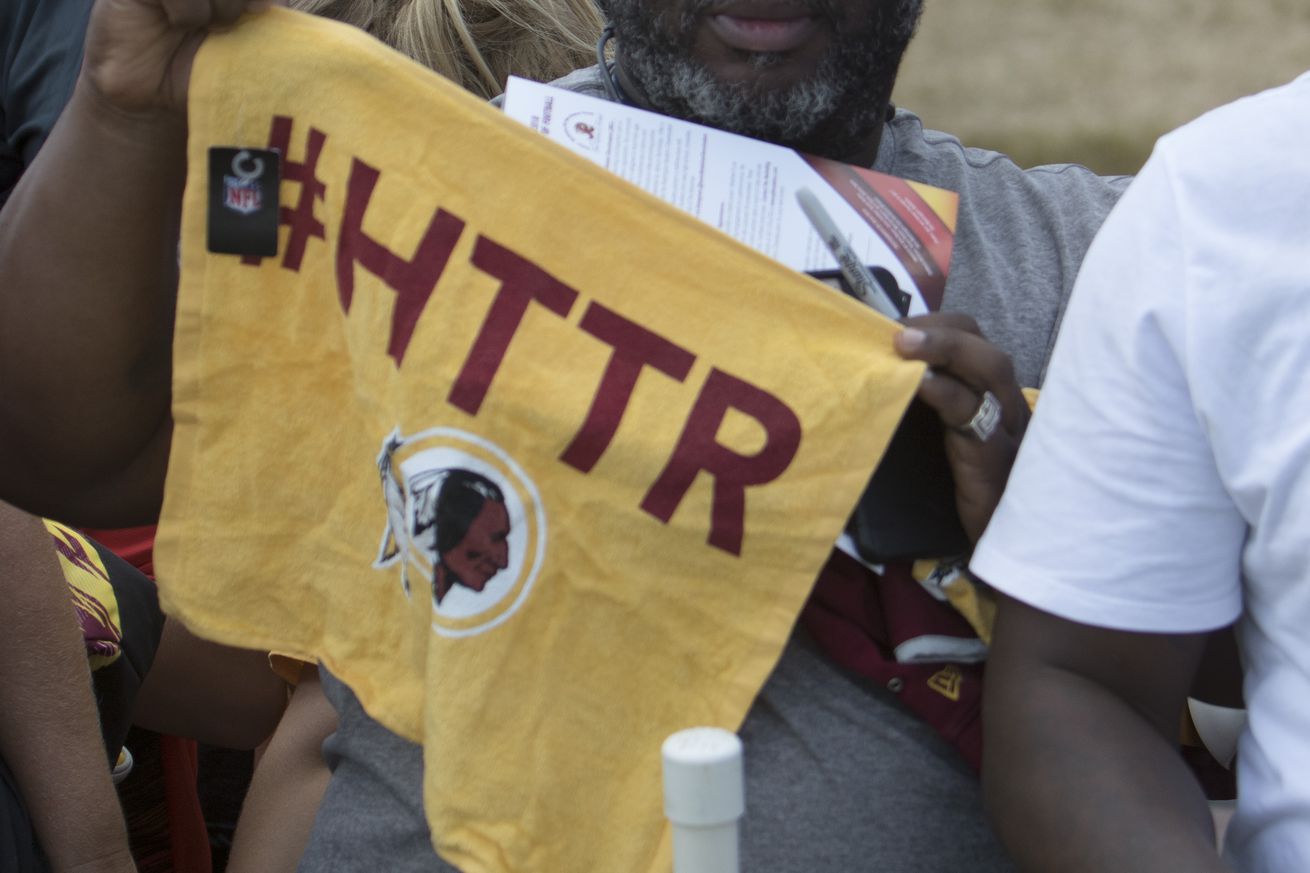 All atwitter will be posted at the beginning of every day (at midnight in Washington, DC). The goal is to give readers a handy spot to check the Redskins beat writers & bloggers, and national sports journalists to keep up on the latest news about the Redskins, the NFL, and sports in general, along with a smattering of other things.

The first known use of atwitter was in 1833

@TheHogfarmers Dunno if you would have seen it, but one of the members of Hogs Haven wrote a “thank you” note to you and Chase Roullier.https://t.co/3IrKYqIWEI

A message from Chase Roullier and the Hogfarmers ‍ as Destinee continues to fight Leukemia at St. Judes❗ pic.twitter.com/z0PCS1qbs2

Sending our friend Destinee and Family a package as they continue there journey at St.Judes Hospital battling Leukemia.#HogFarmers ‍ #HTTR pic.twitter.com/F9yIFxJeQE

11 y/o Destinee, a Die Hard Redskins fan has been diagnosed with Leukemia.

If you know a family that could use some assistance or just a smile, please DM us❗ #HTTR #ForTheKids pic.twitter.com/QQDujxrPji

Thanks for repping the Burgundy and Gold in Miami, Nathan! #NFL100 pic.twitter.com/0ypen0XbUk

Won’t cost much, GLUE GUY , and is still better than every TE that played for us in 2019. Obviously we still draft a kid; few better to learn from than Olsen. https://t.co/2ZJ0bsodja

With the second overall pick in the 2020 NFL Draft, the Washington Redskins should

It’s worth noting that my sources at the time (which is rare and not something I frequently claim to have, as you all know) had it as Dan Snyder who vetoed any talk of trading with Kyle Shanahan. Not Bruce.

If the #Redskins opt to pass on Chase Young and trade down for a haul, one of the better prospects they could land would be Young’s OSU teammate CB Jeff Okudah. I broke down his game for @TheAthleticDC: https://t.co/7oXbiVIMce

I think Young is very polished and ready to have an immediate impact right away with very little flaws in his game. I think the likes of Okudah are the “elite prospects” where they have tremendous upside and could become a top 5 player with development. I put Young above that.

Free agent TE Greg Olsen has added a third visit to his agenda. He’s also set to visit the #Seahawks, source said. Some real interest. So, Bills, Redskins and Seattle.

Greg Olsen is moving on and Joe caught up with him Tuesday to discuss his three playing options (and others?), along with broadcasting offers and his son’s health.

Was Trent Williams’ contract situation part of the reason he held out? https://t.co/0QC1v3ovdp

The Jaguars today will play two of their home games at Wembley Stadium over consecutive Sundays in London in 2020, making them the first team in NFL history to play two home games outside of the United States in the same regular season. Opponents TBD. Big news.

It may not happen this year, but I would look for the @Redskins to play internationally again & very soon.
Home games are a disaster, $$ can be made, BRAND exposure & fan base expansion is a huge priority. https://t.co/Rh7JTZOunv#Jaguars #NFLUK #Redskins #HTTR #Skins #NFL

Some context on the #Jaguars playing two games in London: My understanding is it’s not a permanent scheduling strategy. It’s a bridge through a $700 million project Shad Khan is embarking on with the city to build up the area around TIAA Bank Field. Could be one year only.

He had an opportunity to make a Championship Throw, and he missed it. That’s a pretty big litmus test as to whether he’s a Championship QB. https://t.co/Es4tFWrB1c

.@Chiefs v @49ers #SBLIV in a game that had 129 offensive snaps; and a rhetoric that says you could call holding on any given play; there wasn’t 1 offensive or defensive holding called. Odd? Coincidence? As a fan, do you like a game officiated like this? #BaldysBreakdowns

People just get angry after the Super Bowl, I’ve found.

Twitter has just been a toxic hellscape for two days now.

Everyone go get a glass of juice or something, for crying out loud

Called it a hunch yesterday. Hunch is getting stronger. Alex Smith is getting a Super Bowl ring. https://t.co/jIcHlQ0HuU

There’s been some reports they might move on from him. Patricia comes from Pats, probably knows Saban/Bama guys pretty well. Could be high on Tua and see as a chance to reset and buy more time to build.

The #Cowboys are unlikely to bring back Robert Quinn, plus more from the NFC East: https://t.co/9dPmlsUvk8

What 2020 rookies could we see making an impact in Super Bowl LV? @MoveTheSticks takes a look into the potential new faces in the NFL pic.twitter.com/jxTF0c9NsZ

Pro Football Hall of Fame safety Willie Wood, who played for the Packers from 1960-71, passed away Monday afternoon in Washington, D.C. Wood was 83.

Good news for the #Rams: Left tackle Andrew Whitworth will put off retirement for another year & is expected to return for 2020, sources say. He had surgery to clean out his ankle, is feeling great, and wants to play at 38. He’s also the team’s best option at LT for next season.

The far right shows the difference in perceived value between the Rich Hill chart (what NFL teams appear to use) and our Fitzgerald-Spielberger chart pic.twitter.com/JN942yuEYQ

BREAKING NEWS: The LA Chargers video team is hiring multiple positions. If you are interested slide into them DMs. For real, pls dm

The #Jaguars have hired former #49ers GM Trent Baalke as their director of player personnel.

There are a few obvious names — Fickell, Narduzzi — for the now open Michigan State job. But I wouldn’t discount 49ers DC Robert Saleh as a candidate for the job.

He coached there for 2 years, got a master’s degree from there, has an uncle who played there. It’s home for him.

Landry’s comments here match up with exactly what Todd Monken was allegedly telling other coaches around the league last year… After the opening scripted plays of each game, Kitchens threw the game plan out the window and no one had any idea what was going on. #Browns https://t.co/LBd3JtzQWn

The smuggled photos of a Bangkok immigration detention center are confirmed to be from a source linked to the catholic Church and the Thai government is not happy about it. pic.twitter.com/BYE2B3ZDIF

Everything you need to know about Twitter in three tweets. pic.twitter.com/9u9b9lPnqH

Is it too soon to call an only child a sextuplet? pic.twitter.com/bZ7QotZKuq

If the #Redskins are thinking of parting ways with Ryan Kerrigan (especially because they are going to draft Chase Young), then Vic Beasley could be a useful pickup if the price is right.

Could have a Preston Smith style bump after changing teams. Has all the tools. https://t.co/WNR5bzwLEZ

CALM DOWN! THIS IS BASKETBALL!

Tag a football player who needs to hear this! pic.twitter.com/CwiwMVXM4I