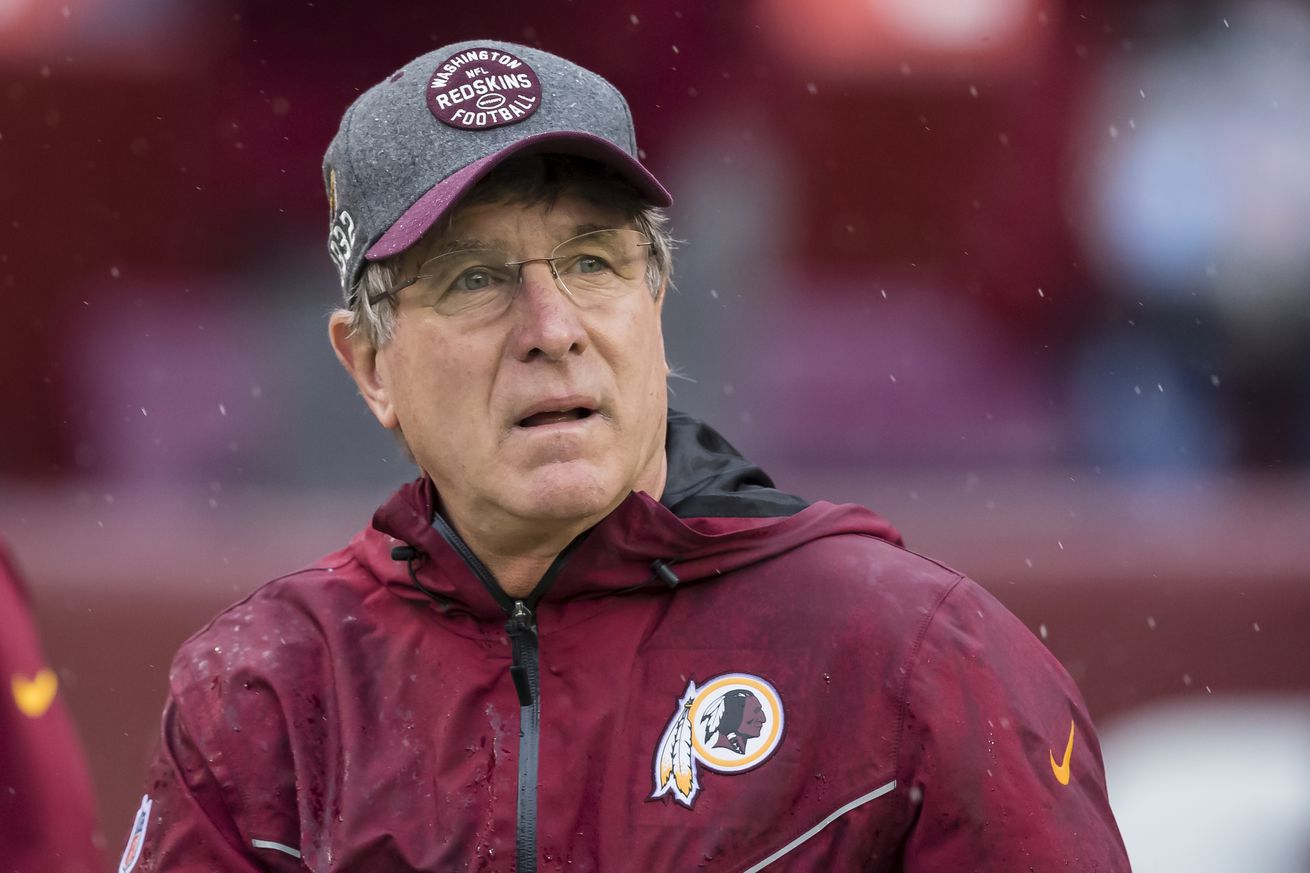 Redskins Head Coach Bill Callahan and Offensive Coordinator Kevin O’Connell spoke to the media today. Callahan gave several injury updates heading into this weekend’s game against the Jets. Paul Richardson is dealing with a hamstring injury from the Bills game two weeks ago. He hasn’t practiced all week, and this could be an opportunity for rookie Kelvin Harmon to get more playing time. Adrian Peterson is a machine. Vernon Davis is getting closer to returning from his concussion, but Chris Thompson is still dealing with turf toe.

Bill Callahan at the podium. On Montae Nicholson: He says he’s letting the legal process play out, but first gave condolences to the victim and her family.

Callahan said the Redskins are still gathering information on the Montae Nicholson situation. He won’t say if Nicholson will be allowed to play Sunday if healthy – Nicholson has been on the injury report and he last few weeks.

Discussed Montae Nicholson. Started by offering condolences to the young woman who passed away. Then into what’s next including the ankle injury. Sunday availability tbd. pic.twitter.com/yFFPUy9R3N

Receiver Paul Richardson did not practice again Friday as he rehabs a hamstring injury. There’s still a chance he plays this week but it could open the door for rookie Kelvin Harmon to get more time.

Callahan said Paul Richardson hurt his hamstring in Buffalo. The team is still waiting to find out if Richardson can play vs. the Jets, but he hasn’t practiced all week

Bill Callahan was asked about injured reserve for Vernon Davis and Chris Thompson. He didn’t really answer the question though.

Callahan said Adrian Peterson is “rare” when it comes to rehabilitation. “He’s exceptional.” Peterson was out for rest yesterday but was listed on the injury report with a toe injury. #Redskins #HTTR

Callahan to the podium. He praised Adrian Peterson’s ability to overcome injuries both physically and mentally.

Says he’s seen AP deal with a variety of injuries here in Washington, but somehow they never set him back… “He’s rare, he’s one of a kind.”

Offensive coordinator said Haskins had a good week of practice and the game plan against the Jets will largely come down to what plays he is comfortable with, which is growing every day. #Redskins #HTTR

Kevin O’Connell says he believes Dwayne Haskins can go out and deliver a strong performance on Sunday. The coach knows the QB has the skillset and the playbook will be tailored for him.

OC Kevin O’Connell said Haskins showed decisiveness against the Bills, which was one of the biggest things the coaching staff wanted to see.

Kevin O’Connell today on the game plan with Haskins at QB. Said the practice reps offers hope of opening the offense, but ultimately there’s the team approach to consider. Wrote about KOC’s play-calling in relation to Callahan’s plan here. https://t.co/vMjApY0Ad9 pic.twitter.com/DtoJYOunzv

O’Connell said they haven’t really had to repeat things to Haskins during practice, which is another sign of his continued growth.

OC Kevin O’Connell says Dwayne Haskins has really begun to “develop a process throughout the week.” Adds it has been “fun to watch” his rookie QB improve week-to-week and will look for an increased comfortability within the offense from #7 on Sunday.

O’Connell when asked about the advantage of both Peterson and Guice in the backfield at once: “you guys always ask these questions. You don’t think the New York Jets aren’t listening?”

O’Connell with some very high praise for Jets safety Jamal Adams. Said that there might not be a better safety in terms of his overall impact. Then compared him to former Steelers great Troy Polamalu.

O’Connell: We knew Terry McLaurin was going to be a very good receiver. We didn’t expect him to be our X receiver. #Redskins #HTTR

Kevin O’Connell talking about adjusting the offense without both tight ends Reed and Davis: “it’s definitely a factor”