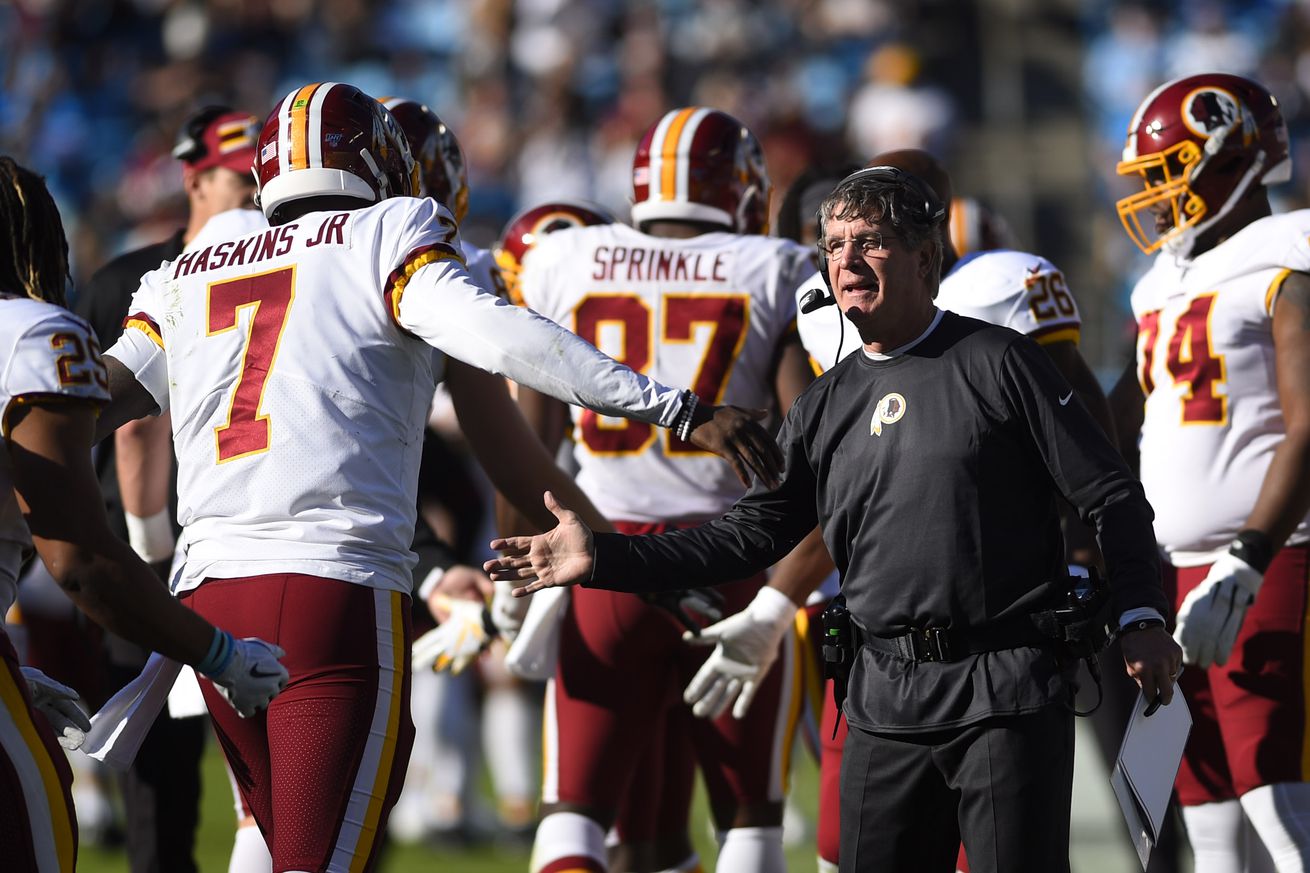 Bill Callahan talks about the Redskins win over the Panthers

The Redskins won their 2nd game in a row, and their 3rd of the season, when they defeated the Panthers 29-21 yesterday. Interim Head Coach Bill Callahan had a lot of praise to go around from Dwayne Haskins Jr. to Adrian Peterson/Derrius Guice to the defense and newcomer Nate Orchard. Haskins also spoke after the game and talked about his 2nd win as a starter.

Callahan says this was a group effort in the running game. OL led the way, but he was really impressed with the way the TE’s blocked and the WR’s too.

Callahan said after the first two drives, the coverage settled in and that let the rush plan take hold. He really liked their plans. Just had to sure up the execution.

Haskins to the podium. “It’s so much fun watching those guys run…I challenged those guys. Said I need a 50 yard run and (Derrius) had a couple of big ones today. I try not to buy a ticket back there. It’s fun.”

Dwayne Haskins on his play and mentality. #redskins pic.twitter.com/hNlRXUdXZP

Callahan at the podium. He sees a “huge” improvement in the way Haskins is using his legs, both in the throws themselves and by taking off.

Callahan said called the Panthers game “interesting” when it came to Haskins’ footwork. Said the way Haskins used his eyes and feet together was impressive. #Redskins #HTTR

Callahan to the podium.

Asked about Haskins footwork. He says there’s been a major jump linking his eyes and feet. Additionally he did a good job a few times making plays with his feet, but also had a few where he ran into stuff.

Callahan calls Guice and AP tough runners with explosive traits. He won’t compare them but likes having both on the field

Callahan on Adrian Peterson and Derrius Guice: They’re durable-typed runners that are also elusive. “It’s been good having both of them on the field.” #Redskins #HTTR

Callahan says of Guice “I see a player continuing to emerge.” Says they’re still learning what he can do in his overall game.

Ironically, one of the runs Callahan thinks of when he thinks of Guice is the one where he torn his ACL against New England last preseason. Called it a powerful run that displayed Guice’s potential. #Redskins

Asked how different the season might have been with Guice healthy all year, Callahan doesn’t bite – ‘I don’t look back, I’m always looking forward.’

Asked about Guice’s maturity as a player despite his inexperience and Bill said they’re really still figuring out what he can do. They’ve seen so many flashes, but they’re just getting started with figuring out all the ways he can impact a game.

Callahan said the by and large, the offensive line played really good and they did well with adjusting to different pressures they saw throughout the game. #Redskins #HTTR

When asked about @nateorchard44, Callahan specifies the second-and-goal play at the end of the game. Orchard brought down McCaffrey to prevent what would have been a touchdown. #Redskins

Callahan: “When you’re down 14, you can easily panic.” #Redskins #HTTR

Callahan on Skins comeback – “We relied on our defense, I give lot of credit to those guys.”

Callahan does believe that some of his changes at practice are working in the field now, particularly at QB for Haskins

Callahan believes the changes he’s implemented since taking over as interim head coach are paying off. #Redskins are 3-4 since Callahan took over after Week 5.

End of first half:

Asked Callahan about the end of the first half. He said he liked how they handled it, but the sack killed the plan. They wanted to milk a little bit of clock because they had all 3 timeouts, but the late sack screwed up the optimal plan.